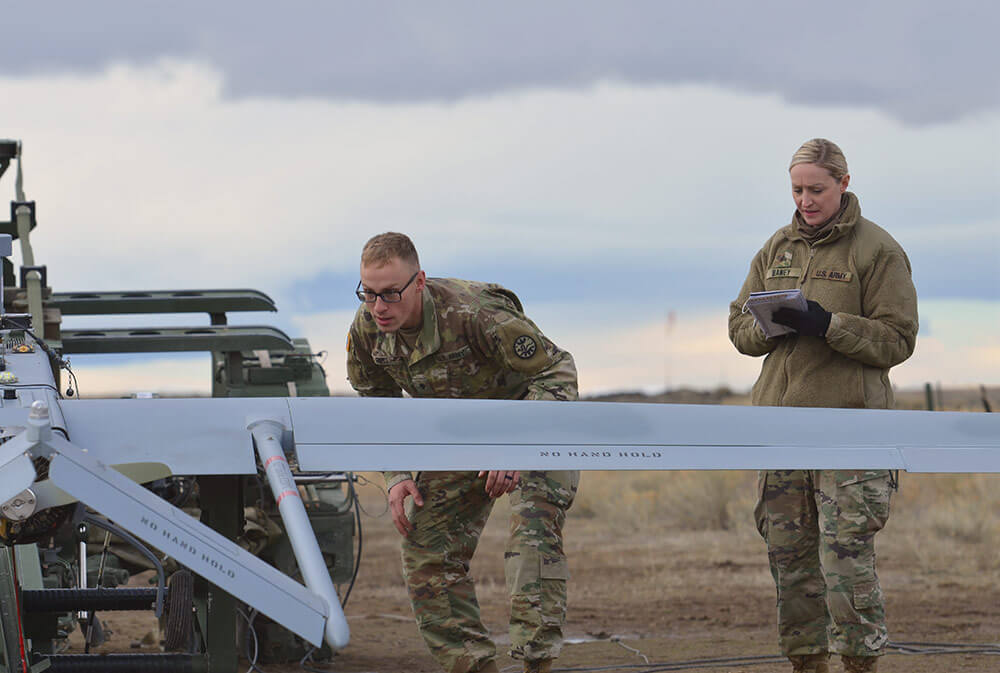 For Soldiers who feel the need for speed, yet retain a desire to keep their feet firmly planted on the ground, becoming a 15W Unmanned Aircraft Systems (UAS) Operator just might be the right military occupational specialty (MOS). A 15W is tasked with operating aircraft such as the RQ-7 Shadow or MQ-1C Gray Eagle, two of the Army National Guard’s more elusive, yet powerful, assets.

UAS operators remotely pilot unmanned observation aircraft, also referred to as drones or Unmanned Aerial Vehicles (UAVs). 15Ws are a critical component to the National Guard’s dual mission of both serving the Nation domestically and serving abroad in the protection of the United States and its allies from external threats. By directing the aircraft while on the ground, these pilots gather intelligence used in operational tactics. Drone operators are intelligence specialists who are essential in providing information that increases a command’s situational awareness, whether that information is about enemy forces, battle areas or search and rescue efforts after a natural or manmade disaster.

“They can be the eyes for the on-scene commander or whoever is commanding an emergency management center,” said Christina Engh, an aviation management and program analyst with the Army National Guard. She said the RQ-7 Shadow recently played an important role in mitigating wildfires in Northern California.

According to Engh, the immediate access to information that the UAVs offer not only helps to speed recovery efforts, but also increases Soldier safety, as it limits Soldiers’ direct exposure to hazardous environmental conditions that may be present after a natural disaster. The UAVs also give the crews on manned helicopters more freedom to focus on transporting civilians to safety, and personnel and materials to areas in need. Engh noted emergency response to be “the perfect opportunity for this type of unmanned aircraft.”

Engh added that the Shadow, which requires five Soldiers to operate, can be launched at a safe distance from a disaster area because of its nine-hour maximum flight time. It also has infrared equipment that can locate firefighters and Soldiers on the ground during nighttime operations.

“If [Soldiers] are close to a fire, they are in harm’s way,” she said. “For the California fires, they were able to launch the Shadow 30 miles away from the fire, get in to see what’s going on and bring it back.”

The duties of a 15W operator require the ability to skillfully analyze and organize information. How well those tasks are accomplished can affect the overall outcome of a mission.

“It takes a lot of intellect, “said SGT Melissa Baney with D Company, 116th Brigade Engineer Battalion, Idaho Army National Guard. “You can’t just sit there and plug numbers. It pushes you mentally. Even to get to the point to just start the engine, you’re going through at least 100 steps in a checklist. The technical aspects of it are very complex.”

SGT Baney went on to describe what it is like to prepare for and operate a UAS mission. “The flight line is not set up for you when you get there. The only thing you have is a runway. So when we first get out to the flight, we have to place the entire flight line. We have to set up all of our shelters, our runway gear, our launchers—everything that goes into it. And that can be anywhere from a one-day to a three-day operation. So it’s a lot of physical labor. Then, once you have your flight line set up, you get into the shelter, and you sit there for hours and hours of flight. The inside of the shelter is basically a cockpit. You crawl inside to the shelter on the back of a Humvee. You’ve got two chairs, and you’ve got the person who flies and the person who operates the camera.”

SGT Baney described the duties of a 15W to include preparing for flight missions through planning and analysis; executing preflight, in-flight and post-flight processes on the Shadow; as well as launching and recovering UAVs from airfield runways. 15W duties also include conducting air reconnaissance, surveillance, targeting and acquisition missions; and performing maintenance on communications equipment, power sources, light/heavy wheeled vehicles and crane operations. Once SGT Baney completes a mission, the video from her aircraft is sent to her brigade headquarters where air recon, surveillance and targeting and acquisition missions are planned.

With over 23 weeks of Advanced Individual Training (AIT) that includes on-the-job instruction, 15Ws are well prepared before piloting an actual mission. Training consists of both classroom and in-the-field instruction. Operated by the 2nd Battalion, 13th Aviation Regiment, the UAS Training Center at Fort Huachuca, Arizona, offers Soldiers instruction not only in the fundamental tasks associated with the completion of UAS missions, but also in the operational role of the UAS within the scope of reconnaissance, surveillance and target acquisition missions. Students enrolled at the training center also learn how to identify targets and combat equipment on the battlefield. Using the Federal Aviation Administration (FAA) Unmanned Ground School module, Soldiers are taught the basic aeronautical knowledge required to safely operate a UAS in tactical airspace.

As the only Army MOS that includes flight training at the enlisted level, becoming a 15W may also offer advantages in the civilian job market. Since 15Ws train in the FAA ground school module during UAS training, Soldiers who are interested in becoming commercial pilots may have a leg up when attempting to transition into the field.