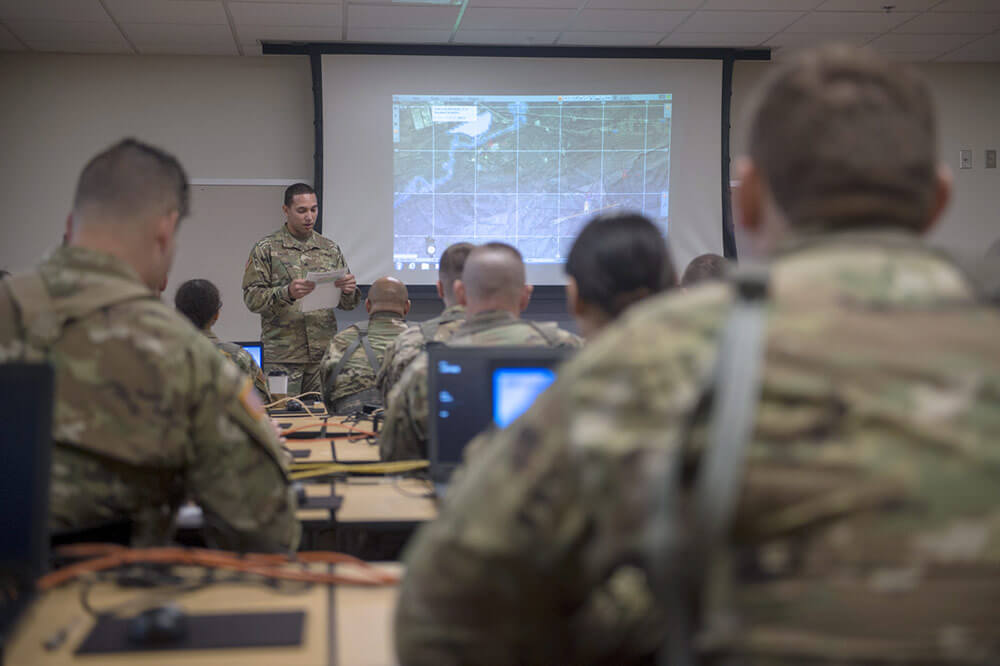 According to a 2018 study by Electronic Entertainment Design and Research, 67 percent of Americans utilized gaming technology, whether for sport, play or training on multiple platforms from smartphones, tablets, gaming stations, computers, handheld gaming systems and more.

But what if that technology could benefit military service members and train them more efficiently?

“Basically it’s a network of up to 50 computers where I create a realistic training environment that unit members get submerged into to replicate the training they’re going to see overseas or in other parts of the world,” said Eric Will, VBS3 Integrator.

“We fall under Global Threat Mitigation Program [GTMP], which covers the active side and the National Guard side,” Will said. “Our side is the Asymmetric Threat Training Support [ATTS] program fully funded through the National Guard Bureau.”

In this particular scenario, each Guardsman is assigned to a vehicle that is part of a tactical convoy. The unit is given a mission and must execute each step of convoy operations, utilizing the virtual platform, while maintaining radio communications with their Tactical Operations Center (TOC), just as they would in a real-world situation.

“We created scenarios to replicate the environment that they’re going to be in [during the XCTC] and to meet the commander’s training objectives,” Will said. “More specifically, to gain convoy experience and to learn how to react to [enemy] contact in different forms.”

To provoke chaos, Will injects challenges throughout the scenario based on actual enemy intelligence their program receives on a weekly basis, forcing individuals to think on their feet. By doing this, Soldiers are able to work out any kinks and re-engage standard operating procedures in order to complete their mission successfully.

“An ideal training picture would be to get classroom instruction from the live C-IED integrator as part of the crawl phase, then come to the VBS3 simulator, which would be the crawl and walk phase, and then to go back to the live integrator and do a walk phase and run phase for the C-IED,” Will said.

From seasoned Soldiers to novices, this blended training approach allows unique collaboration and active learning that stems deeper thought behind each scenario rather than focusing solely on tactics.

“The biggest thing is stimulating that thought process,” Will said. “Tactics change and enemy tactics change, and we have to adapt.”

With this technology, along with the National Guard’s training schedule, trainers like Will and Crane are able to teach Soldiers within a matter of hours versus what would normally take months to learn.

“I can take a unit that has little to no experience and in about four hours, running through a couple of scenarios, it will be like they’ve been deployed for several months already,” Will said. “I like to see that development come into play and build that leader’s confidence.”

As readiness is key for the Oklahoma Army National Guard, utilizing this type of technology helps units better and more efficiently prepare for real-world missions, whether at home or abroad.

“Earlier, a Soldier said that the discussions we had in this class got him to think about things that he never would’ve thought about before,” Will said. “My bottom line is, if I can relay something that saves a life later on, then that means everything.”