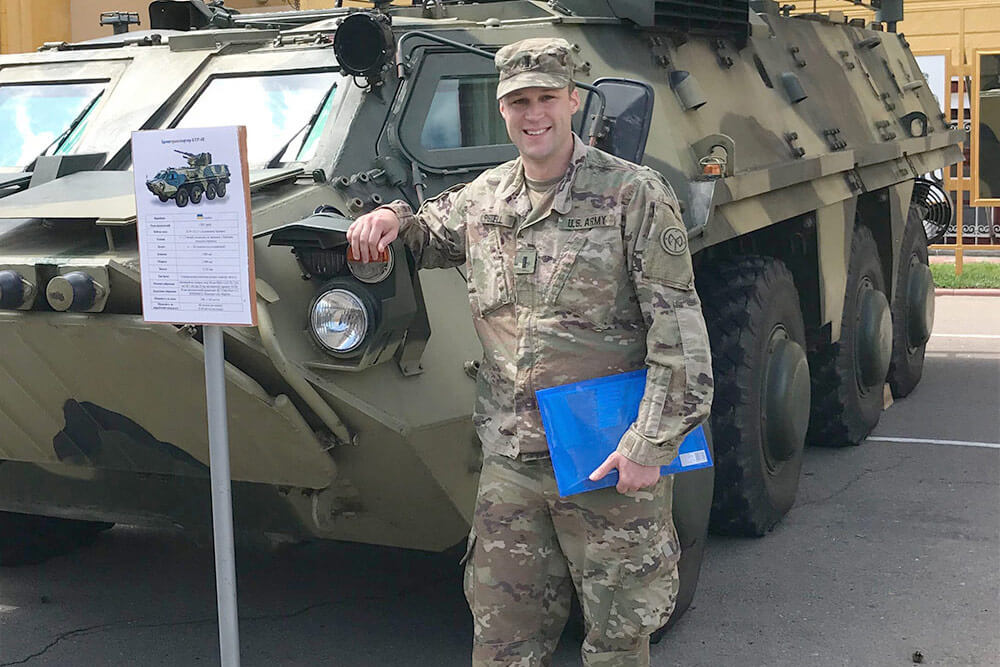 When 1LT James Pistell was unsatisfied with the mapping app available to Soldiers during his last deployment, he sought to create a solution. 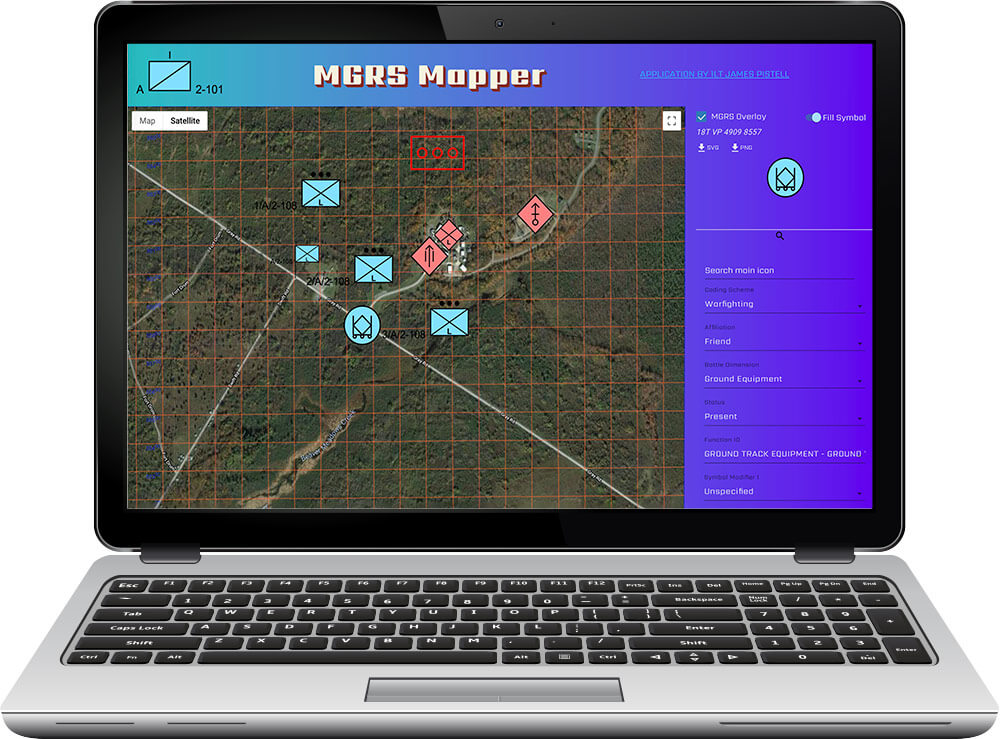 “It’s a tool developed for junior leaders to rapidly create what we call CONOPS,” 1LT Pistell explained. “It’s a simple tool that interfaces with Google Maps and a program that allows you to search and select for U.S military map symbols.”

1LT Pistell was inspired to independently create the application after a deployment to the Ukraine in 2018. After using a similar, yet out-of-date, application, 1LT Pistell believed he could improve the app’s functionality to make a better version.

“I got the idea in my head that when I got back home from Ukraine, I was going to [create an app],” 1LT Pistell said. “After my deployment, I had a couple of weeks to myself. I locked myself in my apartment and worked on [the app] for about a month.”

With MGRS-Mapper, users can select their operations area on Google Maps and overlie the region with a standard MGRS overlay. MGRS is the geocoordinate standard used by NATO militaries for locating points on earth. The app allows users to select the proper NATO standard graphic symbol, label it and then place it on the map. Users can place command and control, fire support, maneuver and other graphics on the overlay. The overlay can then be downloaded and emailed to another user, printed out as a handout or embedded in a slideshow.

1LT Pistell designed the application to be as user-friendly as possible.

“If you’re looking for infantry you can choose an infantry symbol, then choose the size and click and drag it on the map,” explained 1LT Pistell. “You can update the map, you can put the overlay on, you can take it off and you can have terrain view or satellite. I’ve made the application as intuitive as possible.”

While 1LT Pistell is pleased with his work, he said it did not come without challenges.

“I’m pretty sure I went bald just from the stress,” 1LT Pistell said jokingly. “It was very challenging. I would solve one problem, then come up against three or four other [problems] that I didn’t even know existed. I thought about giving up many times.”

Thankfully, 1LT Pistell did not give up, but instead stuck to his guns and put out a successful application. MGRS-Mapper is now available to assist Soldiers with improved CONOPS.

“It has made the development of CONOPS a lot quicker,” 1LT Pistell said. “And if you need to learn what a military map symbol looks like, you can use [MGRS-Mapper] to pull up a symbol and research how it looks.” 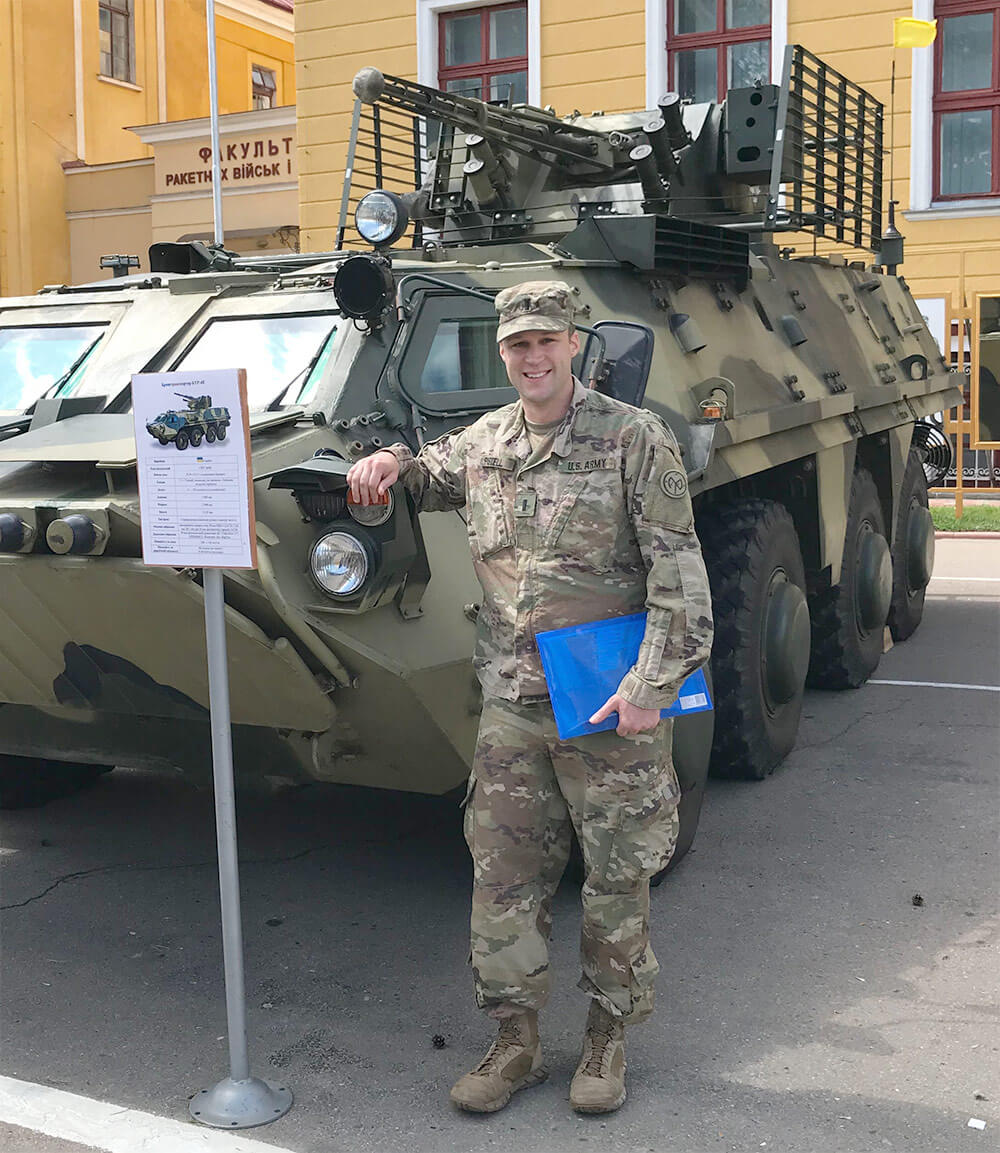 While 1LT Pistell is a cavalry scout in the Guard, it was his civilian background as a technical marketing manager that gave him the know-how to build the MGRS-Mapper. In the four years he’s been building and programming websites, 1LT Pistell has created several web applications. None, however, have garnered the attention and praise of MGRS-Mapper. After sharing the application online, 1LT Pistell gained exposure from some unexpected sources.

“I shared it [with the Army group] on Reddit and it got a couple hundred upvotes there,” he said. “It didn’t get too much traffic at first, but then I started getting emails from people saying ‘Hey, I saw this on Facebook,’ and I don’t recall ever posting it on Facebook. So, it was Reddit that got the ball rolling and then it all kind of snowballed. I’ve been getting emails from a bunch of people, which is really nice.”

1LT Pistell reports having received positive reviews of the app from fellow Soldiers and some have even offered suggestions on how to improve it.

“I’ve received emails from Soldiers saying they use the app and they gave me tips or asked questions about the app and new features I could implement,” said 1LT Pistell. “A lot of people are actually using it, even people I never thought would use it. A search and rescue team in California is using the app. That’s pretty cool. I had no idea they would find any utility in it at all. There’s an entire [Basic Officer Leader Course] class using it and that’s like 80 people that are using it every day. It’s so awesome.”

MGRS-Mapper can be accessed for free at MGRS-Mapper.com. 1LT Pistell said he looks forward to implementing improvements to the app soon, including better functionality for mobile devices and various browsers.

“It’s pretty fulfilling,” 1LT Pistell said. “After all those weeks I spent pulling my hair out, it feels really good to create something that people actually use. It feels good to help people.”