As Germany and Japan were wreaking havoc throughout the world in 1939, many Americans felt that the overseas wars decimating Europe and the Pacific were not their problem. U.S. military planners, however, knew that it was just a matter of time before the United States would be pulled into the conflict, quickly becoming known as World War II. The U.S. Army was dangerously ill equipped and suffering from neglect, restricted budgets and an overall sense of complacency. It needed to modernize now in order to fight and win in the impending conflict.

Planners knew one of the U.S. Army’s biggest problems on the modern battlefield was its reliance on horses and mules to transport equipment. World War I showed that four-wheel drive trucks and motorized transports could haul more men and equipment farther and faster than any animal. The Army needed a small, four-wheel drive truck that could move personnel and equipment on and off road, quickly getting them to the battlefield.

In June 1940, the U.S. Army put together a commission to study the need for a light, motorized vehicle to support infantry and cavalry troops. After examining various vehicles that were already available in the civilian automotive market, the Army concluded that no vehicles were durable enough nor were they configured to meet the military’s needs. At the same time, the Army was also looking for a vehicle that could be used as a small, go-anywhere reconnaissance scout car that could quickly deliver messages and function as a portable weapons carrier. 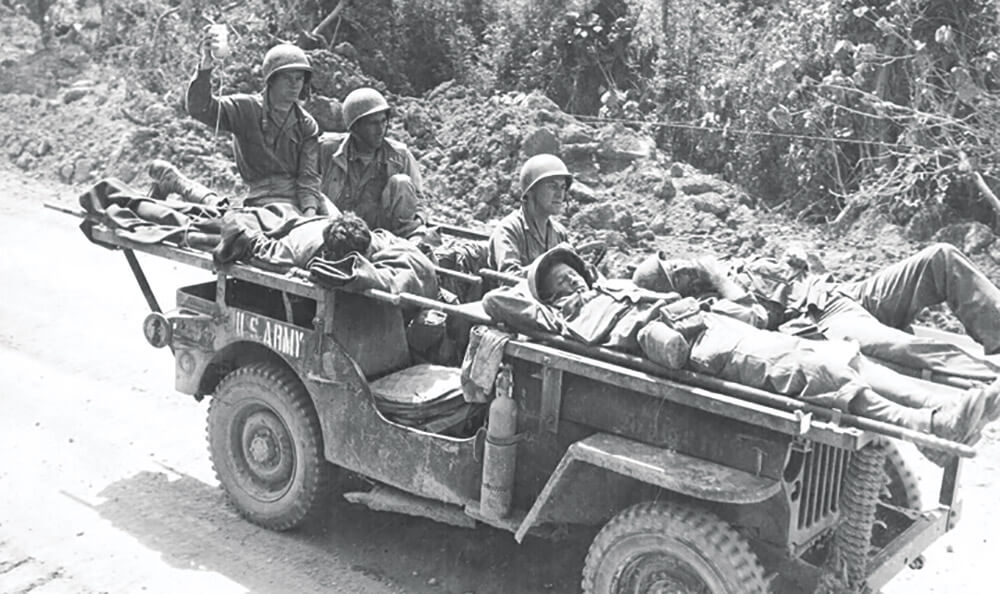 After the commission failed in its efforts to find an appropriate vehicle, the chief of infantry decided to see if any American companies could design such a vehicle from scratch. He subsequently drafted the vehicle’s necessary specifications and sent them to the Quartermaster General for comment, at which time the Quartermaster General took over the procurement process.

On June 27, 1940, the Quartermaster Corps sent out 135 bid invitations to companies that could possibly design such a vehicle. The bid, however, required prototype plans to be submitted in less than a month, which was nearly impossible. Only two companies responded—American Bantam and Willys-Overland. They were the only two U.S. manufacturers selling cars smaller than the standard American size and still building four-cylinder vehicles. Both companies were also small and flirting with bankruptcy.

In an attempt to stay financially solvent, the Bantam Car Company developed and submitted a comprehensive set of prototype plans by the deadline of July 22, 1940. They were then awarded the contract to build 70 vehicles for testing. The drawings submitted by Willys-Overland were not as extensive and were subsequently rejected.

As Bantam’s vehicles were being built, the Army grew increasingly concerned that it may not be getting the best vehicle possible for such a vitally important program. They also feared that Bantam was such a small company that it may not meet the nation’s manufacturing needs should war break out. So they reopened bidding to two other competitors: Willys-Overland, because of their expertise in building small cars; and Ford Motor Company, which had tremendous production capabilities.

Willys-Overland and Ford were invited to watch the testing of the Bantam car once it was built; they were also given an opportunity to thoroughly examine the vehicle and copies of its blueprints. After studying Bantam’s prototype, both manufacturers designed and built their own vehicles to compete for the government contract. Ford developed the Pygmy and Willys-Overland built a vehicle they called the Quad.

All three vehicles were then tested and compared under some of the most grueling conditions imaginable. As weaknesses were found, each company would fix, and sometimes redesign, their vehicles. By the end of the trials, each company had finalized their vehicle’s design for bidding; Ford called its vehicle the GP, Willys-Overland had the Willys MA, and Bantam had the BRC-40 and the MK II. Thousands of prototypes were built and tested.

During testing, it is believed that the vehicle earned its nickname “Jeep.” All three prototypes shared the same common military designation: “truck, ¼ ton, 4×4,” but historians cannot precisely determine who coined the nickname. Nearly all Army vehicles are General Purpose, or GP, and Soldiers often slurred the acronym together. Years before the development of the prototypes, Soldiers nicknamed a gun-hauling tractor the Jeep. 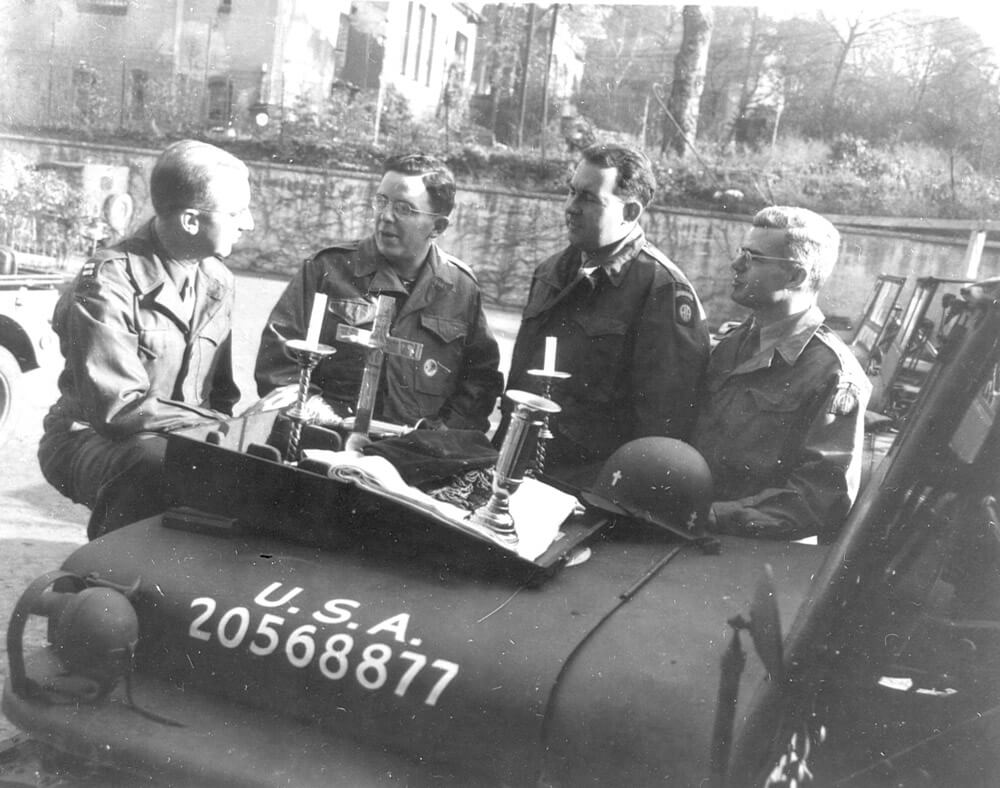 In February 1941, a journalist was being hauled up and down steep steps in a Willys MA. When the journalist asked the driver what the vehicle was, he replied, “It’s a Jeep!” The journalist subsequently used the name in a story that ran across the United States, and the name eventually came to represent the MA. Recognizing its marketing potential, Willys-Overland would soon copyright the name. Throughout the war, the vehicle had many nicknames, which included the Peep, Blitz-Buggy and the Soldier’s Friend, among others, but “Jeep” inevitably stuck.

Vehicle testing continued unabated throughout the summer of 1941. Design changes were made, such as collapsible windshields so the vehicles could be stacked better during shipping, and the removal of key ignitions because Soldiers kept losing the keys.

With improvements continuously made to each prototype, the Army finally decided that the Willys MA, with a stronger motor than the others, was the best choice. Willys-Overland was awarded a contract to produce 16,000 vehicles by January 1942 for $748.74 per vehicle. The final design was modified to use the Ford’s slat-type grill and front end, which is now the iconic grill still seen on today’s Jeeps. The new vehicle was called the MB.

Just before the order could be filled, Japan bombed Pearl Harbor on December 7, 1941. The United States was dragged into World War II and the Army immediately needed more equipment and men.

To move these vehicles to the troops as fast as possible, the U.S. military increased their order and then gave Ford contracts to build thousands of vehicles based on the Willys MB. Over the next few short years, both companies produced 637,770 Jeeps, with Willys-Overland building the most with 359,874 MBs and Ford building 277,896 GPWs. Both companies were producing Jeeps at a rate of one per 90 seconds during the war. So many Jeeps were being built that some German soldiers, it was believed, thought that every U.S. Soldier was issued their own Jeep. Around 30 percent (182,597) were shipped to Allied countries as part of the Lend-Lease program. Bantam was awarded a contract to build trailers for the Jeep.

Soldiers raved about the vehicle and its versatility on the battlefield. Jeeps were believed to be able to go anywhere, delivering troops, supplies or serving as a weapons platform. Chaplains celebrated communion on the flat hood and officers used it to brief battle plans or stand atop it to address their troops. The engine manifold was often used to heat C-ration cans, and if a little water was drained from the radiator, it could be used for hot water to shave.

Jeeps were also modified to plow snow; operate in the desert; function as an ambulance, tractor or firetruck; lay telephone cable; and operate as a generator. Indeed, if given the right wheels, the Jeep could be reconfigured as a small railroad engine. Jeeps were small enough to be loaded on aircraft and even fit in gliders for the D-Day invasion. They were customized to provide any need.

Soldiers raved about the durability and toughness of the Jeep. Ernie Pyle, a WWII Army correspondent, said, “Good Lord, I don’t think we could carry on the war without the Jeep. It’s as faithful as a dog, as strong as a mule and as agile as a goat.”

On October 13, 1942, a Willys MB, nicknamed “Old Faithful,” received two shrapnel holes in its windshield while being shelled by a Japanese battleship on Guadalcanal. The Marines that she belonged to awarded her the Purple Heart for “wounds” received on Lunga Beach. The Jeep survived two beach landings; it was the first to land on Guadalcanal and among the first during the Bougainville invasion. 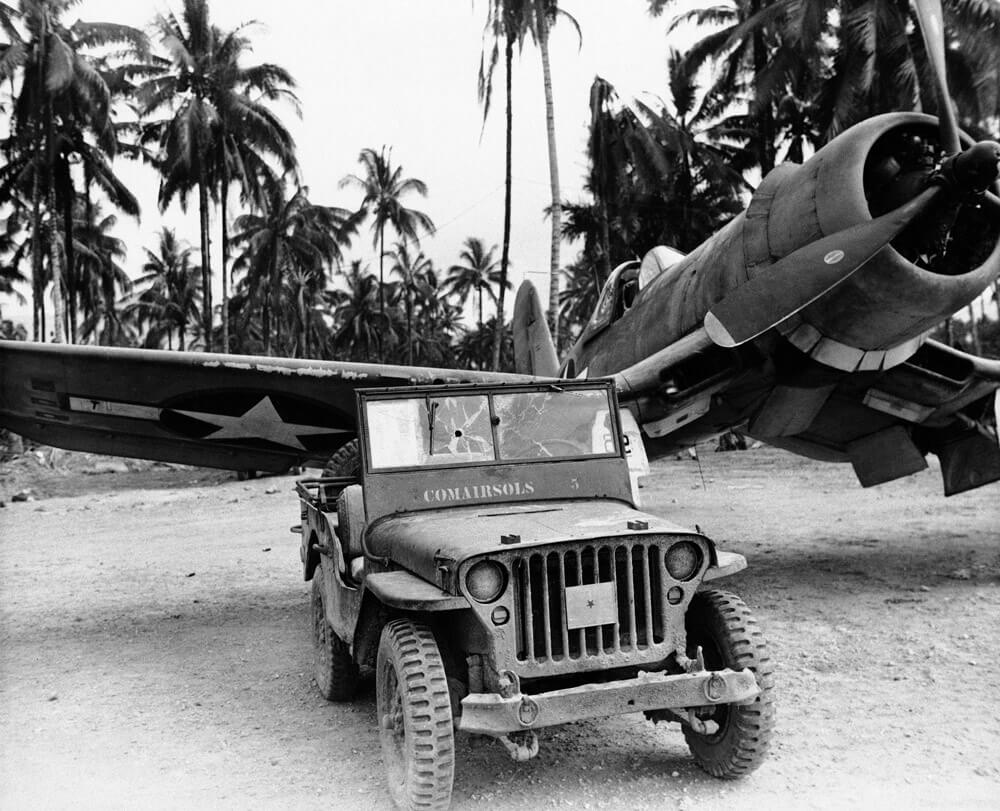 The Jeep was retired after 18 months on December 22, 1943, having traveled more than 11,000 miles of jungle terrain in Bougainville as a command car for four different Marine Generals. It was the first American vehicle ever decorated with a Purple Heart and spent the rest of the war on display during bond tours.