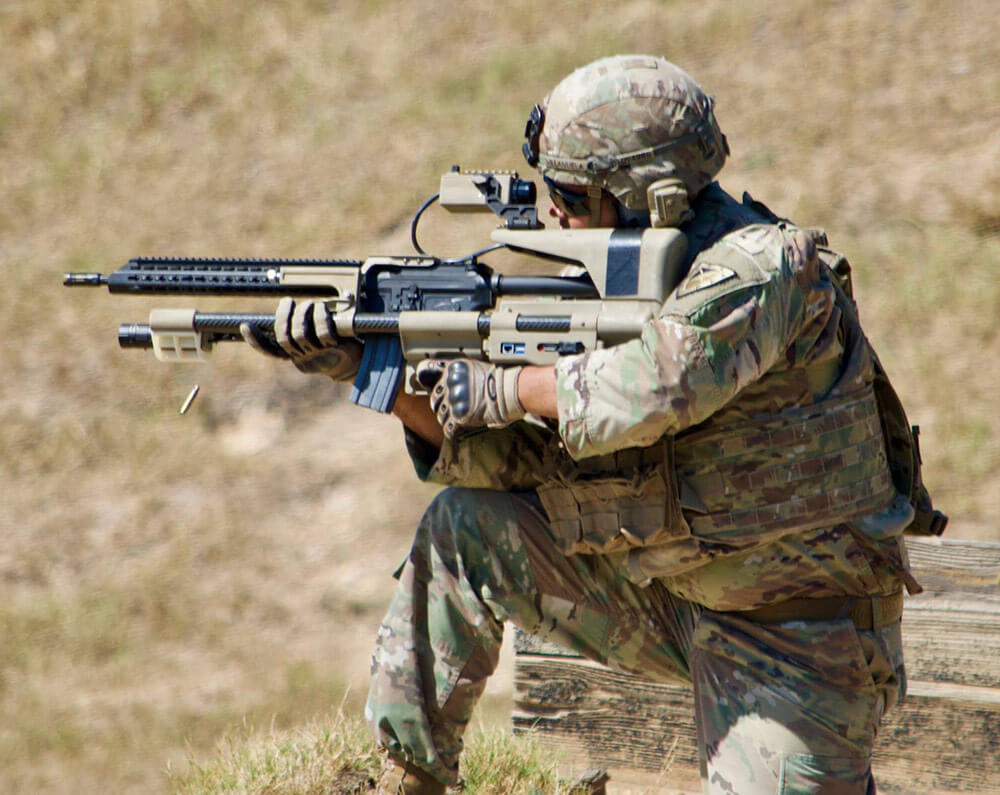 Soldiers will soon have access to a higher level of accuracy in individual weapons control with a cutting-edge piece of technology – an active stabilization system developed by AimLock. With an appearance that looks like something from a sci-fi movie, the AimLock MRRTM mid-range rifle chassis is a sensor-based platform that gives Soldiers computer-based targeting and fire control.

The project to bring AimLock™ technology to the battlefield began in 2012 when the Department of Defense (DoD)’s Defense Ordnance Technology Consortium contracted AimLock™ to collaborate with the Joint Service Small Arms Program (JSSAP). Together, JSSAP and AimLock™ are currently working to refine the technology that would translate a shooter’s intent into high-probability execution with every shot, using any firearm, in any situation.

The system can be easily configured to accept almost any existing firearm and is designed to remove virtually all user error, greatly increasing accuracy. Lightweight and easily retrofitted, the AimLock™ system requires minimal modification to the weapon it is enhancing.

The stabilization system works by allowing a computer that is retrofitted to a weapon to adjust the direction of the firearm’s barrel, which “free floats” inside of the exoskeleton of the AimLock™ platform. The computer simultaneously keeps track of both the target and the barrel. It uses electromagnetic actuators to autocorrect the firearm and continuously compensate for aiming errors. Electromagnetic actuators, also called power transducers, are electrical devices that transform energy to mechanical work. The principle of transformation in these actuators is based on force interaction in a magnetic field. The actuators help keep the weapon on target whether the Soldier is swaying, riding in a bumpy vehicle or simply not able to keep up with the target.

The program between JSSAP and AimLock™ was given the acronym F.I.T.E.S: Future Integral Target Engagement System. Phase One of the F.I.T.E.S. program focused on advancing handheld prototypes to technology readiness level 4 (TRL-4) for testing and evaluation. In this phase, the program relied on a technological fusion of embedded computing, microelectromechanical systems sensor integration, computer vision and lightweight materials.

Phase Two of F.I.T.E.S., which began in 2016, consists of a three-year tasking road map to further the development of AimLock™ technology across a broad range of small arms applications –including crew-served and remote weapon applications – resulting in prototypes up to TRL-6 for field testing and evaluation.

“The [individual] platform is not tied to any specific weapon, but the M4 [and M110] were chosen as technology demonstrators,” said JSSAP Project Management Engineer Terence Rice. The idea is that any Soldier can slide any weapon onto the platform and increase their accuracy.

F.I.T.E.S. also offers the added benefit of increased Soldier safety and survivability as the platform will allow Soldiers to quickly recognize targets using computer vision technology. The system utilizes active target detection, which continuously searches the field of view for known target profiles and highlights them for the Soldier, who will ultimately decide whether or not to pull the trigger.

Currently, F.I.T.E.S. technology is scheduled for incorporation into the Army’s Future Vertical Lift program – the DoD’s plan for a family of five military helicopters of varying sizes that will share common hardware such as sensors, avionics, engines and countermeasures – in fiscal year 2019.