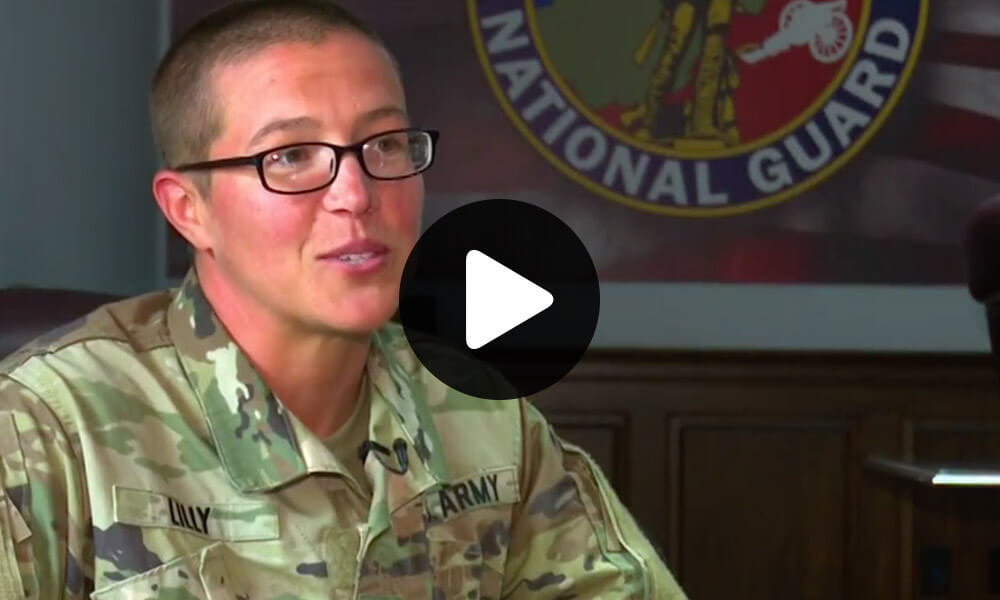 No stranger to historic firsts, 1LT Lilly was also the first female in the Army National Guard to enter into a combat MOS as an armor officer. When she joined the West Virginia Army National Guard in 2013, 1LT Lilly had not an inkling of the history-making achievements she would accomplish in just a few short years.

She joined the Guard at 33 years old after working 10 years in retail – all the while wanting a more rewarding career.

“With two small children at home, I wanted something that would make them a bit prouder of what I was doing,” explained 1LT Lilly. “I started looking at other options that were more community service-oriented. I saw that the National Guard had some postings out there, and I thought I’d like to go out on disaster relief efforts so that sparked my interest.”

Joining the Army National Guard in her 30s, 1LT Lilly expected the transition to be tough on her physically. However, she quickly realized that she was more capable than she had imagined.

“Initially when I joined, I thought that everything in the military was going to be very tough for me because I was older,” said 1LT Lilly. “I was 33 when I joined and 34 at Basic Training. Once I went through my training I was like, ‘wow – I’m doing things I never thought I’d be able to do and I’m doing them well.’”

Her journey to Ranger School began in August 2014, when the pilot program allowing women to join Ranger School was launched. She was fascinated by the new opportunity, but initially wasn’t sure if she was the right fit for the program.

“At the time I thought, ‘that’s really cool, but that’s way above my level,’” she recalled.

Still – always willing to take on a new challenge – 1LT Lilly joined the Ranger PT program and soon found that, contrary to her original thought, it was not at all above her level.

“I got in their PT program and the instructors said, ‘you know, you could probably do this,’” said 1LT Lilly. “They wanted me to go [to Ranger School] at that time, but due to funding requirements through the State, there was no way for me to go during the test program.”

Missing out on the pilot program did not stop 1LT Lilly from continuing to physically and mentally prepare herself for possibly attending Ranger School in the future. She followed the Ranger School trail program closely and sought out as much information as possible. Wanting to ensure she would meet the minimum physical standards for the Ranger course, over a span of three years, 1LT Lilly completely changed her training regimen. 1LT Lilly trained six days a week for a total of 20 hours each week to prepare herself for Ranger School. Three days a week included an hour and a half of upper body-focused strength training, followed by a 5–8 mile run. Two days out of the week she would ruck for about 6 miles carrying 45–60 pounds. On the last training day of the week she would complete a longer ruck of 10–12 miles and would focus on changing elevations. 1LT Lilly also took time to go to the Arms Room in the Glen Jean Armory to practice the proper assembling and disassembling of weapons and radios – repeatedly watching tutorial videos to ensure she got it right. On the tactical level, she tirelessly studied the Ranger School 20 Boards, which spell out what is expected of a Ranger patrol.

She kept a close eye on the progress of those in the program and found herself excited for the women who made it through.

“When two women finally made it through, they were in their mid-20s and I thought, ‘that’s awesome that these younger women are doing this,’ but I didn’t know if physically I could do it,” 1LT Lilly commented.

It wasn’t until 1LT Lilly saw a graduate with attributes that resembled her own that she could fully picture herself succeeding in the program.

“I heard about this 37-year-old major who had two children and who was still in there fighting through and getting re-cycled,” said 1LT Lilly. “When she graduated I said, ‘you know what – maybe I can do this too.’”

After three years of training, 1LT Lilly entered Ranger School at 38 years old. In 2017, Ranger School had a 67 percent failure rate among its participants, but that did not intimidate 1LT Lilly who said she felt prepared and capable when finally entering Ranger School.

“I won’t say that I thought I’d make it through, but I thought I had just as much a shot as anyone who was prepared going into the course,” she said. “A lot of schools get built up as being incredibly difficult – which they are – but a lot [of] times, if you break it down to one day at a time, it’s doable.”

Ranger School is renown as one of the toughest training courses a Soldier can experience. The 62-day course includes three phases: Benning, Mountain and Swamp, which focus on squad operations, platoon operations and advanced development of small unit tactics, respectively. Each phase tests a Soldier’s combat arms-related skills and pushes their limits – both physically and mentally. Ranger School was not without its challenges for 1LT Lilly, but she said overall she enjoyed the experience.

“Mountains was absolutely horrible for me. There were times when I thought I was going to die up on those mountains,” 1LT Lilly laughed. “But I used mental strength and willpower, and that got me through. Other than that, I honestly had a lot of fun doing certain parts of it. I loved the swamps. I would do the swamps all year.”

1LT Lilly emphasized the importance of mental stamina in succeeding in the grueling Ranger course. While she previously had been apprehensive about her age, she learned that her 38 years of life experience proved to be an asset.

1LT Lilly noted, “I’ve been through tough things [in life]. I’ve been through being fired from a job. I know that life goes on and you can bounce back from difficult situations. The things that they do to try to mentally mess with you didn’t faze me. I just said, ‘I’m going to keep going until I graduate or they tell me that I’m not welcome here anymore.’”

After five demanding months, 1LT Lilly graduated from the program and earned the coveted Ranger tab on April 27, 2018.

While she is the first female National Guard Soldier to graduate from the Ranger School, 1LT Lilly said she is humbled to be an addition to a list of strong women from all branches of military service who have also accomplished the feat.

“I know almost all of the women who are Ranger tabbed, so I’m just another woman who was able to successfully make it through,” she reflected. “[Like them,] I learned that I’m capable of a lot more than I ever thought possible. If someone told me that I was going to carry 100 pounds over a mountain, I would have said, ‘no way!’ But I did it. And I survived to live to tell about it.”

After the years of training and mental endurance it took to accomplish her goal, 1LT Lilly encourages others to strive to achieve their goals, no matter how difficult they may appear.

“It’s only impossible if you think it is,” said 1LT Lilly. “If a goal or a dream is important to you – whether it’s Ranger School, commissioning or [making a] 300 on the APFT – whatever it is, it’s just a matter of how serious you are going to be about your training and you have to be committed to that preparation.”

1LT Lilly has become a trailblazer in a rewarding career. She has achieved her goal not only of completing Ranger School, but more importantly, of being part of a profession that would make her children proud.

“My kids motivate me,” 1LT Lilly said. “I’m motivated by wanting to create a better world for them. I want them to grow up feeling like they can achieve anything. I want them to see that no dream is too big and that hard work will take them to where they want to go.”

END_OF_DOCUMENT_TOKEN_TO_BE_REPLACED

END_OF_DOCUMENT_TOKEN_TO_BE_REPLACED
The Next Evolution of the Army National Guard
CitizenSoldier October 4, 2018
Features

The Next Evolution of the Army National Guard

Today’s global environment is increasingly complex. Modern battles take place not just on land and in air, but also in space and...