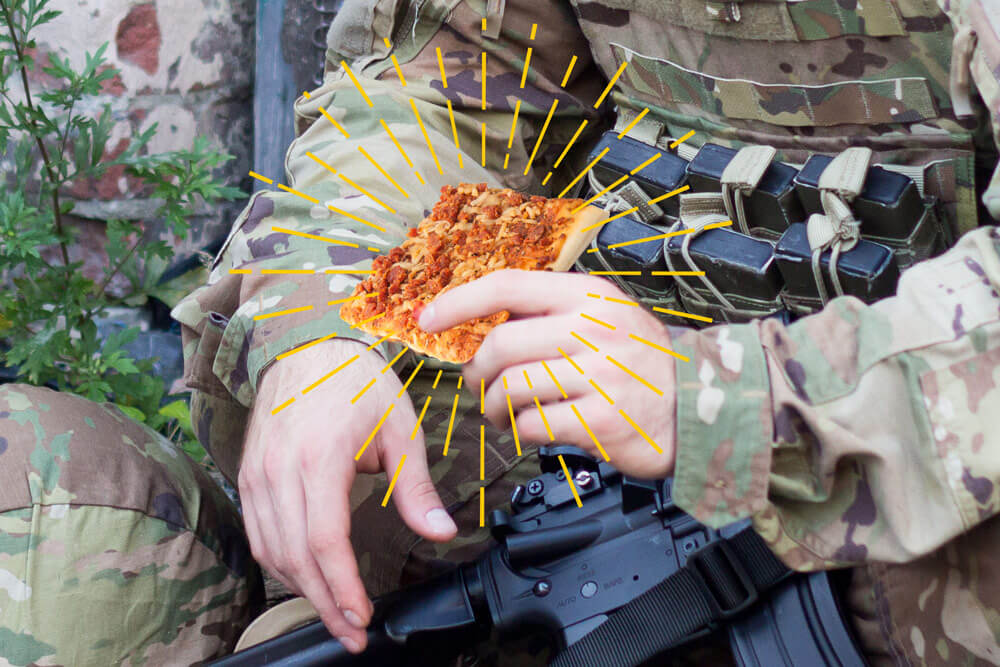 A long-awaited pizza MRE addition to the field ration menu is finally on its way!

Since the MRE version of combat meals first entered the field in 1983, Soldiers have longed for a way to satisfy their pizza cravings while in the field. However, creating the perfect slice that could meet standard MRE requirements stumped researchers and scientists for years.

“Pizza is the holy grail of MREs because for decades [Soldiers] have been asking for this,” Program Integrator at the DoD Combat Feeding Directorate (CFD), Paul DellaRocca told Stars and Stripes in February of this year.

The CFD, located at the U.S. Army Natick Soldier Research, Development and Engineering Center (NSRDEC), develops everything troops eat or cook in the field. They are dedicated to researching and testing the food processing and packaging technology that goes into producing MREs – making them the primary investigators behind finding the right formula to develop the pizza MRE.

The ongoing problem with crafting the pizza MRE was keeping the ingredients together in one package for the standard three years at 80 degrees without spoilage. A quick fix would have been to add chemicals and additional preservatives. However, researchers wanted to develop the pizza using natural alternatives to ensure a fresh pizza-like taste.

“We had to look at formulations that maintain texture, flavor, appearance and odor, so that after three years, when [Soldiers] open it up, it has the same qualities as it did on Day 1,” DellaRocca said.

Three large-scale tests were conducted at two different food processing plants to confirm the pizza was producible. To simulate a three-year time span, the pizza MRE was placed in a 100-degree box for six months.

However, once it was clear that a viable formula for the pizza MRE had finally been achieved, and that Soldiers would soon have their hands on the long-awaited meal, a setback arose.

When the pizza went into mass production in March of last year, manufacturers noticed something odd. The pizza’s tomato sauce had turned brown. After close inspection, they found that while the sauce was still nutritionally sound, oxidation was causing the color to change. Since no one wants to eat brown pizza, production was put on an indefinite delay until a remedy was found. But have no fear, pizza connoisseurs! After tweaking the recipe with rosemary extract, which prevents the sauce from losing its red color, the pizza MRE is back in production and slated to be fielded in 2019.

“Because the pizza is so widely requested, we tried to accelerate the timeline,” said Julie Smith, a senior food technologist at the CFD. “People got excited about it, but in the end, we wanted to make sure we got it right.”

The initial release of the pizza MRE will only feature pepperoni as a topping, though it is expected that a variety of topping options will become available after CFD conducts a round of user feedback evaluations with Soldiers.

As far as taste goes, the new MRE has been given a thumbs-up by those who have been lucky enough to try a slice.

With the pizza MRE on its way to the field, predictions are that it will also deliver a morale boost for Soldiers.

COL Bill Bigelow, Army Materiel Command director of public and congressional affairs, commented that, “When [you are deployed] and you get something to look forward to like a slice of pizza after you’ve been out all day on patrol … it’s a taste of home.”