CPT King is currently a member of Bravo Company, 2nd Battalion, 151st Aviation Regiment, Florida Army National Guard. He is an Army aviator who flies the UH-72 Lakota helicopter—perhaps a karmic assignment given that CPT King is also a member of the Oglala Lakota Native American tribe.

CPT King joined the Army National Guard in 2007, after seeing the many benefits his college roommate gained from membership in the Guard.

“I noticed in him a lot of discipline and good character, so his example was something I wanted for myself,” said CPT King. “I told him I was going to have a hard time paying for college using student loans and he asked me, ‘Have you considered joining the National Guard? They could help pay for your education.’”

CPT King’s roommate then accompanied him to an Army National Guard recruiting office to discuss his options. 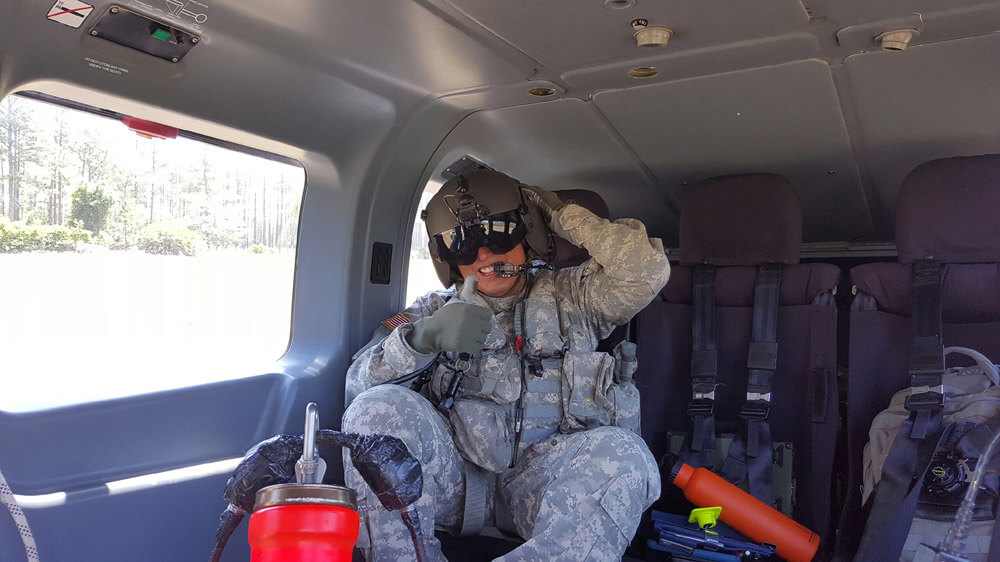 “By the end of that day, I had decided to enlist in the Army National Guard and it’s been the best decision of my life so far,” CPT King said. “I always knew I was searching for something, but I couldn’t put it into words. When I went to basic training, for the first time in my life, I had drill sergeants who said, ‘We don’t expect you to be good, we expect you to exceed even your own expectations and be great. You are going to serve your country and defend the defenseless.’ To have someone seriously expect that from me changed my life.”

After joining the Guard, CPT King earned his bachelor’s and master’s degrees and also graduated from flight school. He said flying had always appealed to him, but it wasn’t something that seemed realistically attainable.

“I always wanted to fly,” CPT King explained. “It was one of those things where I thought ‘that’d be really nice,’ but I never thought of it as a serious opportunity.”

It wasn’t until he heard about the inclusion of a specific helicopter that CPT King became especially driven to become an aviation officer.

“It wasn’t until I heard that the Army had [added] the UH-72 Lakota helicopter [to its fleet] that I really got motivated to pursue flight school as a real opportunity because I’m a member of the Lakota tribe,” he said.

When a seat for flight school opened up, CPT King’s commander and officer strength manager encouraged him to pursue the opportunity. He went before the flight school selection board and, when asked if he wanted to share anything not covered in the interview, CPT King made sure to mention his passion for flying the Lakota helicopter as a Lakota tribe member.

For CPT King, flying the Lakota helicopter for the Guard as a Lakota tribe member is symbolic of the connections between his two cultures. 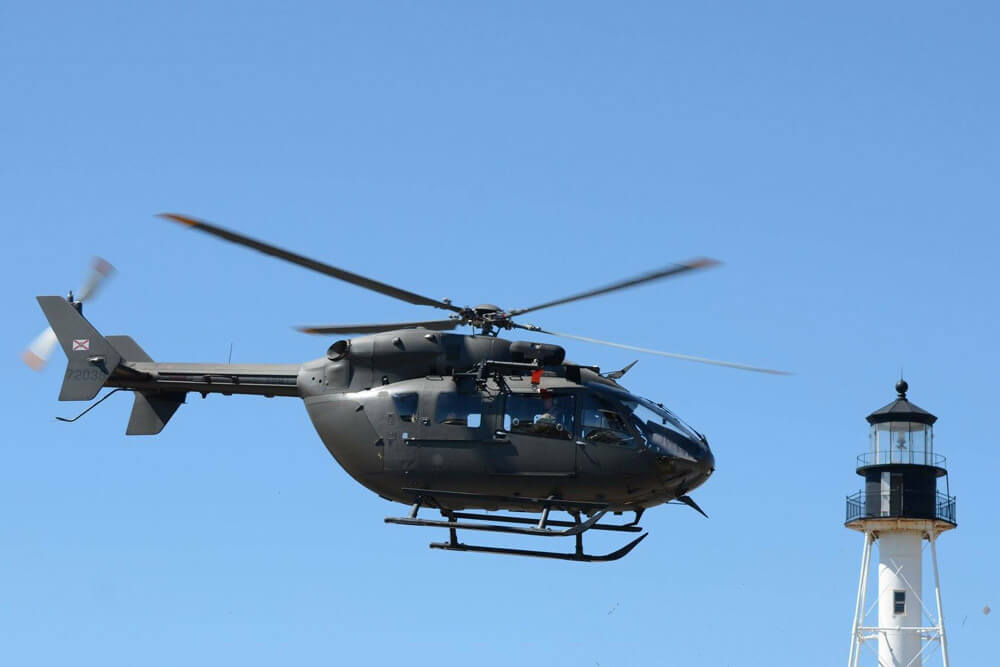 CPT King has also experienced instances where Guard and Lakota cultures have intersected with other Guard Soldiers contributing to Native American reservations. CPT King was originally a member of the South Dakota Army National Guard before undergoing an interstate transfer to the Florida Army National Guard in 2014. Golden Coyote, an exercise hosted by the South Dakota National Guard, includes a timber haul that directly benefits the reservation on which CPT King grew up.

“The National Guard has done a lot of work and held missions directly assisting Pine Ridge Indian Reservation where I’m registered,” explained CPT King. “Golden Coyote is an annual event where States come from all over the U.S. to do a variety of missions. They’ve done construction projects and timber hauls where they [deliver] cut trees that are used for firewood in the winter to the reservation.”

Now as a member of the Florida Army National Guard, CPT King has flown the Lakota helicopter to respond to the host of hurricanes that have hit the State since his transfer, including Hurricanes Matthew, Irma and Michael. He said that his proudest moment of service in the Guard thus far came from his response to Hurricane Irma in 2017.

While responding to the hurricane, CPT King landed a Lakota helicopter on Summerland Key, which was completely shut off from the mainland at the time.

“They had no water or electricity,” CPT King said. “The roads had been shut down and no one could go in or out. Boats couldn’t even get there because of the debris in the canals and waterways.”

CPT King and his fellow Soldiers were able to land and unload cases of water for the trapped residents. One resident, in particular, struck a chord with CPT King.

“There was a young man about my age who came up to get some water,” CPT King said. “He looked dirty and had some white around his lips like he was dehydrated and probably hadn’t had clean water in days. As I’m handing him the case of water he said ‘Thank you. There’s people on the other side of the Key that are in worse shape than we are—can you bring more water for them?’ And I assured him that we would bring them water.

“You could see the appreciation on his face, which meant more to me than any awards or recognition,” he continued. “I could see the person I was helping. And there were no cameras or reporters. No one else saw that interaction except for me and him. I knew that I was positively impacting his life and that meant a lot to me.”

The encounter exemplified what CPT King said is what he loves most about being a Soldier in the Army National Guard.

“My favorite aspect by far is being able to reach people that no one else can reach,” he explained. “It’s having that long reach of assistance and going out to people to not only help them and give supplies, but to let them know that they’re not alone.”

CPT King went on to note the significance of the connections he sees between his service as a pilot in the Guard and the values of his tribe.

“I look at the societies, the behaviors, the things that are valued by my tribe, and the qualities that are valued by the National Guard, and they may call them different things, but they are almost identical,” CPT King said. “The Army and my tribe share values of honesty, integrity, courage and selfless service.”

CPT King said he is thankful to be part of two similar warrior societies with supportive members and important values.

“I feel like if we were back in the old days with my tribe, a lot of my fellow National Guard Soldiers would be considered Lakota because they are warriors,” he commented. “What made someone Lakota was more of what they had in their mind and in their heart. A lot of people in my unit are as much Lakota as I am.”

“I wouldn’t be here if it wasn’t for the instructor pilots who taught me how to fly, the crew chiefs that make sure my helicopter is safe for me to fly every day and the other pilots who sit in the seat with me and put their lives on the line as much as mine is,” he continued. “They’re courageous and they have that warrior’s heart. They serve their communities just as much as I do. I feel incredibly honored to be a part of both the National Guard and Lakota cultures.”

END_OF_DOCUMENT_TOKEN_TO_BE_REPLACED 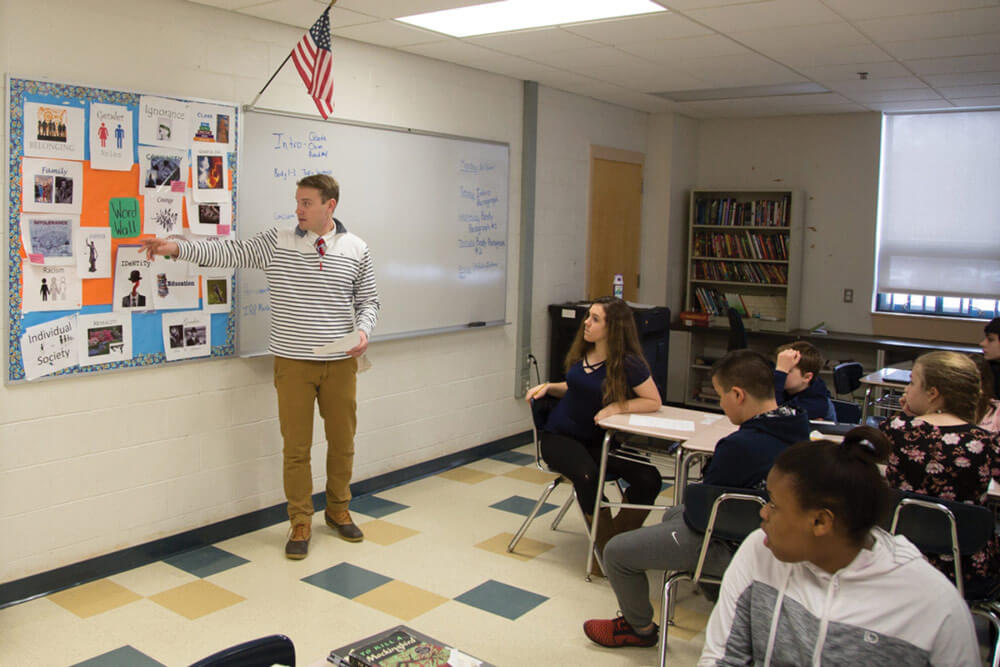 A Soldier and a Teacher

Standing in front of a classroom filled with roughly two dozen eighth-grade students, a man teaches a lesson on how to form an argumentative...