In early May, those same partners, comprised of personnel ranging from Duval to Palm Beach Counties, came together for a Search and Rescue Exercise (SAREX) to fine-tune response efforts for the next large-scale disaster.

“Any time you get with first responders, folks that we are going to respond with like we’ve done in Hurricanes Hermine, Irma, Michael – that’s value added,” said COL Michael Ladd, J2/J3 director of Military Support. “We’re getting best practices from everything they’re doing. Not only are we teaching and learning, but these are the response partners that have asked for our support to kind of round out their teams and round out their capabilities.”

After completing a swim test Tuesday morning, the Soldiers and Airmen of CERFP joined their civilian counterparts on their respective teams and traveled to Camp Blanding Joint Training Center to complete an extensive area search, structure collapse and maritime rescue. 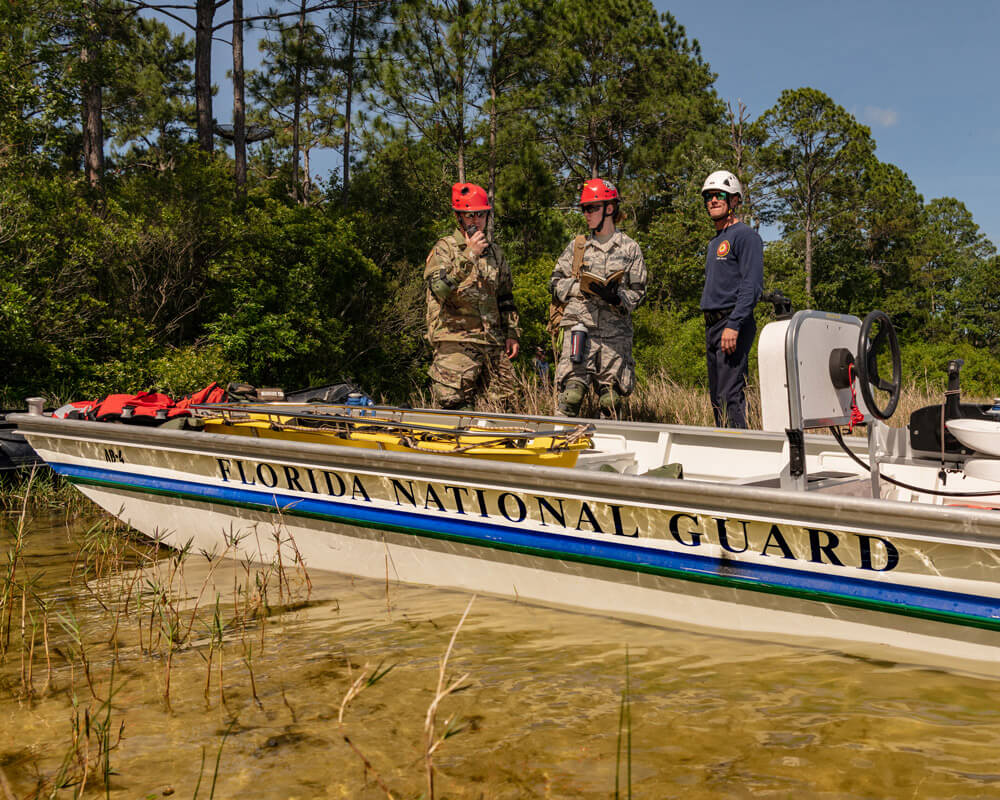 In recent years, the SAREX has essentially become an annual exercise that factors in lessons learned from real-world missions during hurricane season. The first year, CERFP realized aviation assets were needed to perform reconnaissance of devastated areas immediately, in order to ensure the teams reach the most critical locations first.

Hurricane Irma was the first time those critical tools were put in place, and SFC Chuck Morrow, CERFP noncommissioned officer in charge (NCOIC), says once the helos arrived, what would have taken three days with CERFP’s land and amphibious vessels took merely three hours.

For the next SAREX, they decided to test prepositioning the aircraft instead of just calling in support from their base of operations. The success of this planning was demonstrated with how quickly help arrived during Hurricane Michael.

“By prepositioning the helicopter assets in Tallahassee when we knew it was going to hit Panama City, as soon as the wind died down enough for us to get into the birds and do reconnaissance, we were able to do that,” said SFC Morrow. “We were able to put the assets where they needed to be on the ground in Mexico Beach, Panama City, no matter what.”

Last year’s catastrophic Hurricane Michael also helped to identify yet another piece of the puzzle. After the category 5 storm ripped through parts of the Panhandle, communications broke down for nearly every agency. Even with tactical radios, CERFP and their partners had trouble relaying information as fast as possible back to State leadership. Without the updates coming in from ground zero, additional assets standing by at the ready did not know where to go or how to get there, which is why communications is an overarching theme of this year’s SAREX.

For this event, communications teams are integrating with CERFP and, come hurricane season, this fine-tuned asset will be ready to better support the citizens of Florida.

“The Florida National Guard [FLNG] has taken great strides in having the ability to come to your aid as soon as possible and get you and your family out of harm’s way, as quickly as possible,” said SFC Morrow. “We have just as much, if not more, capabilities than our first responders to tell the State of Florida, ‘sit tight, we’re coming quickly.’ Much more so than any other State.”

SFC Morrow has been a part of this program since it was created in 2004 when Florida was one of 10 States tasked with creating this capability from scratch. Today, 17 CERFPs are spread across the Nation, and SFC Morrow believes Florida’s is still the best, as he prepares to pass its reins onto the next NCOIC. He counts the growth of the CERFP as one of his proudest contributions to the FLNG.

END_OF_DOCUMENT_TOKEN_TO_BE_REPLACED

END_OF_DOCUMENT_TOKEN_TO_BE_REPLACED
Texas and Chile Celebrate 10 Years of Partnership
CitizenSoldier June 26, 2019
On Your Radar

It is a well-known fact the National Guard’s core mission includes fighting America’s wars and securing the homeland, but perhaps a lesser known mission is that of building enduring partnerships.