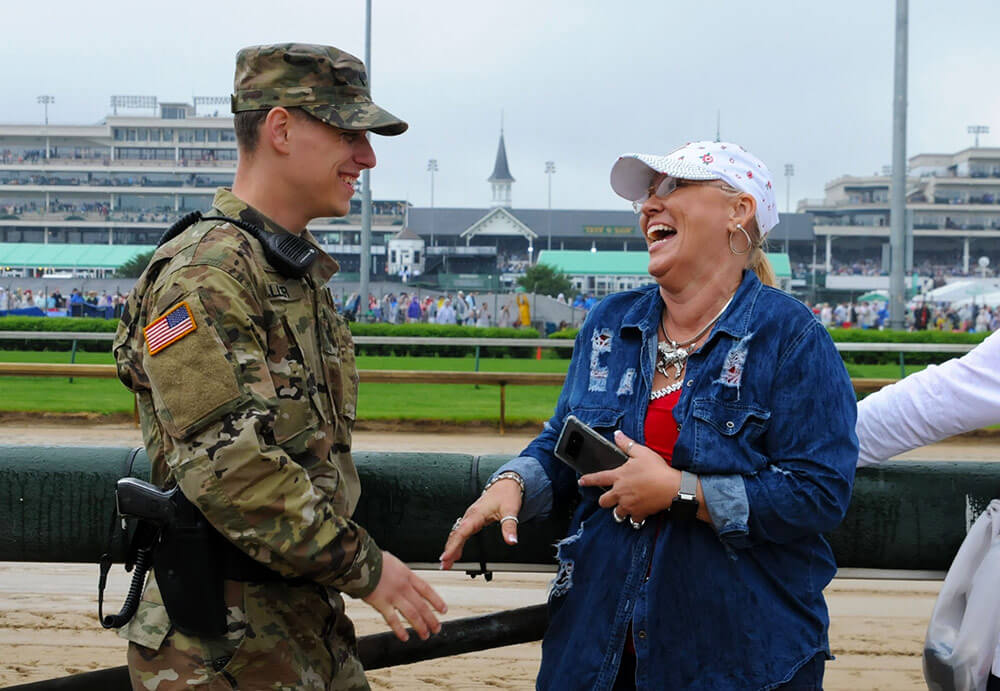 Roughly 200 MPs of the 198th augmented the Louisville Metro Police Department (LMPD) and Churchill Downs in providing security, directing traffic and maintaining crowd control for the race – called “the most exciting two minutes in sports.”

Because of the enormous crowd and high-profile nature of the event, the Derby necessitates additional trained personnel to help law enforcement.

“Without the National Guard here, we simply couldn’t do our job,” said Matthew Meagher, a lieutenant with the LMPD. “There’s no way we could secure this facility without having them here to help us.

“We use the National Guard to augment security for our entire backside of the Downs. The challenge is covering all the gates and gaps and keeping up with all the vehicular traffic, pedestrian traffic. And there are just so many people that you can have all kinds of issues.”

The National Guard is adept at assisting in missions like this. Building relationships with local entities develops trust and a bond that is key at this event and in other scenarios.

“We’ve got a healthy relationship with the LMPD, and we are here for them when they need us,” said 2LT Jonathan Sturdivant, security officer in charge. “As National Guard members, we are here to build rapport with the local populace and to make sure they stay safe for this event.”

Law enforcement officials face many challenges in dealing with a crowd of this size. Support from the National Guard helps make the event go according to plan.

“The biggest challenge has been dealing with the pedestrians in traffic,” said 2LT Angel Pagan, traffic officer in charge. “Everyone wants to get where they are going right now rather than follow directions from the signs and law enforcement. So far, though, everything has been running smoothly getting the civilians into the track and, hopefully, later tonight getting them out as safely as possible.”

2LT Sturdivant said, “It’s a great feeling for me to assist with Derby. When I found out I was going to be working the biggest horse race in the world, I got really excited because it’s a big deal.”

As the rain continued to fall and everyone became more rain-soaked, the attitude of the National Guard Soldiers stood out to Meagher.

“We’re all here in the elements and standing for long periods of time today, and not one time did I hear the Soldiers complain about anything,” Meagher said. “They seemed generally happy to be here to help out.”

The National Guard has provided support at the Derby 112 times out of the 144 years Churchill Downs has hosted the event.