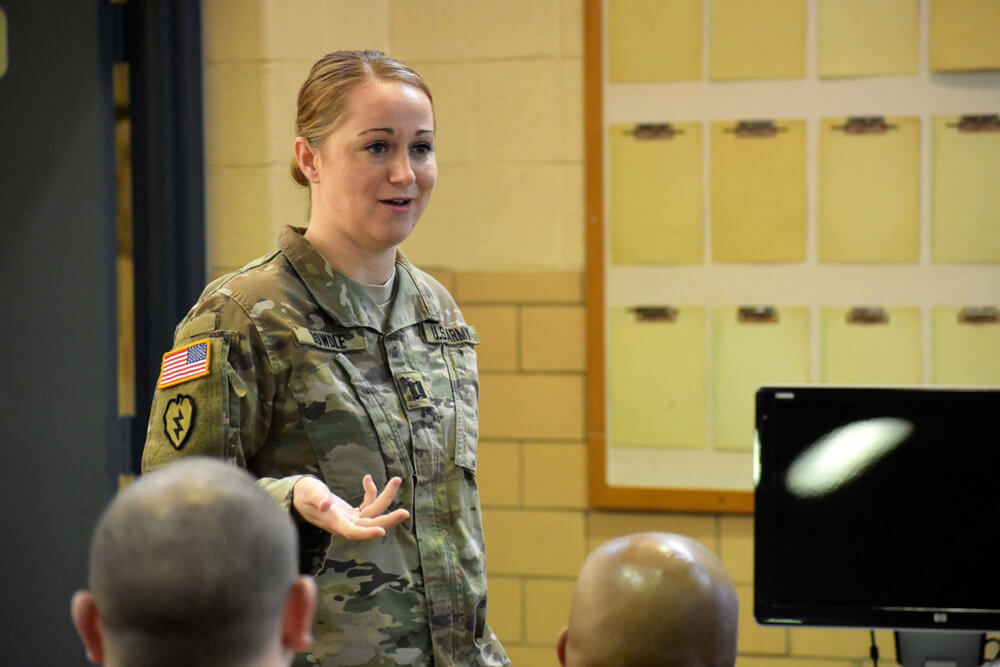 Dozens of interested military members and civilians attended the 110th Information and Cyber Operations Symposium to learn from presentations led by unit members and guest speakers.

The symposium provided an optimal opportunity for Maryland experts who serve in these technical fields to share information and build relationships.

CSM Thomas B. Beyard, the Maryland National Guard’s senior enlisted leader, addressed the audience with his firsthand knowledge of the invaluable capabilities the 110th IO Battalion brings to the Army.

“There’s no [Maryland Guard] unit that’s deployed more times, more places than the 110th,” CSM Beyard said. “We do a lot of things to support the warfighter all over the world, but sometimes we have to use those same capabilities to support the state of Maryland and our homeland as well.”

MAJ John Rodriguez, an experienced IO officer who was one of the presenters, touched on the unification of information-related capabilities in a multi-domain battlefield environment, as demonstrated in an exercise known as Cyber Blitz 2018.

He described how the exercise provided U.S. Army Cyber the opportunity to test new concepts, capabilities and techniques in offensive and defensive cyberspace operations, electronic warfare and IO.

“Be an advocate to break down stovepipes and fully integrating the various capabilities related to communication,” MAJ Rodriguez said.

“Conducting IO in one part of the world is very different than how you would apply it in other parts of the world,” he said.

Another presenter and fellow IO officer, CPT Lesley Dowdle, spoke about her experience serving as a member of the J39 in Maryland’s Vigilant Guard 2018 exercise last May.

“We got to integrate with the [Maryland Air Guard] 175th Cyber Operations Group and learned how to collectively apply both cyber and IO capabilities simultaneously,” CPT Dowdle said. “It took understanding joint doctrine and knowing what resources the Air Guard cyber could provide as well.”

CPT Dowdle said the general public’s typical impression of domestic operations is seeing National Guard members work with emergency managers in conducting rescues. But in this exercise, their expertise in IO was used differently as they worked with public affairs officers (PAO)s to help support the overall emergency situation.

“IO and cyber, along with PAO, were [utilized] while conducting key leader engagements as a means to effectively use our direct capabilities involving communications,” CPT Dowdle said.

In closing remarks, COL Julie M. Minde, 58th Expeditionary Military Intelligence Brigade (EMIB) commander, emphasized the need to continue building the IO and cyber capabilities through enduring partnerships in and out of the State of Maryland.

“I’m proud of this organization, its extensive experiences and its people,” COL Minde said. “I know we will move forward with great professionalism to make this battalion the role model unit for IO and cyber capabilities in the future.”

During federal missions at home and abroad, the 110th is subordinate to the 58th EMIB in Maryland and the Washington National Guard’s 56th Theater Information Operations Group.

END_OF_DOCUMENT_TOKEN_TO_BE_REPLACED

LTC John Hall saves a local citizen from drowning in the frigid waters of a local swimming hole at Pria Park, located in the Dolomite Mountains of northern Italy. U.S. Army photo by SPC Josselyn Fuentes

It was a beautiful June day in Contra Pria, Italy. Families enjoyed a picnic together, and the refreshing water served as a welcome refuge from the heat and humidity of the last weekend leading into...