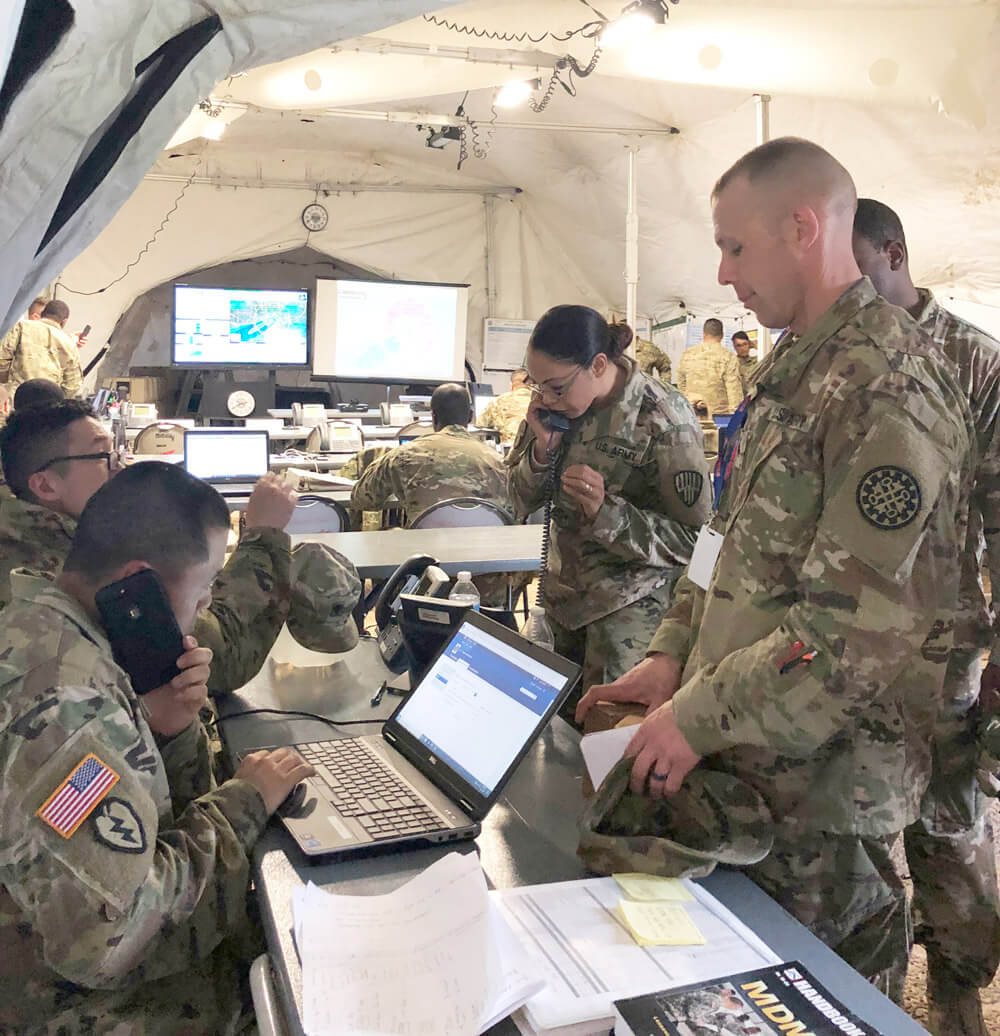 New York Army National Guard Soldiers from the 369th Sustainment Brigade, headquartered in Harlem, took part in the exercise, which simulated a nuclear attack on Detroit.

“We started training last year; we are learning a lot from our civilian counterparts and, as a strong team, we have worked on our individual tasks and collective staff work,” said COL Stephen Bousquet, the 369th Sustainment Brigade Commander.

The exercise scenario was built around an urban area hit by a 20-kiloton atomic weapon. One incident was followed by another during the exercise.

The 128 Soldiers from the 133rd Composite Supply Company, headquartered at Fort Hamilton, New York, were constantly on the go, moving critical supplies from one location to another, according to CPT Ismael Batista, the company commander.

“These truly are the epitome of disaster-ready Citizen-Soldiers,” said 1SG Tracyann Stewart, first sergeant of the 133rd Composite Supply Company.

“For a unit such as ours in Brooklyn, it can feel too close to think about such emergencies as these, which will test our resolve or will to help family, friends and neighbors,” she added.

The 369th will be responsible for their part in the mission for about two years, and during that time, will continue to improve interoperability between Guard, active and Reserve with civilian agencies for homeland response, specifically Chemical, Biological, Radiological and Nuclear incidents, according to COL Bousquet.

“This experience is different than our deployment in 2017. Then we were a brigade element supporting logistics in the Middle East; now we are working with different units assisting with vital urban search and rescue, and life-saving decontamination and medical care,” COL Bousquet said.

During the exercise, the Soldiers were continually performing command tasks, to include receiving reports, updating and assessing information and deploying simulated National Guard, State and federal forces to provide a scaled response to the disaster.

“No one is ever truly ready for a scenario where U.S. cities are attacked like this. Not every young Guardsman knows the danger of an experience such as deployment, CPT Batista said.

“This exercise can remind them of the risk and responsibility we hold within our communities,” CPT Batista added.

The team trains under Department of Defense guidelines, which require the Soldiers to respond within 6 to 12 hours to assist local authorities after a Chemical, Biological, Radiological or Nuclear attack or a hazardous materials incident, COL Bousquet explained.

“Every member of the 133rd can attest to hoping we’re never called up,” 1SG Stewart said. “But they are ready to do their jobs.”

“As we have geared up for this exercise over the past year, many Soldiers felt the strain of a higher op-tempo, but being here in person, running through the scenario, I think they are confident in their training,” 1SG Stewart said.

“I’m proud of how far this unit has come; leaders should rest assured that the 133rd remains vigilantly in place,” said CPT Batista.