Today’s global environment is increasingly complex. Modern battles take place not just on land and in air, but also in space and cyberspace. Adversaries are agile and have access to technologies that once gave U.S. forces critical advantages. To successfully ensure the safety of our Nation, the Army must be always engaged and ever vigilant. To meet this level of demand, the Army has increasingly relied on the National Guard component to play an integral role in combat. In response, the Army National Guard has transformed from a strategic reserve to a fully integrated operational force. Today, with reductions in size and budgets shrinking the capacity of the active duty component, the Army needs the specific capabilities of the Army National Guard more than ever.

Recently, LTG Timothy J. Kadavy, Director of the Army National Guard, introduced ARNG 4.0 – an initiative designed to prepare the National Guard to both meet the challenges of the 21st century and also partner with the Army in a larger and more continuous fashion.

“Our Nation faces different threats today than we did 100 years ago,” said LTG Kadavy. “Army Chief of Staff GEN Mark Milley asked a question while at a National Guard Association of the United States conference, ‘Do we have the right Army National Guard for the 21st century?’ I took his question very seriously.”

From a historical perspective, the Army National Guard has evolved significantly over the past 44 years. LTG Kadavy describes this evolution as ARNG 1.0, 2.0, 2.5 and 3.0, culminating with today’s era of ARNG 4.0.

In the early post-Vietnam War era of 1973, the Army adopted the Total Force Policy of Army Chief of Staff GEN Creighton W. Abrams, Jr. The Abrams Doctrine, as it was called, activated the 100 percent volunteer Army National Guard component only in the event of total war. This characterized
ARNG 1.0.

In 1984, at the height of the Cold War between the United States and Russia, the Reagan-era military buildup placed more emphasis on the Army National Guard.

It called for increased structure through tiered readiness, “One Army Standards,” and improved training. This was ARNG 2.0.

In 1992, following Operation Desert Storm, the Army Guard adjusted its readiness practices by introducing the round-out concept and identifying the role of First Army in post-mobilization preparation. This readiness adjustment was ARNG 2.5.

In 2001, after the Sept. 11 attacks, the Army National Guard quickly transformed into an operational reserve force, launching its longest sequence of mobilizations and deployments to that date. The Army Guard also experienced an increased role in homeland defense, a modernization of the force and the implementation of the Army Force Generation (ARFORGEN) model – the method for effectively generating trained and ready forces on a sustainable, rotational basis. This was ARNG 3.0.

We are constantly looking at ways to increase and maintain readiness in a band of excellent, so that if we have to execute upon ‘America’s worst night,’ we can defend and protect the Nation and defeat those who threaten us.”

That brings us to ARNG 4.0, the future of the Army National Guard. ARNG 4.0 is designed to change methods for training, manning and organizing units. The initiative is expected to enhance total readiness by focusing resources to provide a more rapid response in support of the Army.

“When great powers went to war in the late 1800s and early 1900s, war was declared on a particular day, but the fighting didn’t begin for a year,” said LTG Kadavy. “With today’s technology, as we saw on Sept. 11, 2001, you may not be at war at 0700, but by 1000 you are mobilizing to fight. This means the Army National Guard has to sustain higher levels of readiness in certain units to help the Nation respond quickly.”

ARNG 4.0 is designed to provide enhanced capabilities more quickly to the Army. Under ARNG 4.0, the Army Guard’s primary focus will move from high-intensity rotational deployments and, instead, hone in on more specialized deployments that send units with mission-specific skill sets. ARNG 4.0 also brings with it the Sustainable Readiness Model (SRM), which replaces ARFORGEN and lays out a four-year cycle of focused readiness for urgent units. Once fully implemented, according to LTG Kadavy, all units will have a higher level of readiness, with focused units displaying an extreme level of readiness.

The goal is to better prepare the units through rotations at the National Training Center (NTC) and the Joint Readiness Training Center (JRTC). The number of increased training days will vary depending on the unit. For example, in year three of the SRM, the armor brigade combat teams will have 64 to 66 total training days (in comparison to the traditional 39 days), while an infantry brigade combat team will have 54 total training days. The director said this is all designed to reduce post-mobilization training requirements.

Phase two will focus on increasing readiness of the remaining force. Other initiatives under ARNG 4.0 include reorganization of units to achieve higher efficiency, focused training standards (Objective-T), high-performing leader development, increased manning with the addition of 7,000 Soldiers and increased resources.

When asked if there were concerns that the higher demands and increased training days might have a negative impact on retention, LTG Kadavy said, “What we’ve found over the last 15 years is that mobilization, deployments and these key exercises enhance retention of our Soldiers and don’t hurt it. Our Soldiers are all about service and they want to train and serve to the highest level possible.” He went on to say, “We’ve been to the National Training Center three times and JRTC four times; we’ve not seen a dip [in retention]. We are working to provide more resources to support those who have to train. It’s a tremendous time to be part of the ARNG.”

According to LTG Kadavy, an additional benefit of increased resources is the expansion in the range of training and development options the Army National Guard can offer. “One way ARNG 4.0 improves our current capabilities is through increased opportunities for our Soldiers. Whether it’s deployments or overseas deployment training, whether it’s defending the skies over Washington D.C. or the electrons that fly through space as part of our Cyber Force, there are all kinds of professional development opportunities for our Soldiers in today’s ARNG.”

The Army Guard is also working to ensure the additional time Soldiers spend training is as productive as possible. An after-action review is held following each training event at the National Training Center or JRTC. The reviews are not discussions about how the brigades performed. Instead, they are reviews about how the ARNG, as an institution, performed in helping the brigade and the brigade commanders to be successful and efficient during their time at the training centers. At the reviews, brigade commanders have the opportunity to share lessons learned. This, in turn, allows the ARNG to improve the training strategy and the overall program.

Though ARNG 4.0 is driven by the need to effectively and efficiently support the needs of the Army’s active duty component, the director said the Army National Guard is no less committed to its dual mission to serve the Army as well as State governors. In fact, he noted that ARNG 4.0 serves to strengthen the force even as it carries out operations at home in the States.

“We are the combat reserve of the United States, and we work for our president and help our Army fight the Nation’s wars. But when we are not mobilized and deployed, we are back home in our States where we have the ability to utilize the enhanced readiness and the additional experience and training. It makes us the most capable we’ve ever been
to respond to the needs of governors and States in times of emergency,” said LTG Kadavy.

In a final statement about how the Army National Guard partners with Soldiers’ Families and their civilian employers, the director noted the Army Guard’s commitment to providing transparent and proactive communication. “The key thing I hear when I talk to our Soldiers, Families and [civilian] employers is, ‘We can make this work if you are predictable and you communicate with us. Let us know what’s going on and be predictable so we can plan our civilian lives.’ So, that’s our commitment to our ARNG Soldiers. We are going to be transparent and communicate. We are going to be as predictable as we can in a very unpredictable world.”

ARNG 4.0 will roll out fully in 2018. LTG Kadavy reminds Soldiers, “We are doing this because the country needs us to do this. Continue to serve and do great things for our ARNG, States and our Nation.” 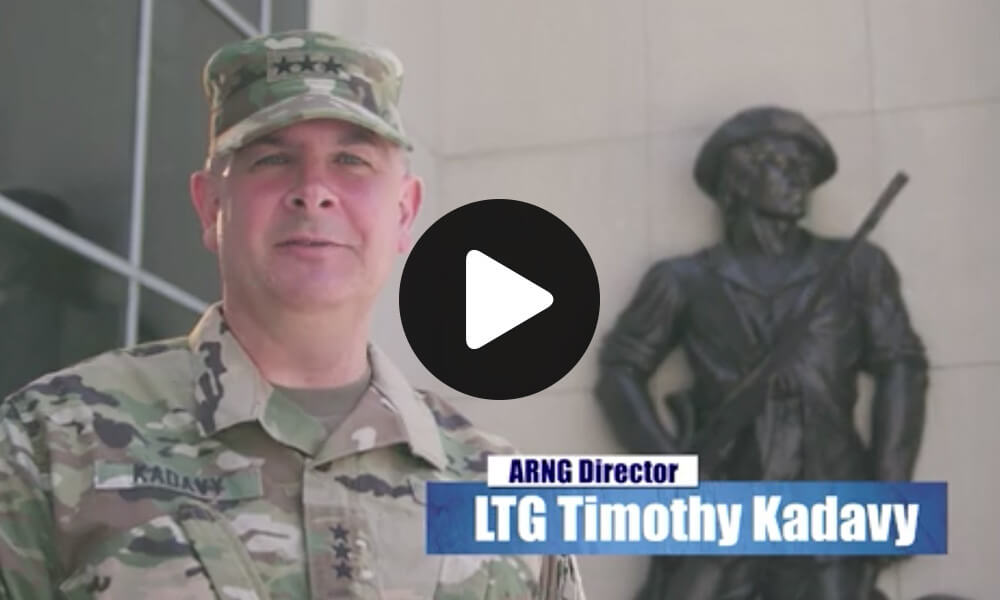