The tooth fairy was kept busy in Suriname this past April and she had the Army National Guard to thank for the extra work. The South Dakota Army National Guard has a State partnership with the small country of Suriname, which is on the northern coast of South America, and last spring nine of South Dakota’s personnel helped residents from the town of Albina by extracting over 400 unhealthy teeth and treating over 300 other various medical cases. 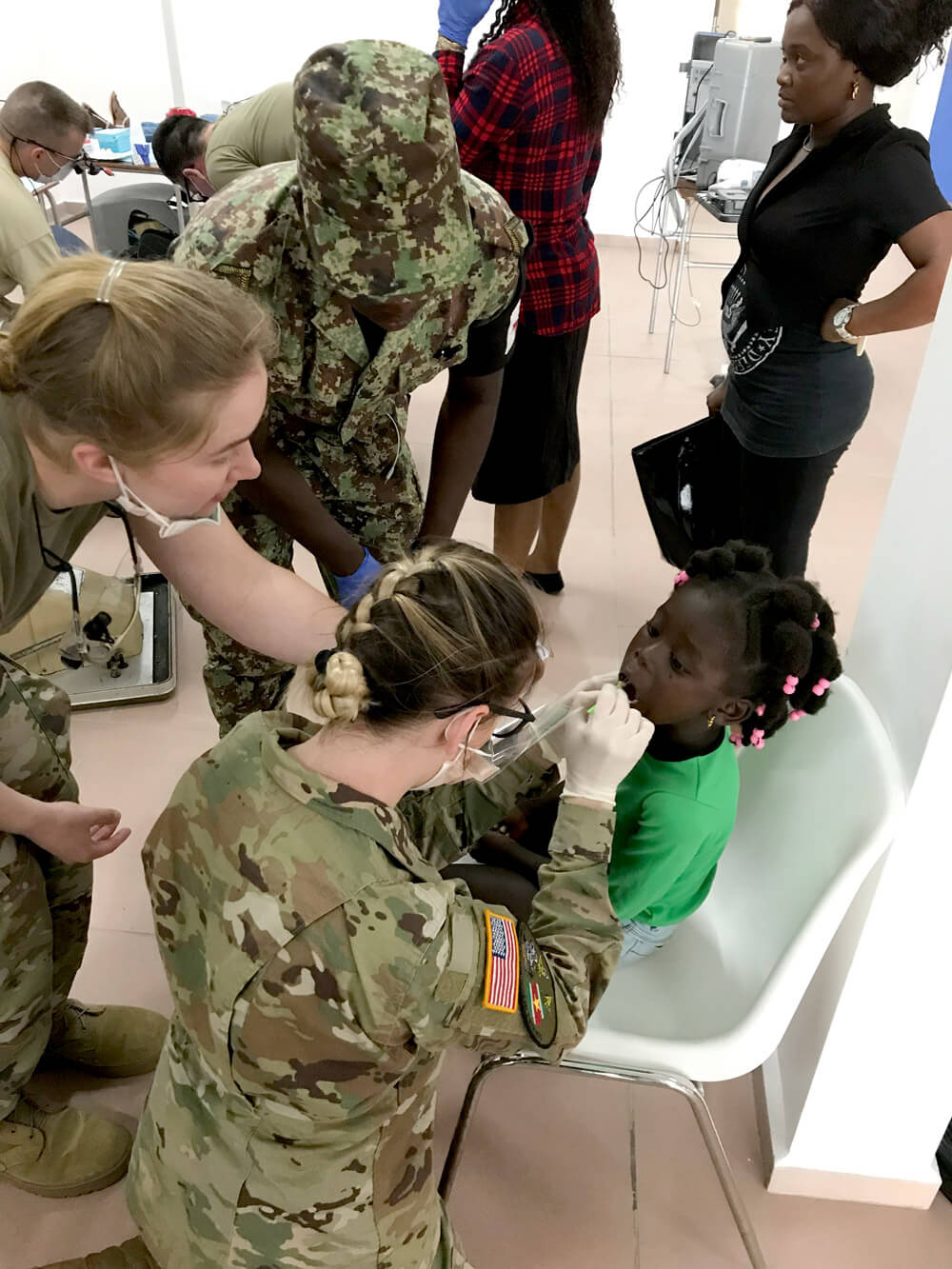 “Our overall goal was to collaborate with local providers and the Suriname Defense Force to help in the continued effort to improve the medical and dental health of the people of this region,” said COL Murray Thompson, a dentist and commander of the South Dakota Medical Command.

The dental care portion of the mission included the bulk of the work, though some notable medical cases were encountered as well. The nine Soldiers who attended included dentists, dental technicians, a physician, a physician’s assistant and other support staff—all from the South Dakota Army National Guard.

The mission was put under pressure from the start, but the Soldiers of South Dakota bore up well under the strain. Due to a blizzard in South Dakota, the initial plan to pack up was thrown off schedule, but the problem was mitigated and the challenge met.

“We brought a few dental instruments and two autoclaves [instrument sterilizers], but had not seen the equipment until we arrived in country as we had another blizzard that [caused our normal drill weekend to be rescheduled]. That had been when we were supposed to help pack the equipment and inventory supplies,” COL Thompson explained. “Due to the timing required for shipping, we had to have non-team members of the 730th ASMC [Area Support Medical Company] help us pack to the best of their knowledge based on our requests.”

The team knew they would be short on required instruments, so they arranged to have the local Suriname dental school loan them necessary equipment.  Once on the ground, they had one day to inventory, arrange, package, sterilize and obtain missing items.  The very next day, without ever having been to the location, they had one hour to set up equipment and begin patient care, COL Thompson said. 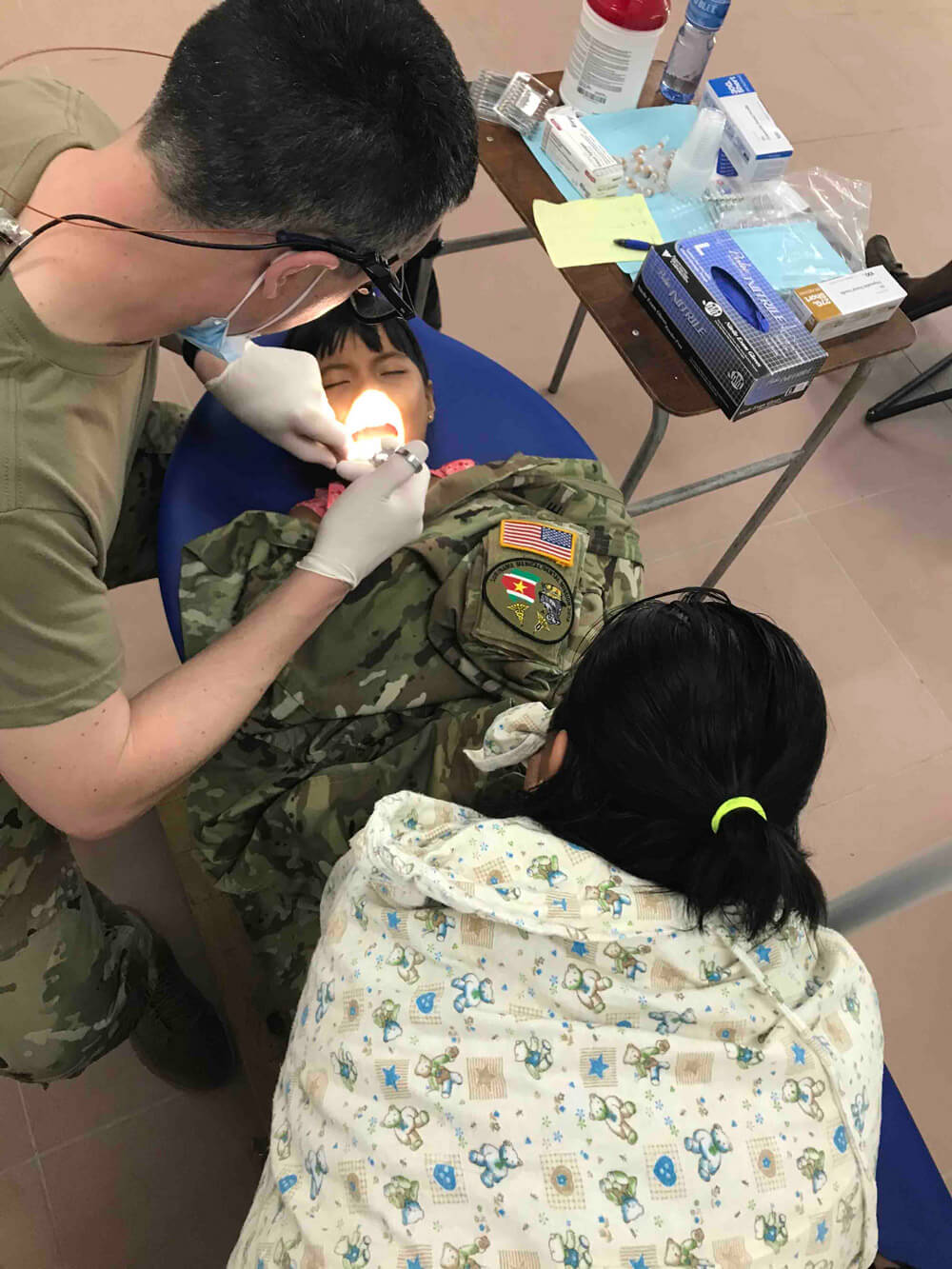 Considering that the mission came together in a very short amount of time, things went remarkably well. It was no doubt due to the level of commitment shown not only by the entire team but also the Suriname Civilians. COL Thompson went into further detail on the vital mission:

Dental equipment is very expensive and we relied on local cooperation and generosity,” he said. “Without the help of the local providers and dental school, we could not have helped as many patients as we did. We had to find and borrow local dental instruments, supplies and disposable gloves. Basically, everything we were doing had never been done before in that area. We did not even know exactly what the facility looked like until one hour before we began seeing patients. This was an excellent exercise in mission planning on the fly and execution of a mission with minimal supplies.

The South Dakota group went from the freezing temperatures of The Upper Midwest to the 85-degree humidity of Suriname without missing a beat. COL Thompson lauded his Soldiers for their performance. 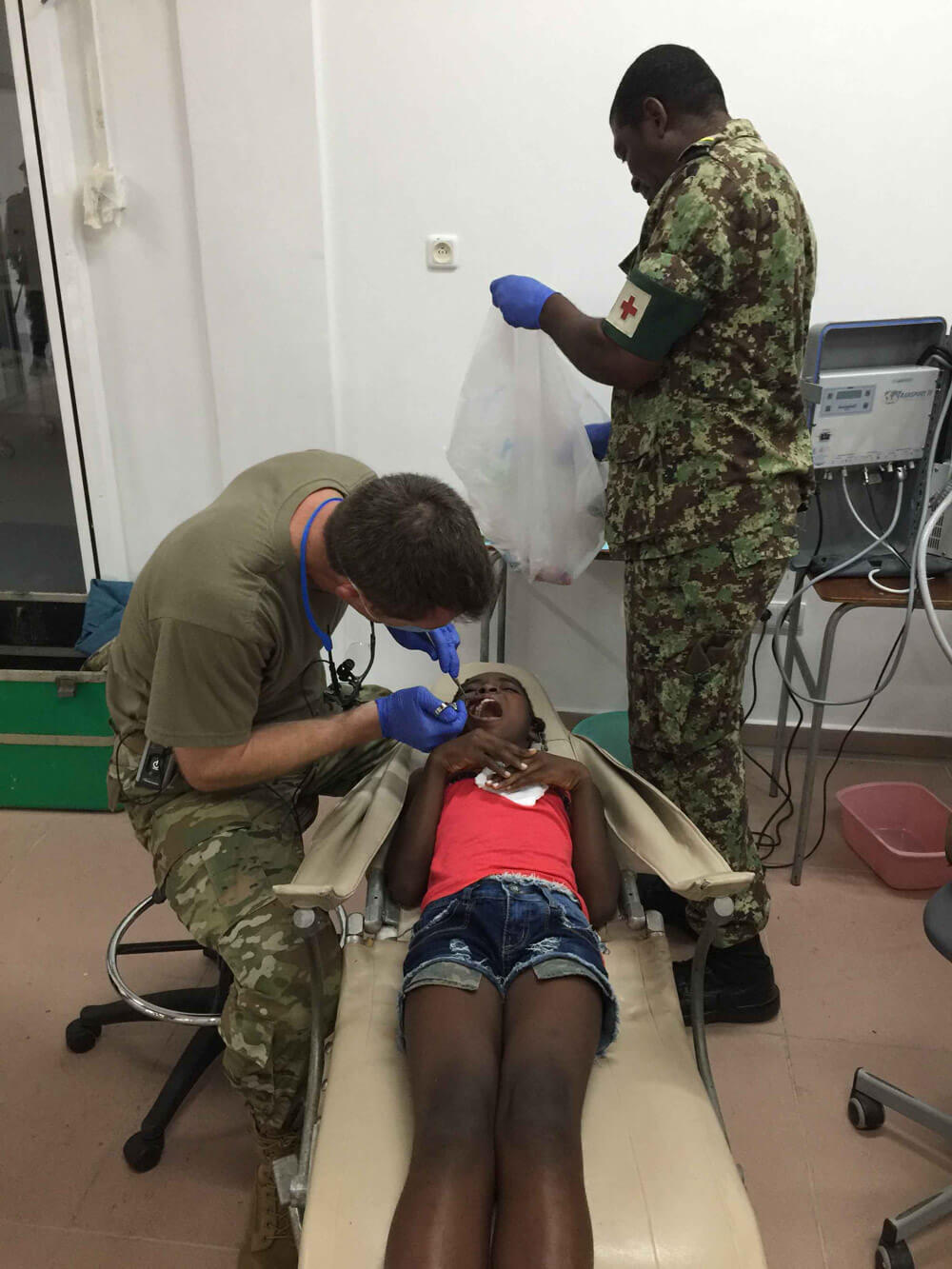 “It truly was a fantastic exercise in resilient mission planning,” he remarked.

One of those working with the dentists was SSG Samantha Wempe, a dental hygienist with the South Dakota Medical Command. She was unequivocal in her feelings on the mission. They seemed to reflect the same enthusiasm COL Thompson shared.

“My role was to assist the dentists with extractions, sterilize instruments, and maintain supplies and equipment,” she said. “[It was] very successful. We did extractions only, and we extracted permanent and primary teeth. Our group was amazing and worked together perfectly.”

She said this was her first time going overseas for the Guard and that there were some challenges, but nothing extreme. She did, however, fall in on the mission at the last minute, so that caused her to scramble a bit to prepare. 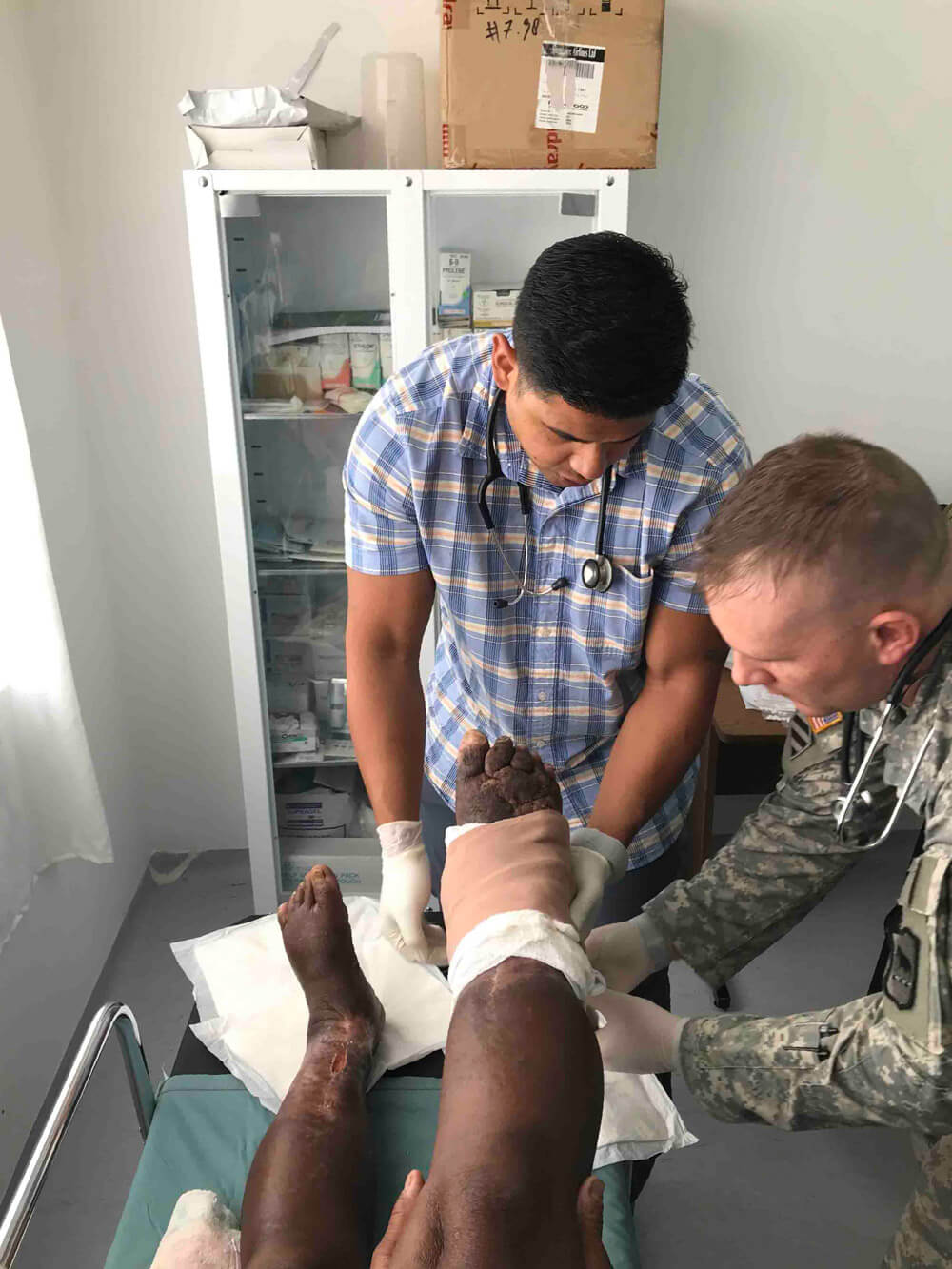 “Challenges were mainly environmental and operational—not enough gloves, etc.,” she noted. “I was a last-minute add-on because another dentist was unable to go, and he pushed them to take another assistant and specifically recommended me. I was offered and accepted, then worked like crazy to get the required training and paperwork done [in time].”

The medical portion of the mission seemed to be more routine with most patients asking for help with illnesses common to Suriname, like aches and pains in elderly citizens and worms in children. For MAJ Ronovan Ottenbacher, a field surgeon in the 730th ASMC and provider in Medical Command, one attribute turned out to be critical to carrying out the mission.

In MAJ Ottenbacher’s estimation, organization was the key ingredient to making the mission a success. Many of the details of the mission were not known until it was time to execute, and many aspects were last-minute tasks that needed to get done. To keep up with the quick-paced demand, equipment, supplies and personnel were organized as efficiently as possible. Some planning was done prior to the mission, some was done during the mission and the team coordinated with the Surinamese providers as much as they could. 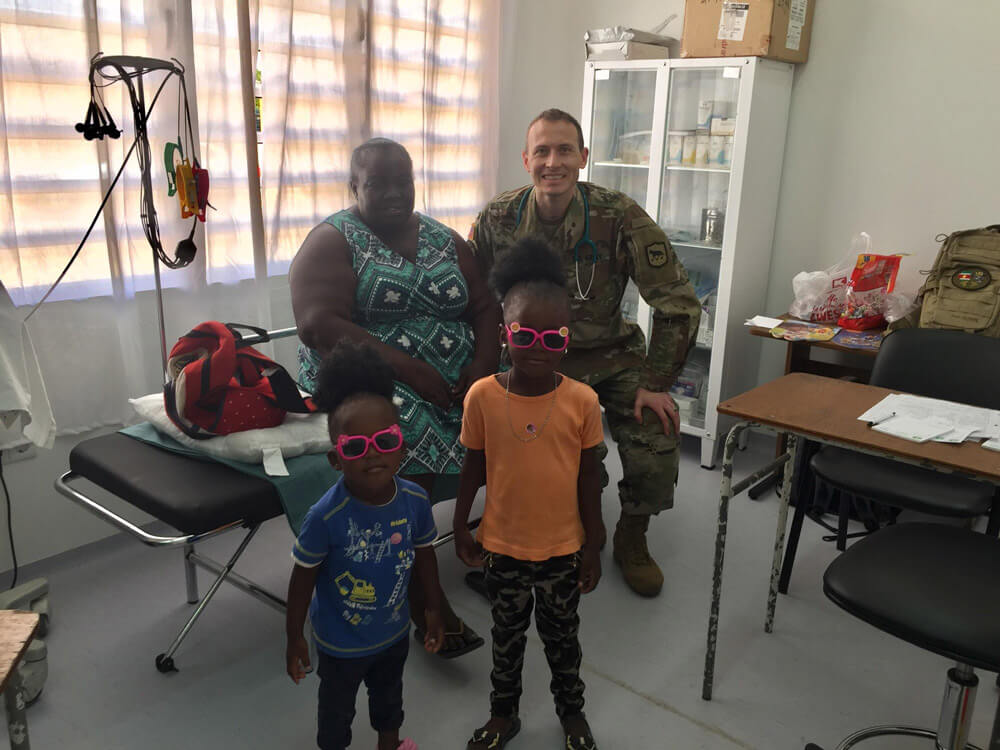 As the team began to see patients, it became very clear just how much the mission was needed. Hundreds of Surinamese came to them seeking help. Although most cases were routine, in the short time the South Dakota Soldiers were there, the medical team saw a few cases that were out of the norm.

“We saw a couple of more unique cases—some sicker people—a gentleman who very likely had lung cancer and a gentleman who had very severe leg swelling and open wounds on his leg. I think he actually had some maggots in there that we removed.” 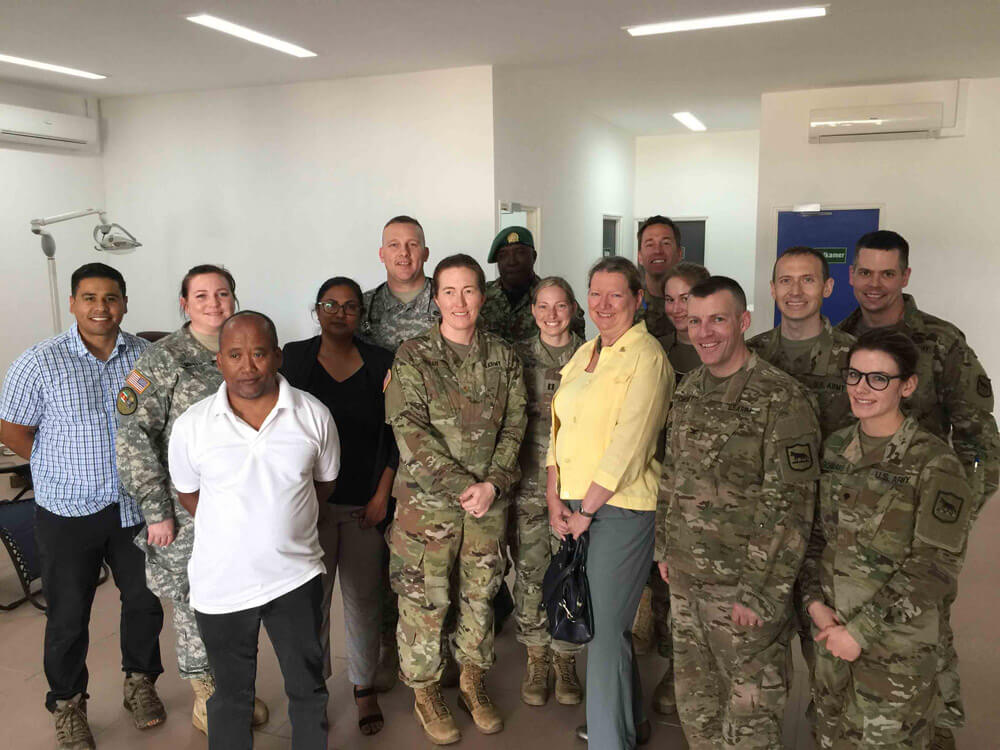 MAJ Ottenbacher indicated that before they left, the Guard team helped set up long-term plans for those patients who would need continuing care with the Suriname providers. For the National Guard services, there were no costs charged to the local residents who received medical care and medication.

The medical contingent of the team was able to see all those patients who sought their attention, while the dental providers saw almost all their patients, but at some point they had to end treatment due to time constraints with the mission.

Both the South Dakota Army National Guard team and their patients were fortunate in that they had a new medical facility in Albina in which to treat patients. Initially, some concern emerged as to whether the electrical systems in Suriname would be up to the task of running the needed equipment, but the facility turned out to be well set up for the work, MAJ Ottenbacher said.

“We had brand new, well-stocked exam rooms,” he recalled. “The dental area was wide open—almost like an emergency room area. They had [plenty of] room to set up their equipment. The facility was very nice. It had all the services and support for patient flow and our medical needs. It was excellent.”

The mission had a positive impact on the Soldiers as well as the patients. Two of the Guard providers went on to say that their experience in Suriname helped solidify their focus for their future dental career track. They both noted wanting to continue to help underserved populations and bring much needed dental care to the less fortunate.

“Together we relieved so many people of pain. It was life changing for me in my personal career,” said SSG Wempe. “I’m trying to apply to dental schools and this really solidified the type of dentist I want to be—I want to get people out of pain.”

“In 2016 during my first visit to the area, I was told that there was a huge need for medical and dental care,” said COL Thompson. “It’s fun to see how a recognized need and a constant desire to help humanity resulted in a full-blown medical and dental humanitarian mission three years later. Many people are now pain-free. We hope that this relationship with Suriname, the Suriname Defense Force and South Dakota will continue to grow. I look forward to future partnered medical and dental missions.”