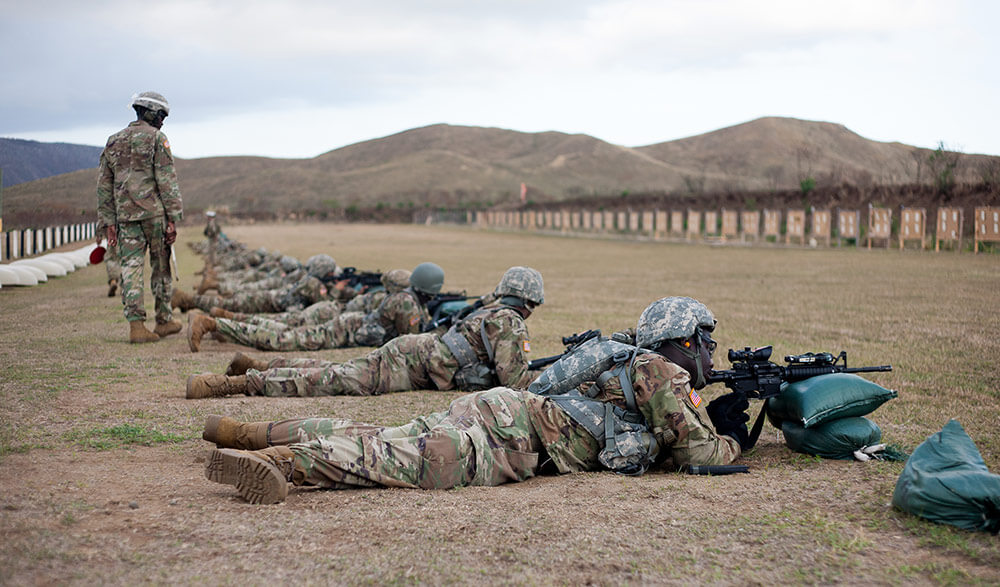 The Soldiers, who stayed in Puerto Rico for four days, were flown to the island by a pair of C-130 Hercules military transport aircraft operated by the New York Air National Guard’s 109th Airlift Wing from Stratton Air National Guard Base in Schenectady, New York.

Upon arriving in Puerto Rico, the Soldiers, who are based at the Lexington Avenue Armory in New York City, traveled to Camp Santiago and set to work honing their warfighting skills.

Camp Santiago, known as Campa­mento Santiago in Spanish, is the primary training site for the Puerto Rico National Guard. The camp has state-of-the-art ranges and other training areas. The camp is named after SPC Héctor Santiago Colón from Salinas, Puerto Rico, who received the Medal of Honor posthumously during the Vietnam War after shielding other Soldiers from a grenade explosion with his body.

“We started at first light and confirmed that the whole company’s rifles were zeroed,” said 1LT Matthew Canavan, one of the company’s platoon leaders. After the zeros were confirmed, the real training began, consisting of a reflexive fire shoot and a stress shoot.

For the reflexive fire, the Soldiers were tasked with identifying and engaging targets at ranges from 5 to 25 meters while stationary and then while turning and walking.

“For the reflexive fire, the Soldiers use facing movements and controlled shots. Instead of taking single shots, they are shooting, moving and communicating,” 1LT Canavan explained. “We kept the squads and the fire teams organic with everyone who will be present at annual training, and we had them moving as a team.”

The reflexive fire exercise, which reinforces the fundamentals of short-range marksmanship, was followed by the stress shoot, which is demanding both mentally and physically, 1LT Canavan said.

“The stress shoot involves getting a Soldier’s heart rate up as it would be in combat,” 1LT Canavan continued. “We took each squad and had them run a quarter mile and then had them conduct push-ups, flutter kicks and burpees so we could tire out their muscles.”

Once the Soldiers were tired and fatigued, the shooting began. “We took them onto the range and started giving them commands from the tower,” 1LT Canavan said. “So not only are they fatigued, now they need to pay attention to commands.”

During the stress shoot, the Soldiers engaged a variety of targets in quick succession from the standing, kneeling and prone positions.

“It’s designed to mimic the stress of combat,” 1LT Canavan explained. “It boils down to what will happen in a fight. They need to listen to the team leader.”

Traveling over 1,600 miles to a different climate and working in an unfamiliar training environment wasn’t without its challenges, and Alpha Company worked tirelessly to make sure all the moving pieces fit together.

Even though the training conducted could have been accomplished closer to home, there were many benefits for both the unit and the Soldiers to training at Camp Santiago.

“Soldiers going to Fort Drum day in and day out doing the same exercises – it kills retention,” 1LT Canavan said. “A second benefit is getting Soldiers used to a different type of climate.”

Soldiers from the 1st Battalion, 69th Infantry, have deployed to both Iraq and Afghanistan since Sept. 11, 2001.