It’s common for Guard soldiers to start in one unit and stay there for most of their career. This uniqueness brings a plethora of opportunities for connections to be made on the civilian side. Need an electrician? There’s probably one in your unit. Need someone in information technology? Look among your ranks. Need a news station helicopter pilot? You can find three at the Oklahoma Army National Guard’s aviation facility in Tulsa, Okla.

One of the many unique characteristics of being in the Army National Guard is the civilian role. Most Guard Soldiers drill one weekend per month, conduct a two-week annual training and sometimes deploy overseas. Unlike active duty, Guard Soldiers usually hold two roles: civilian and service member.

“There are a lot of things the Army has given me that make me better in my civilian career than I would’ve been,” CW4 Kavanagh said. “The discipline to stay to standard and not deviate from what we know is best practice in aviation, [that came from my military training].”

Though CW3 Jon Welsh, CW4 Will Kavanagh and CW4 Chase Rutledge compete on the civilian side, they are teammates in the Guard and serve in the same unit: Detachment 1, Charlie Company, 3rd Battalion, 140th Security and Support Aviation Regiment.

“We flew in Iraq together and now we’re flying in Oklahoma together, and we’re in the same unit flying for the National Guard,” CW4 Rutledge said.

CW3 Jon Welsh of Moore, Okla., joined the Oklahoma Army National Guard as an Infantry Soldier before transitioning to a helicopter pilot. He has flown for News Channel 4 in Oklahoma City covering a multitude of stories, including the May 20, 2013, tornado in Moore.

“I kind of refer to my job as on-demand services,” CW3 Welsh said, correlating the similarities of being ‘Always Ready’ with the Guard. “They want you ready to go when they need you,” he added.

CW4 Will Kavanagh has flown for News On 6 in Tulsa since 2009. He has flown hundreds of major news stories in Tulsa, but he also fills in for his sister station, KWTV News 9 in Oklahoma City. Like CW3 Welsh, CW4 Kavanagh also enlisted into the Oklahoma Army National Guard as an Infantry Soldier before transitioning to a helicopter pilot.

CW4 Chase Rutledge, originally from Tecumseh, Okla., joined the OKARNG to pay for college and became a helicopter pilot a few years later. Compared to the other two pilots, his position is a little different, as he works full-time for the Oklahoma Army National Guard supporting local, state and federal agencies and is a part-time pilot for KOCO News Channel 5 in Oklahoma City.

The Competition and Camaraderie

On the civilian side, CW3 Welsh, CW4 Rutledge and CW4 Kavanagh compete against each other within the same news market. The objective for each? Get to the story first. But CW4 Rutledge jokes that there is no real competition between the three.

Though each pilot’s news helicopter has different capabilities, all three have successfully won the coverage race at least once, providing an open door of friendly jabs toward one another.

“I thought you were a pilot,” CW3 Welsh joked with CW4 Kavanagh after taking advantage of the wind to push his chopper and beat CW4 Kavanagh to a story. “Shouldn’t you look at wind speeds?”

“That’s about the only time he’ll beat me,” replied CW4 Kavanagh. “With the help of Mother Nature.”

“That is the pilot mentality,” CW4 Kavanagh continued, referring to their competitive spirit. “We’re Type-A people. If we’re not competing, we’re sleeping.”

Through that competitiveness lies an unbroken bond that stems from their years in the Guard together, including a deployment to Iraq.

“There’s a camaraderie and professionalism that we have toward each other,” CW3 Welsh said. “You don’t really have to worry about offending somebody or stepping on toes because we’ve known each other for almost a decade now and flown together in the Guard pretty much the whole time.”

“Through all that, the humor and razzing, we do learn and we do bond,” CW4 Kavanagh added. “I’m really happy to have those guys out there with me flying, as civilians and in the military.”

“We take care of each other for sure. I try to get in Welsh’s shot as much as I can though,” joked CW4 Rutledge.

Although the competition between the three is unwavering, they share the same goal: to keep the citizens of Oklahoma informed, especially during times of severe weather or other dangers.

Into the Storms, the Floods and the Flames

With Oklahoma’s tendency to host tornadoes, floods and fires, the three pilots stay busy. Although their civilian and Guard roles support different objectives, both play an essential part during and after situations like natural disasters.

“In the Guard, when you have storms, you fly away from them. For the station, we fly toward them – and really close,” CW4 Rutledge said.

When disaster strikes, the National Guard is called in to assist by a State’s Office of Emergency Management to provide equipment, personnel or both. The Guard supplements local authorities when under the direction of an incident commander, who is typically a civilian in charge.

CW3 Welsh, CW4 Rutledge and CW4 Kavanagh have all responded to natural disasters on both the Guard and civilian side. While filling their roles as news helicopter pilots, their main response occurs before and during the natural disaster.

One of those occurred on May 20, 2013, when a tornado ripped through CW3 Welsh’s hometown of Moore, killing 25 people, including seven children, and injuring 377 others. The damage total was $2 billion, and the effects are still visible today.

CW3 Welsh was in the sky as the storm developed that day, capturing each moment from the tornado’s conception near Newcastle, Okla., to its most devastating point on the east side of Moore. Television viewers heard him on air that day as he said, “This is right at my house.”

The situation amassing beneath him was surreal. Not only was he concerned about his community, but for his Family as well. The storm developed around the time the school day ended, and CW3 Welsh immediately called his wife to make sure their Family took shelter. But no matter the situation, he had a job to do. He explained the moment the tornado headed for his home.

“I picked the cell phone up. I hadn’t gotten a text yet, but had to report on the tornado. You can’t really fixate or get worried about one thing; you just have to keep moving the pots around so none of them boil so that you can achieve what you’re meant to do.” CW3 Welsh won awards for his coverage and calm demeanor that day, but more importantly, he saved countless lives.

According to CW3 Welsh, he has met people that have told him he saved their life because they were watching television or listening on the radio and reacted based on his reporting of the storm’s location. He insists he was just doing his job. As Oklahoma Guard Soldiers rolled in with personnel and equipment to assist local authorities after the storm, CW3 Welsh flew above his National Guard brothers and sisters, providing coverage of relief efforts for weeks.

Tornadoes aren’t the only worry for Oklahoma. Storms during the spring of 2015 ended an Oklahoma drought with floods in parts of the state. For CW4 Rutledge, the floods provided an opportunity to speak over the air for the first time as the backup helicopter pilot for KOCO News Channel 5.

“It was the biggest flooding story in Oklahoma,” CW4 Rutledge said. “I was really honored to be able to cover that.” His coverage from the air enabled local authorities and other agencies to establish passable routes, assess damage and begin relief efforts and reconstruction of damaged areas.

This year, Oklahoma’s wildfire season set records after untamed flames burned thousands of acres across the state, stretching into Kansas. While flying for News 9, CW4 Kavanagh soared above the flames alongside his brothers in uniform while they dropped water buckets on a large wildfire near Edmond, Okla. Because of his experience in the Guard, he was able to explain the process of dropping water on wildfires while on air, which was unknown to many who haven’t served in that particular position.

“It’s almost instructional to me the way I report,” CW4 Kavanagh said. “That then helps people understand what they are seeing.”

Having the ability to multitask is key for these three pilots. From wheels up to wheels down, pilots must simultaneously balance a swarm of responsibilities. With the experience gained from flying for the Oklahoma National Guard, they are better prepared to fly for their news stations.

“You have to make quick decisions quite a bit,” CW4 Rutledge said. “Being able to balance all of that – talk on the radio to other aircraft, talk live while you’re doing the broadcast and pay attention to flying – is difficult, and the Army prepared me for that.”

For all three, the experience and discipline gained from the Oklahoma National Guard has helped them become better pilots.

“There are a lot of things the Army has given me that make me better in my civilian career than I would’ve been,” CW4 Kavanagh said. “The discipline to stay to standard and not deviate from what we know is best practice in aviation, [that came from my military training].”

CW3 Welsh agreed that there are benefits to working as both a news pilot and a Guard Soldier. “You can really work together as a team,” he said. “Even though I’m in the Guard, today I’m being paid by Channel 4. Either way, we’re helping achieve the mission.”

With all the joking between the pilots aside, the value of what these three men do for the community, in both roles, is immeasurable.

“Anytime you get a chance to pay back your community, it’s very rewarding. That’s one of the reasons I joined the Guard, because we have an actual stateside mission,” CW3 Welsh said. “I enjoy the aspect of getting to help people.”

“The things I’m most proud of happen when I work with the police and fire departments,” CW4 Kavanagh explained. “At my discretion, I’ll put a police officer or fire department personnel on the helicopter and we go on people searches.”

CW4 Rutledge stated that he loves letting Oklahomans know what’s going on and helping them in both of his roles. “There have been times when I’ve gone from reporting the tornadoes,” he added, “to putting on my National Guard uniform, to jumping in the National Guard helicopter and working it from the air in a different platform.”

Oklahomans can take comfort in knowing that these three pilots have their eyes in the sky, as both Citizens and Soldiers. 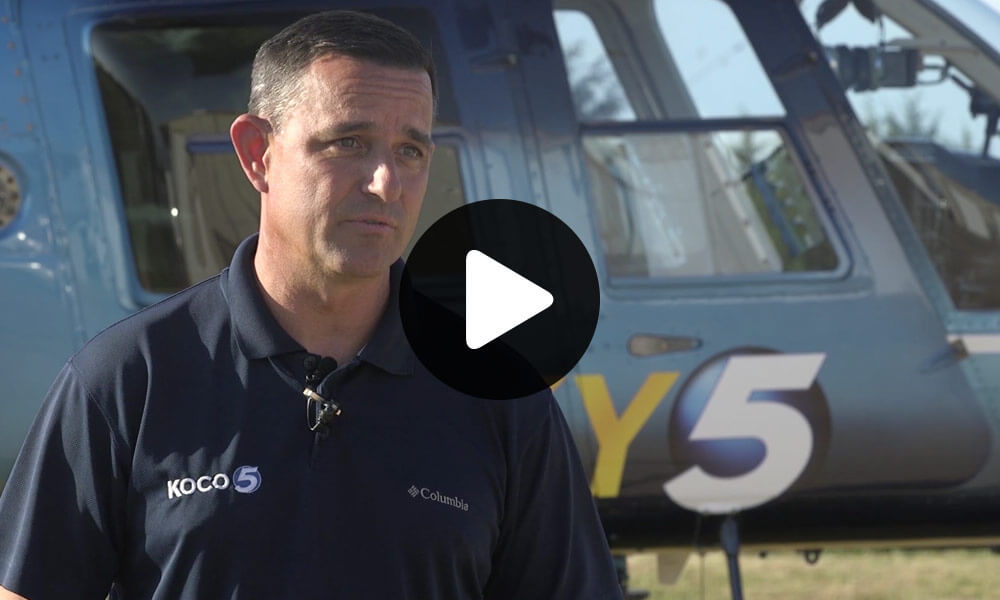 END_OF_DOCUMENT_TOKEN_TO_BE_REPLACED

END_OF_DOCUMENT_TOKEN_TO_BE_REPLACED
The Soldiers Behind the Ranks
CitizenSoldier 2018-05-08 May 8, 2018
Always Ready

The Soldiers Behind the Ranks

Guard Soldiers bring with them an abundance of diverse talents, skills and education. These attributes are often reflected in transferable work skills...