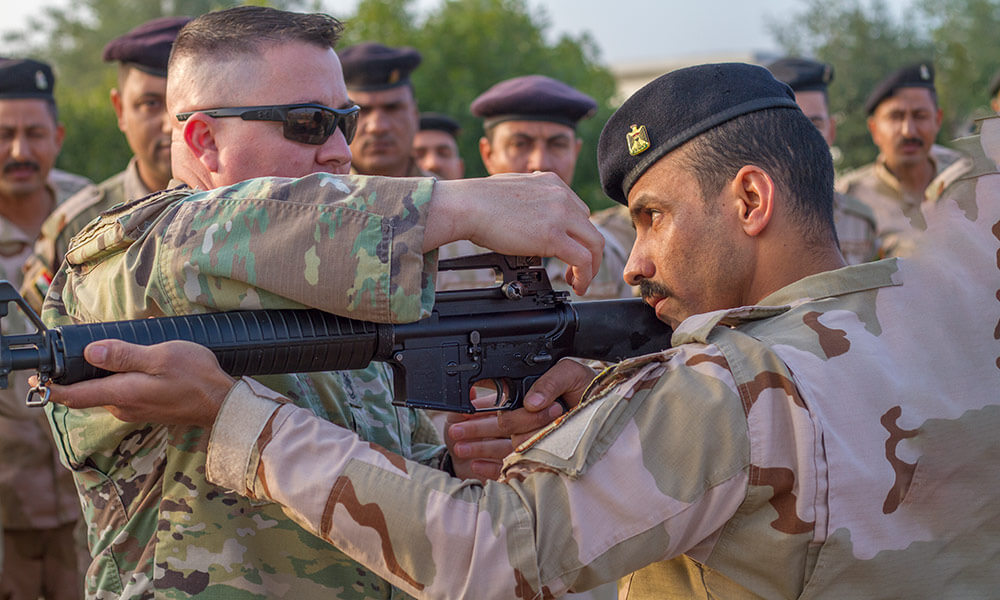 Working in support of Task Force India Bravo, Mississippi Soldiers deployed late in 2018 to train Iraqi soldiers for almost nine months on a variety of subjects. Task Force India Bravo has a goal of working with Iraqi Security Forces and aiding them in the development of an inclusive and sustainable force that can protect the Iraqi population, secure its sovereign borders and ensure the lasting defeat of ISIS. Made up of 43 highly trained U.S. Soldiers, the task force consists of recon scouts, a maintenance team, a medical team, an intel team and logisticians. Each team supports an Iraqi counterpart during what is an Advise, Assist, Accompany and Enable (A3E) mission.

“Our task is to work side-by-side with the division and brigade commanders and facilitate training, mission planning, modernization and accompanying Iraqi forces when deployed to forward AOs [areas of operation] in the fight against ISIS,” said SFC Michael Garner of the 155th Armored Brigade Combat Team. 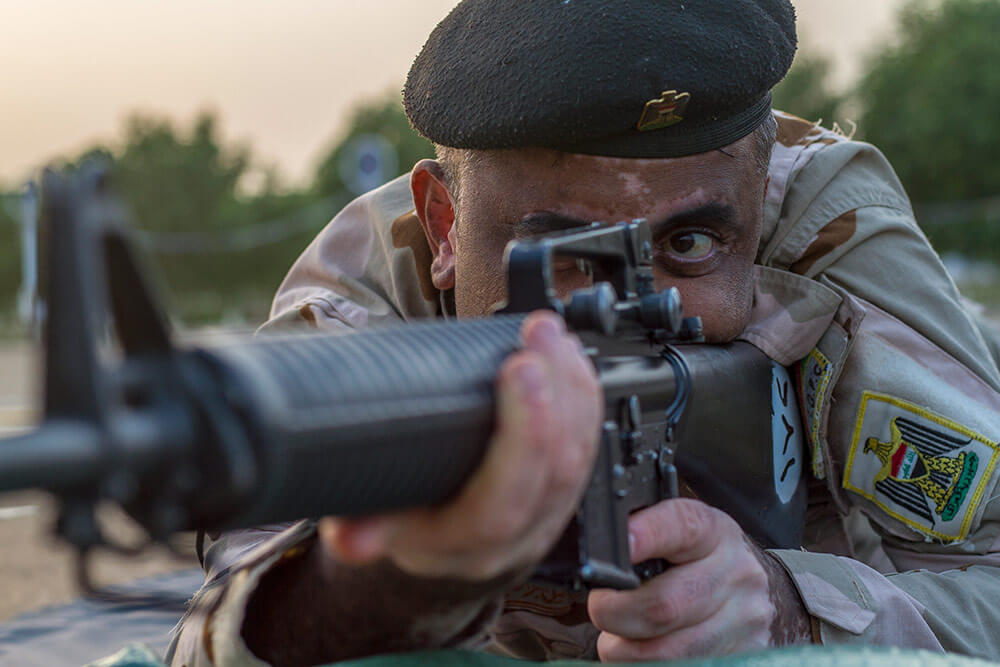 After being on the ground for just over a month, the positive impacts of the Mississippi task force teams could already be seen in Iraqi force operations. The signal team facilitated the communications training and installation modernization of over 430 Harris radios in Iraqi Humvees, personnel carriers and T72 tanks. The medical team instructed Combat Life Saver courses for over 360 Iraqi soldiers, improved medical conditions within the brigades and provided life-saving support to injured Iraqi soldiers. The logistics and sustainment team assisted in streamlining the maintenance parts flow and supply structure of the 9th Iraqi Armored Division. The Maintenance team—in addition to training 92 Iraqi maintenance crews on the forward repair system (FRS)—most notably developed a program of instruction that was approved by North Atlantic Treaty Organization (NATO) and the Iraqi Minister of Defense to be used as the standard of training across the entire Iraqi military.

Beyond this list of impressive contributions, Task Force India Bravo has been especially impactful in the area of marksmanship. The 9th Iraqi Armored Division, to which India Bravo is assigned, is the only armored brigade in the Iraqi army and currently the most modernized and battle-proven element in the Iraqi military. India Bravo has so far trained with more than 550 Soldiers of the 9th and helped increase the Iraqi soldiers’ marksmanship accuracy by more than 50 percent. By helping to improve the Iraqi soldiers’ marksmanship accuracy by such a substantial percentage, the Soldiers of India Bravo are directly impacting the overall lethality of the entire Iraqi force. 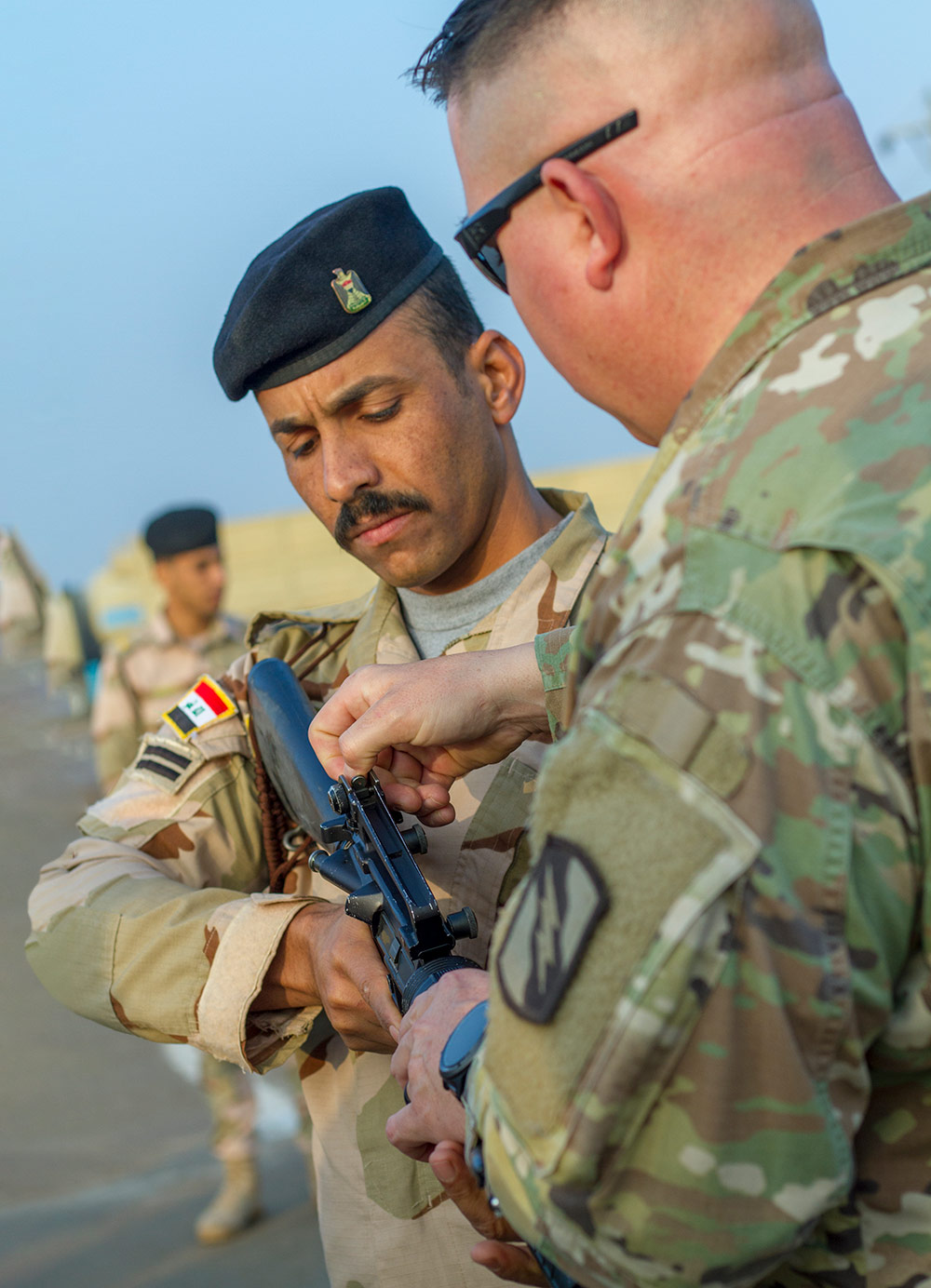 To bring about such dramatic change, the Mississippi Soldiers first established a customized environment in which the Iraqi soldiers could learn the fundamentals in marksmanship. Before they could begin a successful training, the members of India Bravo needed to understand where the Iraqi soldiers stood in relation to marksmanship skills.

“We were requested by [the 9th’s] division commander to assist in marksmanship training,” said SFC Garner. “We went out and basically assessed their skills, without giving any instruction, just to see where they were and what needed to be improved upon. We then focused on the parts they needed the most help with.”

According to SFC Garner, Iraqi soldiers tend to struggle in marksmanship due to a combination of shortages in ammunition and supplies, shortages in training time and shortages in qualified instructors. The Mississippi Soldiers were able to fill those gaps and provide the Iraqi soldiers with the quality knowledge and training they needed to succeed. 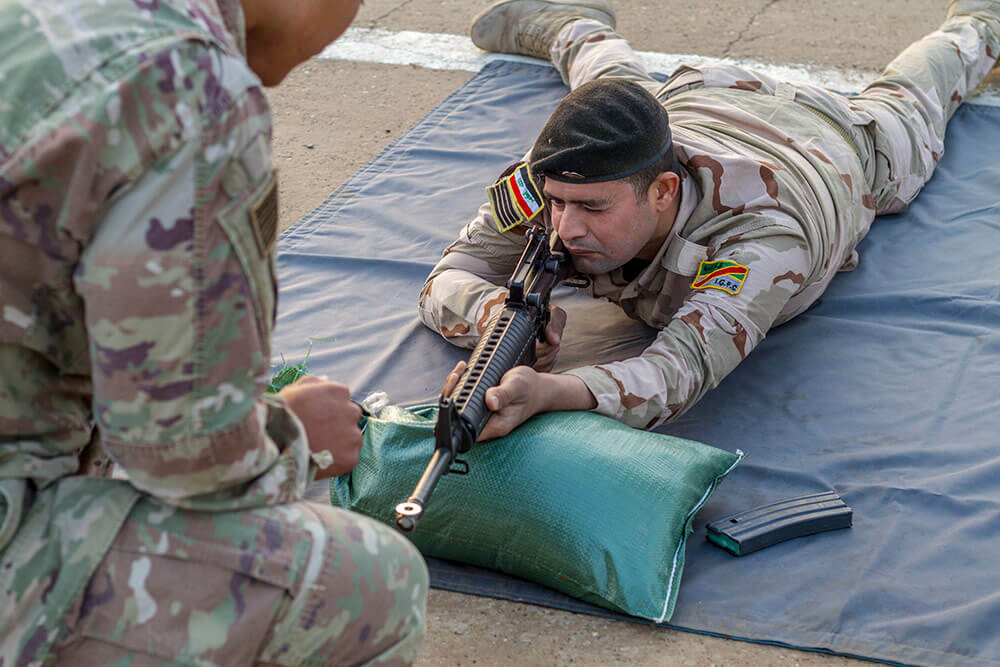 “Our Task Force was instrumental in providing highly qualified and experienced instructors, [including] range crews to facilitate live-fire practical exercises. Through the use of CTEF [Counter-ISIS Train and Equip Fund], we were able to divest ammunition to support the marksmanship program,” SFC Garner said. “This allowed the Iraqi soldiers to receive in-depth classroom instruction, hands on familiarization of their M-4 rifle and the resources to conduct live-fire weapons zero and qualification to meet U.S. marksmanship qualification standards.”

Task Force India Bravo developed a training course for the 9th Division that is based on a NATO primary method of instruction—the inclusion of both classroom and practical exercises. The classroom portion of the training covered the basics of marksmanship, such as sight alignment, trigger squeeze and positioning for accuracy. Though weapons qualification in the Iraqi army differs from the U.S. Army, the classes focused on marksmanship fundamentals, which are universal.

“The [most important] things we have been able to push to them are the small things, the breathing, the proper trigger pull and just the small fundamentals,” SFC Garner explained. “The fundamentals of marksmanship are key in meeting the Army standards and they [help to develop] a confident and lethal Soldier with the ability to neutralize the enemy. 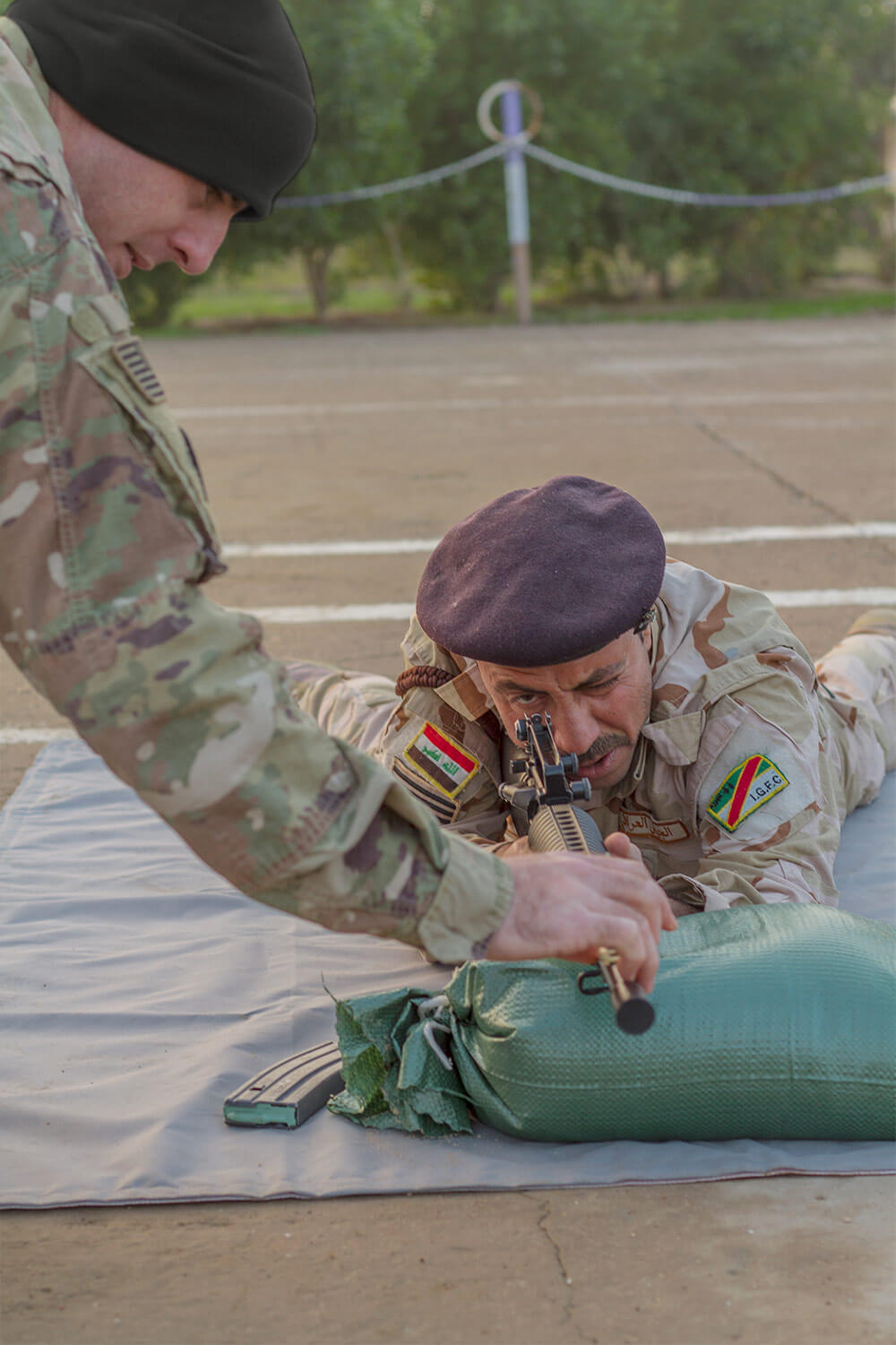 “Weapon familiarization builds confidence and accuracy,” he continued. “A Soldier’s primary tool is only as accurate and functional as its operator. Weapon maintenance, target acquisition, shooting positions and weapon malfunction drills are vital to soldier marksmanship fundamentals.”

As most of the India Bravo Soldiers speak neither Arabic nor Kurdish, teaching the Iraqi soldiers—most of whom do not speak English—proved challenging at times. Thanks to knowledgeable and trustworthy interpreters, communication challenges were easily mended.

“We teach the class through the use of interpreters,” SFC Garner explained. “We have some great interpreters that know [marksmanship] fundamentals so they have a basic knowledge [of the subject matter]. It is not new terminology to the instructors or to the interpreters, which makes it a bit easier.”

SPC Kyle Underwood of the 1-98th noted how the language barrier was a bit more of an obstacle outside of the classroom.

“There were times we would see a soldier firing and there was something we could help them with, but if the interpreter was busy down the line it was hard to explain things to the soldier,” said SPC Underwood. “You just had to wait for [the interpreter] to be cleared up so they could come and help instruct the soldier.”

At the start of the marksmanship course, the Iraqi soldiers had much room for improvement, but hard work and dedication from both the students and instructors led to impressive results.

“The very first unit we observed at the range had about 65 to 70 soldiers, and only four or five of them were able to actually hit the target without us giving the instruction,” explained SFC Garner. “They were probably at 15 to 20 percent accuracy. The biggest accomplishment was going back to the range with the same group [after the training] and having 70 to 75 percent of soldiers able to accurately put rounds on targets.”

“To [know] where they started and then work with them and see them get better, it’s a good feeling,” said SPC Matthew Driskill of the 1st Platoon, Comanche Troop, 1-98th.

SFC Garner noted how the training demonstrated to the Iraqi soldiers that marksmanship requires committed training, regardless of the military in which one serves.

“I think [the Iraqi soldiers] have the mentality that we’re always just ready to go. They don’t grasp the multiple training days we put in before we actually go to the range to qualify,” SFC Garner explained. “We train all the time before we go to the range. We go through the same process to make sure that all our Soldiers remember the basics.”

This mission with Task Force India Bravo serves as SFC Garner’s third deployment to Iraq, his first occurring in 2005. He had the opportunity to work alongside Iraqi soldiers on past missions and he noted the ongoing significance of the role the United States is playing in the long-term advancements being made by the Iraqi military.

“Going from 2005 to now and seeing the progress of the Iraqi forces, it [shows the importance] of what we are actually doing here.”

Task Force India Bravo’s A3E mission is proving to be a mutually beneficial experience that will have enduring effects for the stability of the Iraqi nation. Not only are the marksmanship skills of the Iraqi soldiers drastically improved, the Iraqi military is also benefiting from improved training standards across its entire operation, thus leading to increased interoperability between U.S. and Iraqi forces when units are together in theater. This group of Mississippi Soldiers will be able to walk away from this mission feeling proud to have made a lasting and positive impact.

“The accomplishment [the Iraqi soldiers] feel within themselves, you can see it written all over their faces,” said SPC Driskill. “It’s good to know that we were a part of that process.”