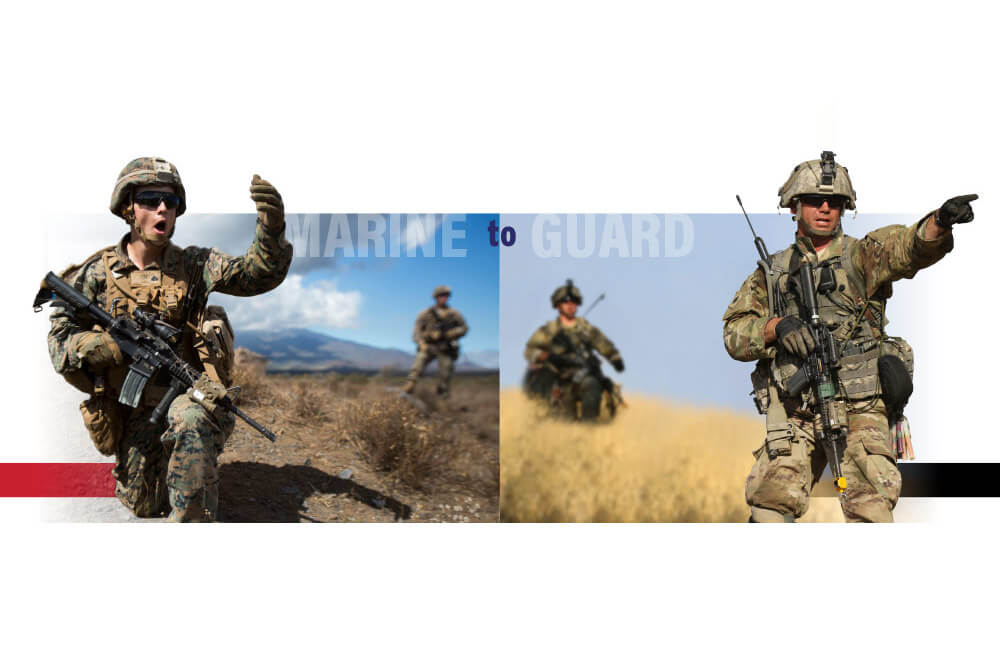 Do you know an exiting Marine still looking to serve?

The National Guard has introduced a program dedicated to enhancing the component’s force with already skilled and dedicated service members – specifically those who possess the highly specialized training unique to the Marines. The program is Marine to Guard (M2G), which began as a pilot program in 2016 and is currently in full rollout.

Spearheaded by LTC Bruce Delaporte, a former Marine and the current senior operations officer for the National Guard Bureau’s Strength Maintenance Division, M2G began with the idea to expand upon the common practice of strengthening the Army National Guard with prior service members.

“The idea was, it is much better to bring in someone with prior service and training into the Guard,” LTC Delaporte said. “We look for opportunities to bring prior service, both from the Army and also the Marine Corps and other branches.”

After receiving clearance from leadership at Headquarters Marine Corps, a team from the Strength Management Division began putting into place a pilot program that would send Army National Guard recruiting personnel onto Marine bases to speak with transitioning Marines about the opportunities available in the National Guard.

“Upwards to 70 percent of Soldiers are being retained in the Army National Guard,” explained LTC Delaporte. “The Marine Corps keeps approximately 16 percent of its first-term personnel. It’s a very young force. So, we looked at how we could help these young men and women who joined the Marine Corps to continue with their service after they’ve transitioned.”

The pilot started with just one location at Camp Pendleton, California. After over a year of success as a pilot program, the leadership team at Strength Management Division worked once again with Marine Corps leadership to have the pilot converted into a program of record, beginning this year.

“We at the National Guard saw this as a win-win opportunity,” LTC Delaporte said. “We are helping Marines continue their service and we’re filling our ranks with quality men and women.”

SGT Lowell Muenchau, with Charlie Company, Recruiting and Retention Battalion of the California Army National Guard, was the coordinator for the M2G pilot program. Also a former Marine, SGT Muenchau was able to use his first-hand experience to share with exiting Marines a detailed picture of how the Guard could help them accomplish their goals.

“I would brief the transitioning Marine on the opportunities the National Guard could give them to continue on their service wherever they may go,” explained SGT Muenchau. “I would give them other options on how to continue their service and do what they need to go back home, or go to school, or other things they wanted to pursue. I let them know the National Guard can be worked into that, and how they could bring their experience with them.”

The M2G program is open to both enlisted Soldiers and officers. Sixty-eight Marine Corps military occupational specialties (MOSs) directly translate into the Guard, without any required retraining. The program also has opportunities for Marines who want to continue their service, but would like to change their MOS.

While the cultures of the Marines and the National Guard manifest inherent differences, SGT Muenchau noted the transition as straightforward for most Marines.

“Marines are famous for ‘adapt and overcome,’” explained SGT Muenchau. “It’s a new military service and with any new job or transition, there’s going to be different challenges. If they come in with an open mind, they’ll be just fine.”

For Soldiers wanting to inform a Marine about the M2G program, SGT Muenchau recommends focusing on the limitless benefits a Marine can gain from service in the Guard. Soldiers should ask what ambitions the Marine has and mention the correlating benefits the Guard has to offer. Benefits like State tuition assistance, scholarships, career development and flexibility are just a few of the benefits that may be of interest to a transitioning Marine.

“A lot of [Marines] want to continue in service, but they also have higher ambitions that they want to [achieve],” explained SGT Muenchau. “They want to be with Family, be a working professional, go after their academic careers or maybe they want to be an officer. [The National Guard] gives them other options [for pursuing] those particular endeavors.”

If a Guard Soldier knows a Marine with such ambitions, SGT Muenchau noted, they should encourage that Marine to learn about the M2G program. Using personal stories, Soldiers can share what they have gained from the many benefits associated with the Army National Guard. The opportunity to inform a transitioning Marine about this incredible opportunity gives Soldiers the ability to make a direct impact on the force.

“Think of yourself as the hiring manager,” SGT Muenchau noted. “When you are talking to your buddy, you are building your own military force with people that you know are qualified. You are bringing in people with experience who have those core values that we want. This gives you the ability to make the Guard stronger.”

With the help of National Guard Soldiers, the M2G program will continue to succeed in both further growing the Army National Guard’s strength in force numbers and forming strong bonds between Marines and Guard members.

SGT Muenchau said, “The Guard is opening their arms to Marines and saying ‘hey, come over here and continue your career. Bring your leadership, bring your experience and let’s make this organization bigger, better and stronger.’”