In January 2019, criminal mastermind Dr. Nevil and his Home-Grown Violent Extremist organization, the Brotherhood, made catastrophic plans for the San Francisco Bay Area of Northern California. Armed with improvised explosive devices, radiation dispersal devices, and chemical, biological, radiological and nuclear or explosive (CBRNE-type) dispersion devices, the Brotherhood was determined to induce mass killings throughout California to coerce U.S. government officials and civilians to submit to their political, social and financial demands. 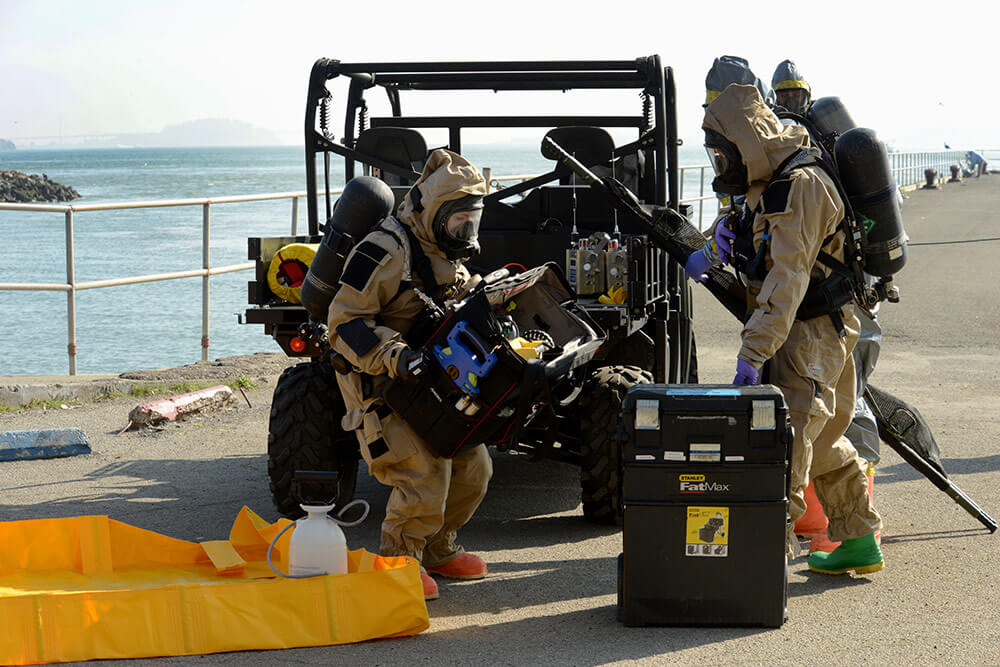 In this simulated terrorist attack, Army National Guard members from Weapons of Mass Destruction Civil Support Teams (WMD-CST) worked with regional first responders to respond to the fictional impending threat. This was the crux of BAYEX 19.

Started in 2002, BAYEX is an annual training exercise that provides participants with training for a multi-jurisdictional and multi-agency response to a complex coordinated terrorist attack. The exercise focuses on onsite management and interoperability of communications networks, with evaluations of response concepts, plans and capabilities.

BAYEX 19 highlighted the potential threat level a terrorist organization could bring to a major metropolitan city—in this case, the San Francisco Bay Area.

“The key objectives were focused on responding to a chaotic environment, resulting from a complex CBRNE attack in the greater San Francisco area, which is one of the top targeted areas by terrorists,” said LTC Keith Haviland, commander of the 95th CST. “Whether it’s Al Qaeda, ISIS, even Hezbollah, there are a lot of terrorist organizations that would like to do nothing more than harm the infrastructure financially, as well as the psychological strength of the greater Bay Area.” 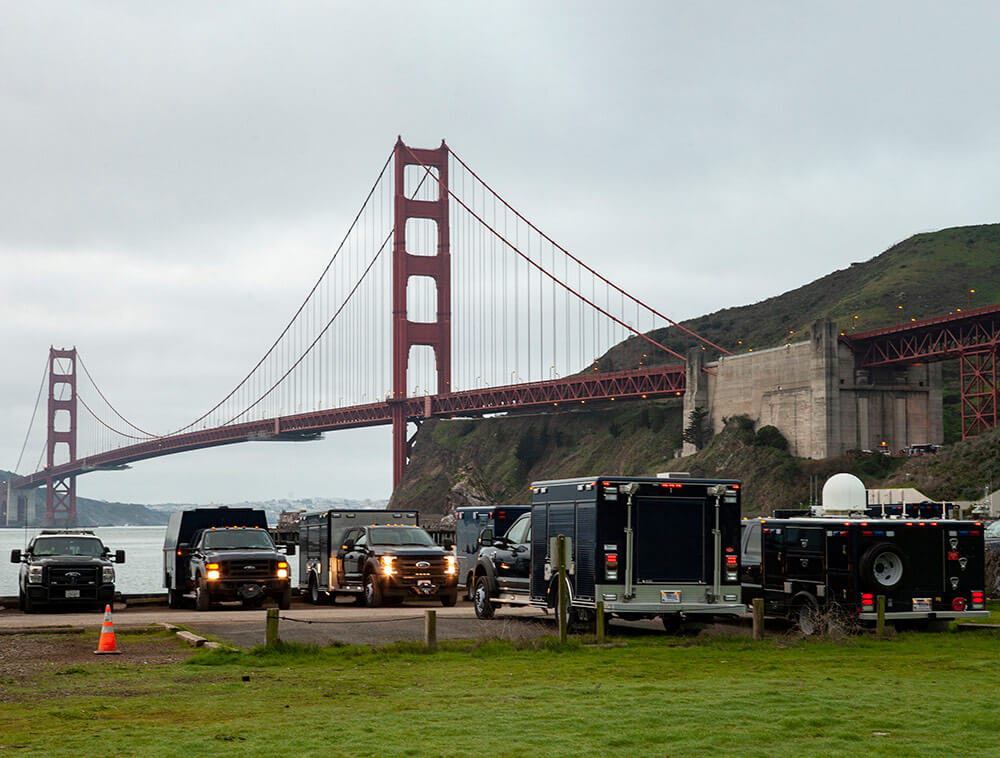 BAYEX’s overall scenario featured a notional, multifaceted CBRNE attack that targeted commerce, modes of mass transit and places of international interest. When real life threats like those simulated in the exercise come to life, CSTs are deployed to respond to the situation. They provide instrumental personnel and equipment to support local and State agencies when they become overwhelmed by large-scale disasters or attacks.

The mission of CSTs is to support civil authorities at a domestic CBRNE incident site. These highly specialized units identify agents and substances, assess current and projected consequences, advise on response measures and assist with appropriate requests for additional State and federal support.

California’s 95th and 9th CSTs, Nevada’s 92nd CST, Oregon’s 102nd CST and Idaho’s 101st CST came together for BAYEX 19, engaging in realistic scenarios that tested their response techniques and communications skills. As they would in a real attack, the teams worked side-by-side with local, State and federal agencies, including the FBI, U.S. Coast Guard, San Francisco Office of Emergency Management and the California State Office of Emergency.

BAYEX is designed for multiple CSTs, agencies and organizations to collaborate, thus enhancing their mission capabilities. The exercise is unique in its “right of boom” approach to the scenarios that tests the participants’ abilities to collectively respond after an attack. 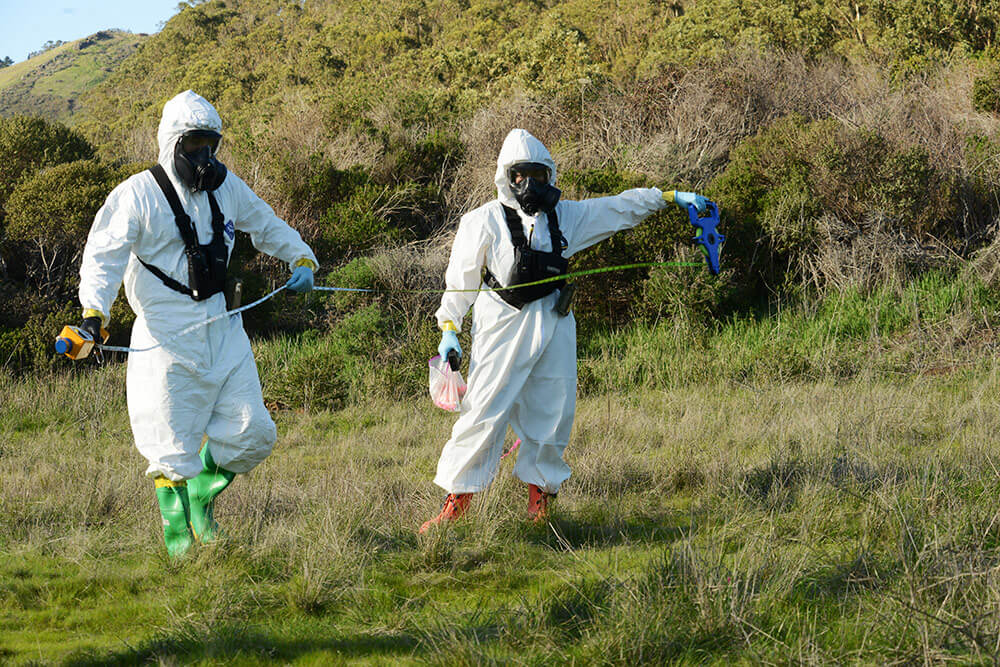 “A lot of times you work with left of boom, which is the pre-release where you find it before it goes off or the attack was thwarted,” explained MAJ Nathan Serena, deputy commander of the 95th CST and director of BAYEX 19. “But [BAYEX] is all right of boom. It’s all post-release, post-detonation type stuff. We try to train more on response and consequence management.”

The exercise included scenarios at five different sites over the course of four days. The first site was on Alcatraz Island, site of the infamous former prison—now a major tourist attraction. Participants were tasked with evacuating the island after the dispersion of a white powder throughout the facility and across the island. The second scenario took place on a Bay Area Rapid Transit train near the Millbrae station. This particular scenario tested the participants’ ability to identify and decontaminate an unknown substance while in a mass transit environment. The third site took the participants to Fort Baker in Sausalito, California. Set to be near the Brotherhood’s hideout, participants searched the area for potential radiological signatures.

The Oakland-Alameda County Coliseum, home of the National Football League’s Oakland Raiders, served as the backdrop for the fourth scenario, where a drone dispersed a white powder over a crowd of spectators. The scenario also incorporated a hostage situation where an armed assailant wore a suicide vest. This scenario tested multiagency coordination and response, as well as unmanned aerial system (UAS) capabilities and detection. The fifth and final site took place on the water on a Golden Gate Ferry vessel traveling from San Francisco to Richmond, California. This last scenario tested shore-based response capabilities, decontamination and incident command system integration. 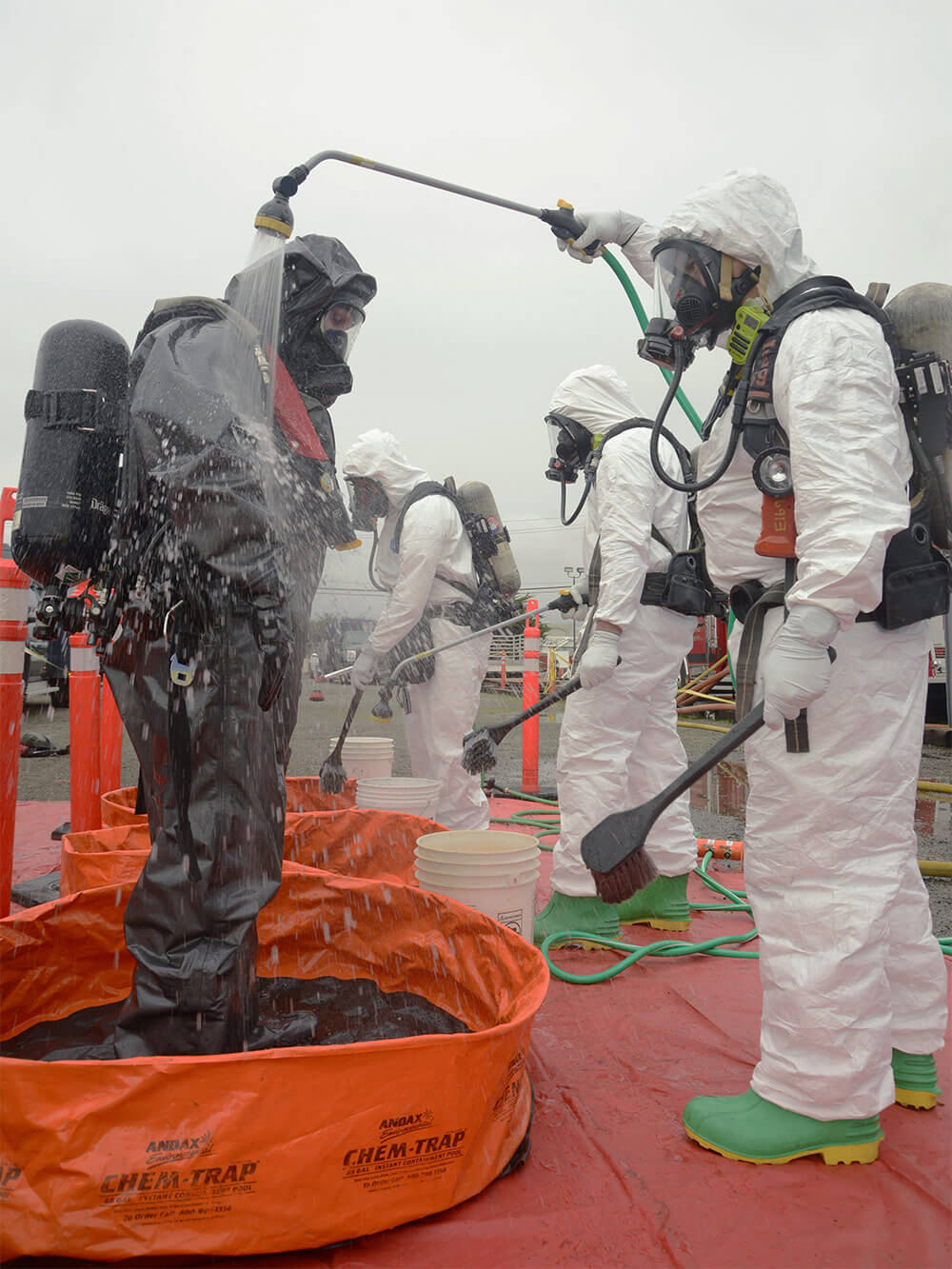 With approximately 1,800 participants from multiple States and entities, teamwork and collaboration was crucial to success during the exercise’s complex scenarios. Though it was challenging, the complex scenarios included as part of BAYEX pushed the CST members to meet multiple training requirements and build readiness while also learning where they needed to improve.

“I would say the most challenging aspect was working as a multi-CST, because we learned that some commanders have different philosophies on how to do these types of missions,” explained MAJ Serena. “But we made [BAYEX] challenging on purpose. We [didn’t make] it easy on them. We discovered quite a bit of interconnectedness that we could definitely improve on. But as the exercise grew towards the latter parts, we were humming right along and working well together.”

BAYEX 19 fostered the type of collaborative environment that is critical to accomplishing a CST mission. The exercise allowed Soldiers to form the necessary bonds with other team members and first responders that will serve to increase interoperability when and if a real-life attack happens. 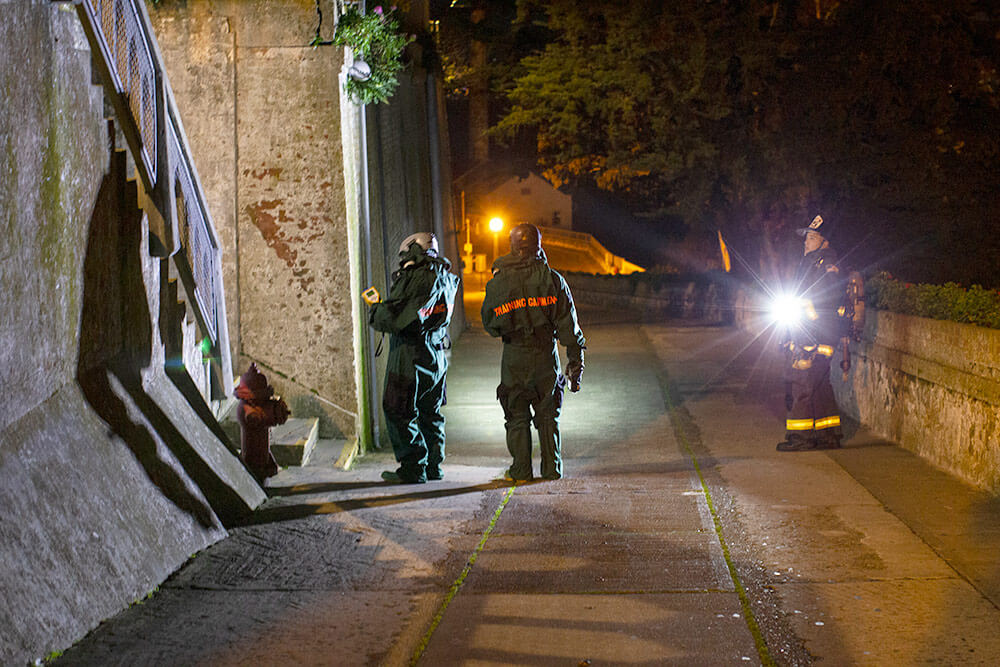 “BAYEX was a great experience,” said 1SG John Fransler of the 92nd CST. “Not only is it great to work with professionals on other Civil Support Teams, but responding with the San Francisco Bay Area’s first responder community made the challenges of each exercise easier to manage. The 92nd CST is the closest CST to the Bay Area so building the relationships with the 95th CST and all the first responders is key to being able to successfully respond to, and assist with, a disaster in the Bay Area.”

1SG Fransler went on to say, “The biggest learning point [from BAYEX 19] is how important it is to build and maintain relationships. It’s about building trust between agencies and getting agencies to understand the capabilities we bring to help them when an incident occurs.”

Though the scenarios presented during BAYEX 19 were complex, the participating Soldiers and first responders rose to the challenge. Some noted enjoying the dynamic settings that required participants to put their critical thinking and effective communication skills to the test.

“All the exercise sites were set up and managed as close to real-world as possible,” said 1SG Fransler. “I personally enjoyed the challenge of working in Alcatraz Island. Being on Alcatraz at night conducting CBRNE operations was surreal.” 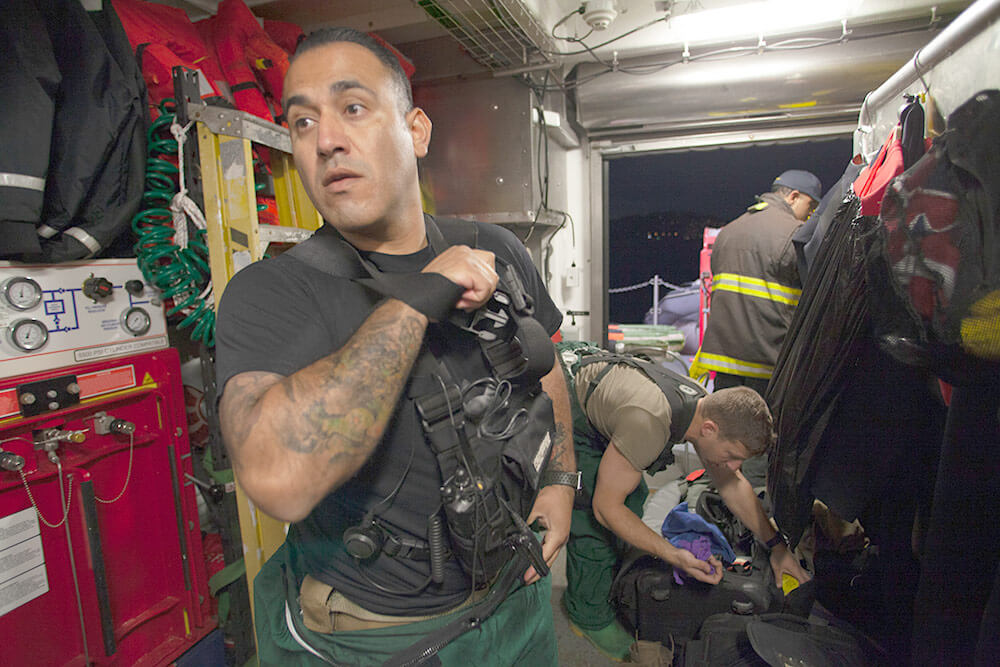 LTC Haviland noted the scenario at the Oakland-Alameda County Coliseum as the standout event in his opinion.

“One of the highlights of the exercise was implementing a unmanned aerial vehicle [UAV] attack on the Oakland Stadium, which required responders to deal with a complex event that they had not exercised in the past,” LTC Haviland said. “With the imminent threat and rising potential of suicide UAVs, whether with explosives or CBRNE materials, the need for robust counter-UAS capabilities that are readily available for first responders and the WMD-CST community is very evident.”

MAJ Serena noted a similar sentiment, “[BAYEX] exposes [participants] to what the potential threat might be. It shows potential hazards and how big things could get. The drone attack on the Oakland Coliseum only had 25 role players. Could you imagine thousands of people being affected and trying to get out of the Coliseum simultaneously while also having some type of exposure on their bodies? I think exposing [Soldiers] to how these things could go down and how big they could be is important for Guard members.” 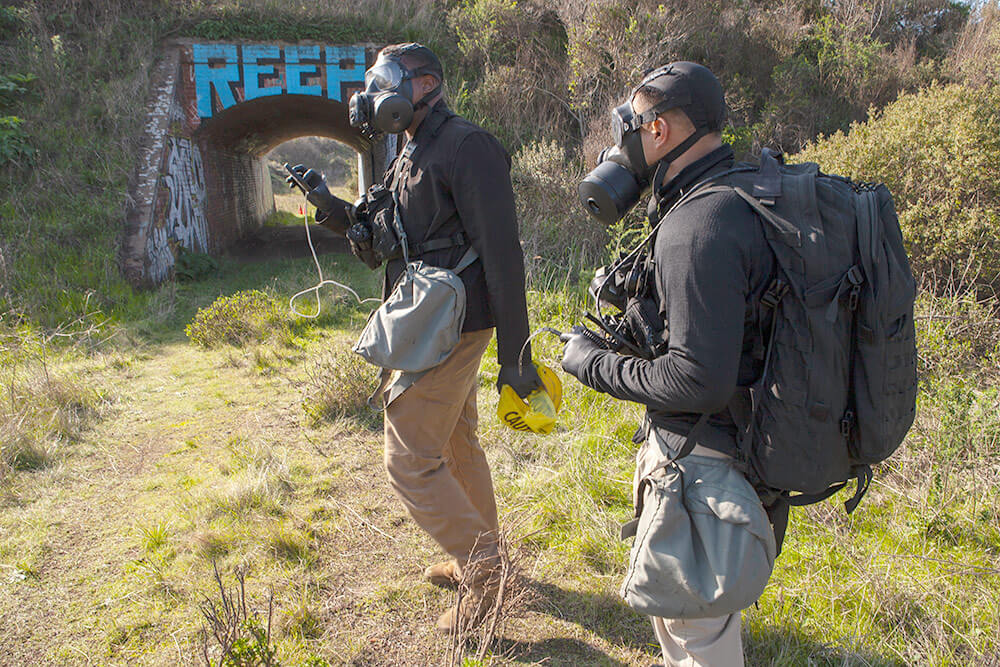 The exercise ended with a high-speed on-the-water scenario that could be all too real in a coastal city where residents rely on the waterways as part of the city’s major thoroughfares.

“On the last day, which we called the finale, I was actually a role player. I got to see the Idaho and Oregon CSTs on the fire department response boats going across the water at 60 miles an hour to do a deck-to-deck boarding of a ferry. It was cool seeing them climb up the side and get over the top of the rail to do what they needed to do.”

BAYEX 19 offered participants the opportunity to train in complex scenarios, reinforce vitally important relationships and, ultimately, leave the exercise better equipped with the tools needed to respond to a CBRNE attack. Now, if a real Dr. Nevil threatens the Bay Area, the CSTs and first responders will be even more prepared, armed with the knowledge and training to foil his evil plot.