COL Joseph Green wasn’t bragging when he said his brigade’s Annual Language Conference is the center of gravity for language excellence in the military. Subordinate to the U.S. Army Intelligence and Security Command, the Utah Army National Guard’s 300th Military Intelligence Brigade is the only linguist brigade in the entire Department of Defense (DoD). 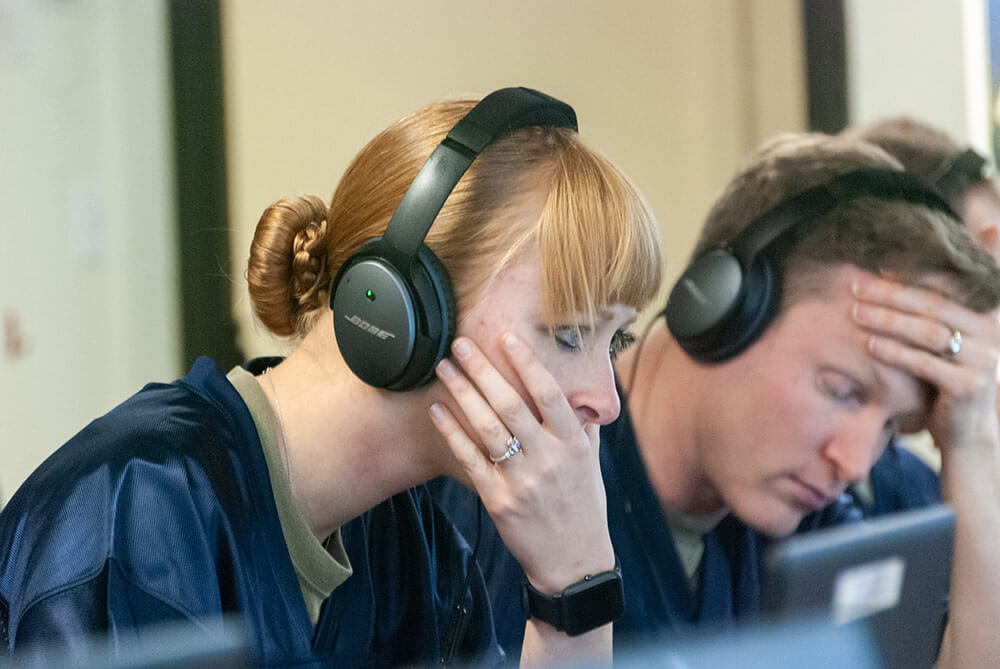 The 300th provides linguistic support to U.S. Army units operating around the globe. With approximately 1,400 members, roughly 90 percent of the brigade is made up of trained Army linguists. The brigade’s Soldiers, all trained in human intelligence, counterintelligence and signal intelligence, are fluent in a collective 19 documented languages, with a heavy orientation toward Arabic, Persian and Korean.

As the DoD’s singular linguist brigade, the members of the 300th are widely regarded as the military experts in the field of linguistics.

“Combining the expertise of language with the MOS [military occupational specialty] is pretty critical because it removes a barrier,” said COL Green, commander of the 300th. “We supported [Army Chief of Staff] GEN Mark Milley during a mission in Afghanistan when he was commanding the 101st Airborne Division. He said that we were the best intel brigade that he had ever worked with because when you can get through that language and culture barrier on the Soldier level, you’re a lot more effective. If you’re doing an interrogation, you can actually ask the questions in the language instead of relying on an interpreter.”

Leading the way for collaboration within the DoD linguist community, this year marked the 30th anniversary of the 300th Military Intelligence Brigade’s Annual Linguist Conference. The two-day event features lectures, panel discussions and presentations on the significant current issues and topics important to the language community. 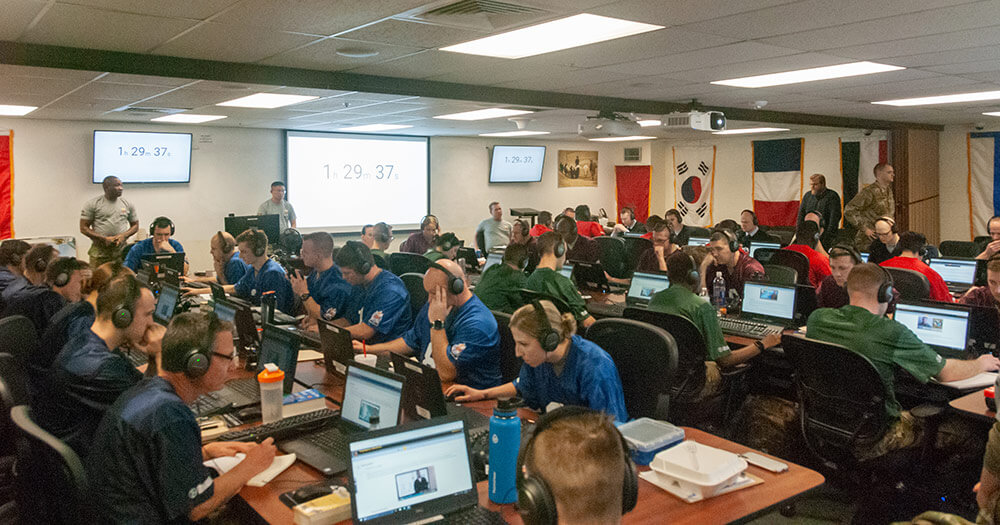 Nearly 500 participants—including members from multiple branches of the U.S. military, all six battalions of the 300th, a member of the British Army Reserves and two civilians—were in attendance this past March for the 2019 conference. This year’s conference had the theme of “The Language-Intelligence Enterprise,” and topics of discussion focused on the strategic importance of language in the collection and analysis of intelligence.

Starting with last year’s conference, the brigade has introduced an element of competition into the conference—The Polyglot Games.

“It’s like a National Training Center [rotation], but for language,” noted COL Green.

“It’s really exciting because this is an event unlike any other language training event out there,” he said. “We build it in the guise of a game, but it’s really not. It is an evaluation exercise. We expect [the competitors] to perform to the best of their abilities, and we provide them with a variety of training scenarios that are as diverse as the types of requirements our linguists face [in the real world].” 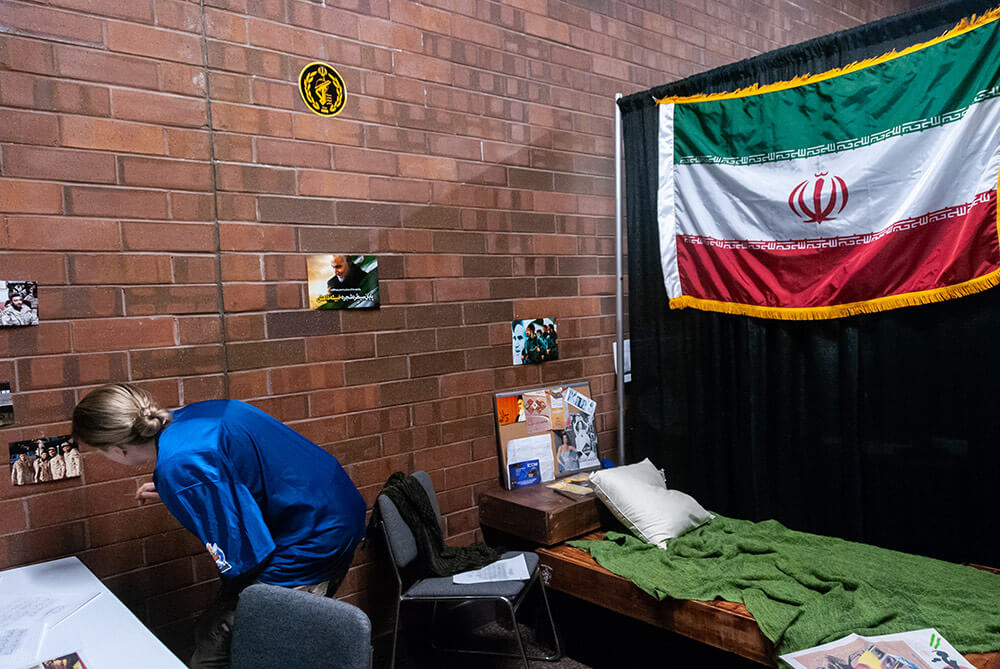 For the games, 44 competitors—all donned in team jerseys— were divided into six teams of seven players. The teams were divided by branch of Service and component–Army National Guard, active duty Army, Navy and Air Force. Each team had one player representing one of seven languages spoken in regions currently of strategic interest within the DoD. Those languages were Arabic, Chinese, French, Korean, Persian-Farsi, Russian and Spanish. Each team competed in seven language and cultural skill challenges that were designed to test the linguists’ functional and operational capabilities. Each event had seven language categories, one for each of the seven linguists to complete.

According to CPT Beckmann, the tasks were designed to be immersive, putting the linguists into circumstances that resemble conditions in the field as closely as possible.

“The event scenarios are absolutely [based on real world] examples,” noted CPT Beckmann. “For the red phone scenario, we took from the training scenario that basically was adapted from the Russian annexation of Crimea. It’s that kind of scenario – a hostile nation invades an ally and we help, are trying to help de-escalate that situation. For the operational skills tests, the audio is all very real. It’s real situations. We’ve just taken that audio out of context and put it into our own context.” 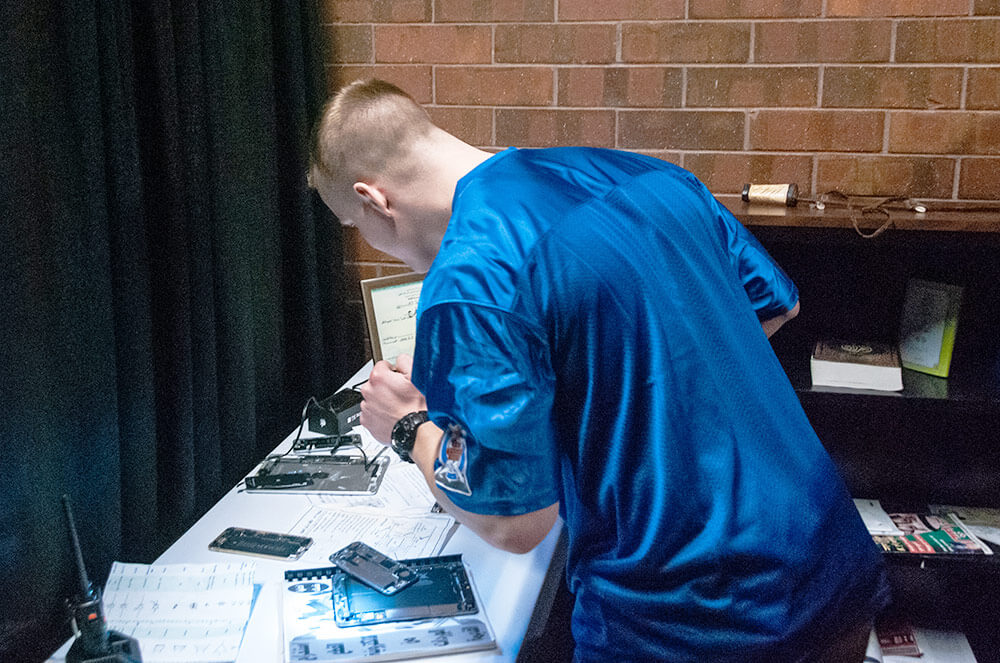 Only in its second iteration, the Polyglot Games have become a major focus of the overall language conference. The games are meant to not only assess the linguists’ ability to exercise language, but also their cultural and regional knowledge and understanding.

COL Green noted how the military linguist field has changed since the Cold War era, when an American linguist might only need to know a few hundred key words or phrases that often passed between Russian tank commanders or aircraft and command units.

Evidence of the Polyglot Game’s notoriety is building within the military linguist community. Last year all of the game’s competitors came from within the 300th, however, this year, the majority of the players were from other units and branches of Service.

“I was actually really surprised to find out how many people are participating this year,” said SGT Alicia Meacham of the 142nd Battalion, 300th Military Intelligence Brigade. “To find out that most of our teams are not within the 300th this time is so exciting. It’s so awesome. With this year expanding to others like the Navy, active duty, Air Force and Air Guard, it’s gotten really big.” 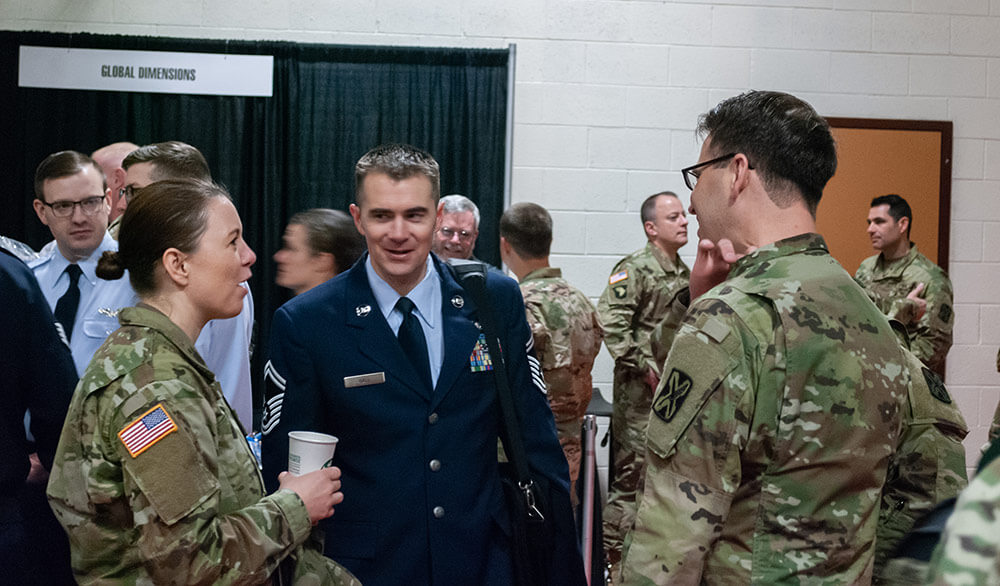 The games also served as a reality check for many of the participating Soldiers who had never utilized their skills in environments so much like the real world.

“It was humbling,” said SGT Amber Guel with Alpha Company, 141st Battalion, 300th Military Intelligence Brigade. “I wasn’t really aware of my capabilities. I guess I’ve never applied them in any aspects like these—intelligence kinds of things. It was interesting to see how my language is supposed to work and how much I need to progress to be able to meet mission capabilities.”

“I thought it was wonderful actually,” he said. “It is a nice variety of exercises. It’s certainly inspired me and will, I think, inspire others to train more at home and do more research, because it really illustrates where you’re weak and where you’re strong.”

At the end of the day, in the military, all training roads lead to an ultimate goal of increased mission readiness. The case was no different for the 300th Military Intelligence Brigade’s 30th Annual Language Conference.

“As far as really assessing whether they can go on a mission or on a deployment and use their language,” remarked LTC Jeremy Stevenson, brigade operations officer for the 300th, “with the polyglot event, you’re using your language in six to eight different ways. So, not only is it a fun competition, but it definitely helps assess mission readiness for linguists.”

After the close of another successful conference, the leadership of the 300th is already in planning for the 2020 event, with a long-term vision of growing the Polyglot Games to reach the level of a Best Warrior-type competition for linguists.

Operational Skills Test: Linguists are required to decipher and translate authentic in-field audio that includes a high level of military chatter and analyze documents that have been partially destroyed or contain higher level military jargon.

Accent Evaluator: Competitors are recorded speaking pre-selected phrases in their assigned language to test the authenticity and accuracy of their accents and pronunciation.

On-The-Spot Report: Without preparation or prior knowledge of the questions, competitors are required to give two 60-second briefings regarding current affairs, politics and military matters occurring in a region where their assigned language is spoken.

Red Phone Scenario: Linguists are required to serve as notional interpreters for a diplomatic negotiation attempting to thwart the start of a war, first translating from the target language to English and then from English to the target language.

Site Exploitation: Competitors are tasked with creating an adversary profile in just 10 minutes, based on 10 to 15 items found in a room recently occupied by the adversary.

Cultural Advisor: Linguists must accurately brief a senior commander, who is unfamiliar with the culture in question, about important cultural norms and relevant current affairs prior to a key leadership engagement.

Culture Shock: Competitors participate in a team-based event where players from each team take turns buzzing in “Family Feud” style to answer cultural and current event questions about the region where their assigned language is spoken.