The Meal Ready to Eat (MRE) has come a long way since its field debut in 1983. Furthermore, the concept of combat rations overall has seen an immense amount of necessary development and change. The MREs of today seem like fine dining in comparison to what was available in the early 1900s, but they still receive their fair share of criticism – hence their popular pseudonyms, “Meals Rejected by Everyone” and “Meals Rarely Edible.” Take a look at how MREs have evolved over time and become a more favored option that is not only ready-to-eat, but also good to eat … well, almost. 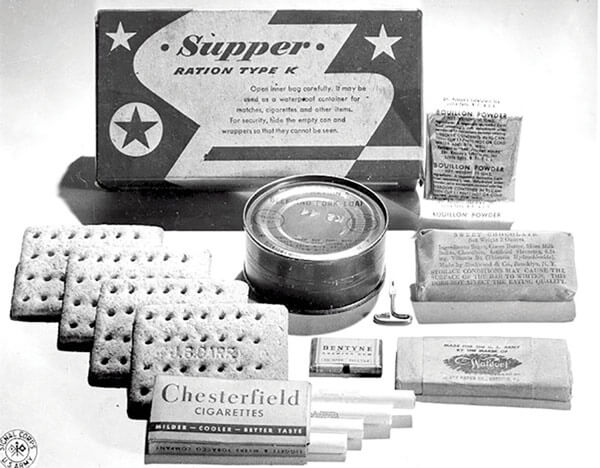 1917 The Reserve Ration: Issued to Soldiers during the latter part of World War I. These consisted of 12 ounces of fresh bacon or one pound of canned meat, two 8-ounce cans of hardtack biscuits, 1.16 ounces of ground coffee, 2.4 ounces of granulated sugar and .16 ounces of salt.

1958 The Meal, Combat, Individual (MCI): Consisted of canned wet rations, including 12 menus, averaging 1,200 calories each. Despite being widely disliked by Soldiers, the MCI remained for almost two decades.

1975 The MRE was adopted as the Department of Defense combat ration, followed by large-scale production tests.

1983 The MRE enters the field. Entrées included beef stew, meatballs with BBQ sauce and frankfurters (also called the “four fingers of death”). While MREs showed major improvements in nutrition and portability, the taste and texture were still unpopular.

1988 After a series of field tests, significant changes were made to MREs. They replaced 9 of the 12 entrées and increased the entrée size from 5 ounces to 8 ounces. Cold beverage bases were added to all 12 entrées, while candy and hot sauce were added to 4 entrées.

1992 The flameless ration heater was introduced to increase the calorie intake of Soldiers in the field. Meals included spaghetti with meat sauce and corned beef hash.

1994 Images were added to make MRE packaging more appealing and user-friendly. Biodegradable materials were introduced for nonedible items like napkins and spoons.

1996 MREs for special diets, like vegetarian, were introduced, which helped increase calorie intake for Soldiers. Menu count was increased to 16 items, including ham slices and chili.

2006 Beverage bags were introduced to MREs.

2017 Service members now have a variety of MRE options and can choose from up to 24 different entrées, including chicken burrito bowls, and more than 150 additional items like brownies and candies. 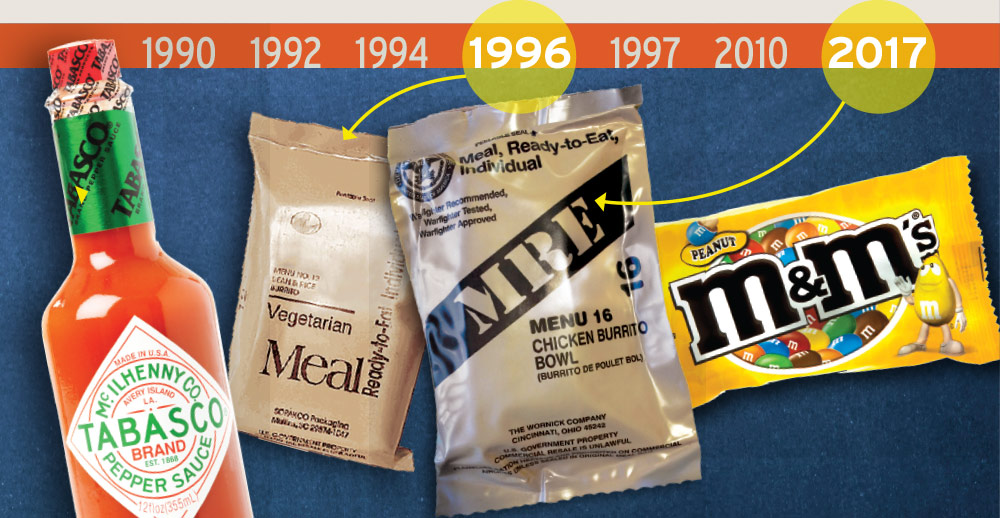