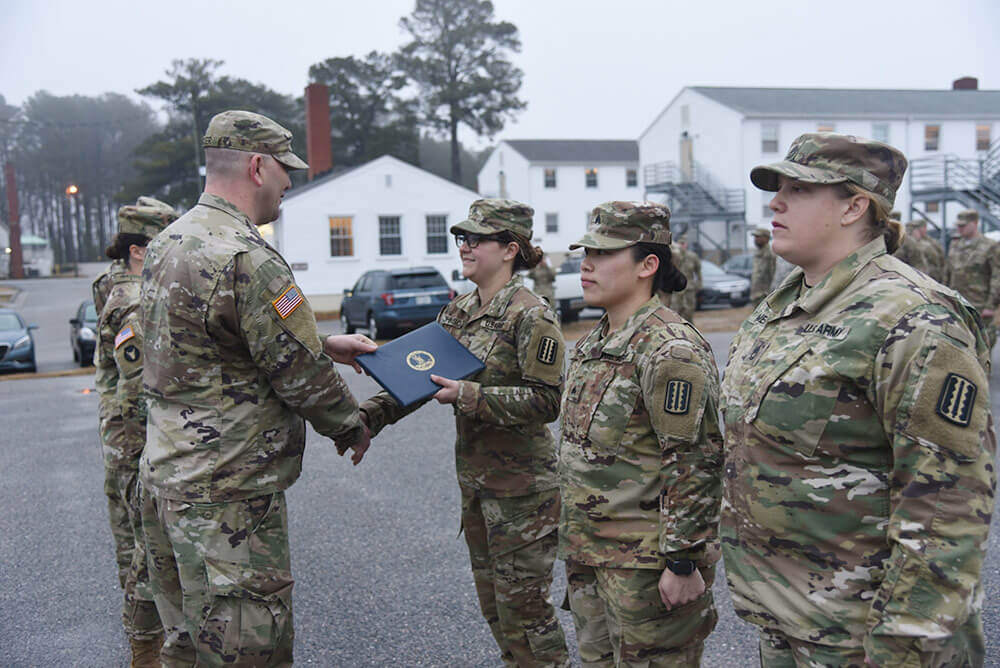 “If I’d been anywhere else, I probably would never have made it,” SFC Johnson said.

Less than a week after his collapse, on Aug. 2, 2018, doctors performed open heart surgery on SFC Johnson to repair the damage to his heart. By October, he was back at work, back with his unit and, a few months after that, on March 10, 2019, SFC Johnson was standing in formation when SFC Homer, SGT So and SGT Johnson were recognized for their life-saving efforts.

SFC Johnson doesn’t remember much from that day, just that he was playing basketball with his Soldiers right before lunch. The area they were in was small, he said – they weren’t even running, but he felt like he could not breathe.

“Y’all hang on a second, let me catch my breath,” he said.

A few feet away, SGT So was watching. SFC Johnson just didn’t look right, she said, so she kept her eye on him.

“The next thing I knew, he was collapsing,” SGT So said. She was just a few feet away when it happened and immediately ran toward SFC Johnson, trying to catch him before he fell to prevent further injury. “Then he was unconscious,” she said.

SGT So tried to get SFC Johnson to respond. She’s CPR and first aid-certified, has even worked as a CPR instructor, so she knew what to do. She tried talking to him, she rubbed her knuckles along his sternum, tried to get a response, but nothing worked.

“His eyes were fixed wide open, he wasn’t breathing and his whole torso started turning white and his neck, up to his ears, started turning blue,” SFC Homer said. Fortunately, she had just completed Combat Lifesaver Training and was able to assist SGT So in giving CPR to SFC Johnson.

“We kept going, rotation after rotation,” SFC Homer said. “I was giving the breaths and she was doing the compressions.” Minutes in, SGT So started to tire and SGT Johnson jumped in for a few rounds.

“That fresh push, just all of a sudden, the color came back,” SFC Homer said.

After six minutes of chest compressions and rescue breaths, SFC Johnson started breathing again, his rescuers found a pulse and he woke up.

SFC Johnson was diagnosed with a bicuspid aortic valve. The aortic valve regulates the flow of blood from the heart into the aorta; a normal aortic valve has three leaflets, but SFC Johnson’s only had two. He had deployed three times, spent years in the military and never had a single heart issue before that day.

“Every doctor I saw said I should have never got up, that based on the condition that I had and what happened, that they never should have been able to revive me with regular CPR,” said SFC Johnson, who has made some changes since the summer. “I had to quit smoking, I’ve changed my whole diet, I started going back to church like I should,” he said. “It definitely changed my outlook.”

Both SFC Homer and SGT So stressed the importance of learning basic first aid and CPR.