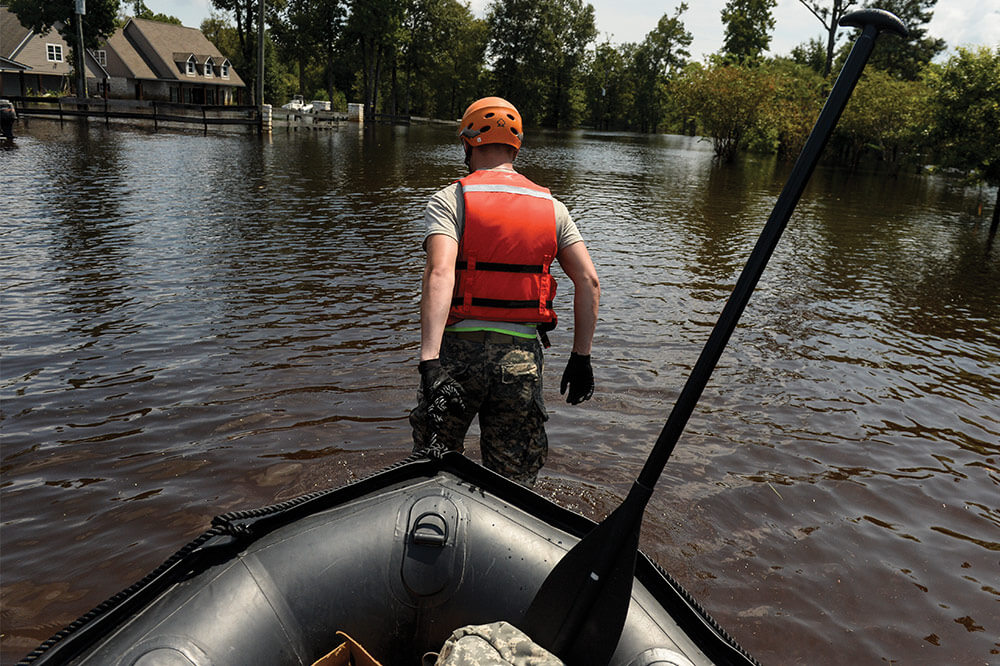 The summer of 2017 ended in a wave of destruction with deadly hurricanes wreaking havoc on the United States. Hurricanes Harvey and Irma, two record-breaking storms, brought catastrophic damage to the coastal United States and U.S. Territories in the Caribbean.

Over 40,000 Army National Guard Soldiers were deployed to assist in relief efforts, including evacuation, search, rescue and recovery missions. With just days between Harvey and Irma’s landfall, Soldiers of the National Guard proved, once again, that when disaster strikes they are Always Ready, Always There.

130-mph winds. Over 51 inches of rain. More than 80 confirmed fatalities. These are the numbers that characterized Hurricane Harvey, a catastrophic tropical cyclone that made landfall in Texas on Aug. 26, 2017. Along with those devastating numbers was another figure: 24,000. That is the number of National Guard Soldiers who deployed in response to Hurricane Harvey to carry out relief efforts.

This number includes the entire Texas National Guard force – of approximately 12,000 Soldiers – that Texas Governor Greg Abbott activated to assist with search, rescue and recovery efforts along the Gulf Coast. COL Steven Metze, public affairs officer for the Texas Military Department, said they had not deployed this many people since World War I.

Harvey made landfall near Rockport, Texas, as a Category 4 hurricane and became the most powerful storm to hit the mainland United States in over a decade. Harvey also set a new record for the heaviest rainfall from a hurricane or tropical storm in the continental United States. After making landfall in Texas, Harvey continued on its destructive path, tearing into southern States for almost a week.

After its initial hit, the storm spun offshore then circled back and made landfall again. This second hit brought downpours to not only Texas, but also Louisiana, Arkansas, Mississippi, Tennessee and Kentucky. With a hurricane of this magnitude, the response was crucial to the relief of the affected areas and civilians. The Army National Guard was ready for the long-term challenge of tackling the destruction Harvey left behind.

Houston received the worst of Harvey’s force, making it a large focus of the National Guard’s response. The city experienced an immense amount of flooding that left approximately one-third of the Houston area covered in water.

Air Force Gen Joseph Lengyel, Chief of the National Guard Bureau, told the Houston Chronicle that it would be “a big undertaking,” noting the 24,000 Guard troops who would be assisting in the response to Harvey. At a Pentagon press briefing, Air Force Maj Gen James C. Witham, the National Guard Bureau’s Director of Domestic Operations, stated, “Our response to this hurricane has been different than anything we’ve experienced before, and we expect it to be much longer in the response phase in terms of what we would normally see with a hurricane.”

When the calls came, Guard Soldiers were at the ready. With a brave sense of selflessness, they began providing relief and recovery to civilians and communities affected by Harvey.

“We were ready to respond in 48 hours,” said 1SG Chris Pearson with the Arkansas Army National Guard. “This was an eye-opening experience for Soldiers. I’m very proud of our unit.”

“We did a lot of good,” said SGT Jason Cameron with the 72nd Infantry Brigade Combat Team. “We were able to help those in need.”

When responding to the hurricane, the Guard initially worked with first responders and later transitioned to supportive roles. Soldiers conducted many missions, including performing evacuations, water rescues, refueling operations and setting up distribution pods to provide food, water and supplies.

“Our readiness is phenomenal,” CPT Jeremy Searless with the 72nd Infantry Brigade Combat Team said. “We set up a triage tent jointly with the Air National Guard. We saw a lot of the population around the clock. We had doctors, nurses, dentists and an x-ray tech. Some of our medical staff also helped with the search and rescue missions.”

“An engineer battalion linked up with a fire station in Houston,” said SGT Daisy Broker with the 72nd Infantry Brigade Combat Team. “They took [a Light Medium Tactical Vehicle] and rescued 53 citizens in very high flood waters. These were a major asset because local agencies could not get their vehicles out.”

“We were with the fire department for almost four days,” SGT Noah Balderas with the 72nd Infantry Brigade Combat Team said. “We helped extract people who were trapped and helped with 911 calls. We had a unique opportunity to show compassion to our local community. The reactions and expressions of gratitude and relief are great.”

Soldiers faced some challenges while responding to Harvey.

“Initially, a lot of logistics were hindered,” said SGT Broker. “Conditions were really rough, and it was cold and rainy.”

However, Soldiers were able to overcome hindrances in order to complete their missions. When floodwaters led to vehicle malfunctions, members of the community were there to offer assistance.

“Once we got to Beaumont, we were having a lot of vehicle issues due to the water,” said SPC Tiffany Brown. “Local shop owners opened their businesses to assist the mechanics. They provided meals even though we refused to take food from them in their time of need. They inspired us.”

From saving families from their flooded homes, to airdropping thousands of pounds of food and water to stranded people and animals, to simply being someone to talk to during a time of need, Soldiers from the Army National Guard provided comfort to those impacted by Harvey’s wrath.

“Some Soldiers didn’t want to take a break,” 1SG Johnny Salenas with the 72nd Infantry Brigade Combat Team said. “They wanted to keep going. We have nothing but the best military members here. I would go to combat with any one of them. Seeing these Soldiers get out there reminded me of why I am a Soldier.”

As relief efforts continued in Texas, Army National Guard personnel began to prepare for a new threat – another hurricane that would make landfall just two weeks after Hurricane Harvey. This time, it was the eastern coast of the country that was in danger.

Hurricane Irma, yet another record-breaking storm, ravaged the Caribbean and the Florida Keys, becoming a Category 5 hurricane with peak winds of 185 mph. Irma was recorded as the strongest hurricane in the history of Atlantic Ocean storms and caused officials to call states of emergency for Puerto Rico, Florida, Georgia, South Carolina, North Carolina and Virginia.

Even before the storm made landfall, Army National Guard members from numerous states were preparing for the impending damage Irma’s unclear path would cause. When preparing for Irma’s landfall, the Army committed 740 trucks, 38 aircraft and 80 generators to relief efforts. An additional 600 generators, 150 boats and almost 3,200 trucks were put on standby to support relief efforts when needed.

The Army National Guard assisted in evacuation efforts before the storm hit and responded to the immense damage Irma left in its track throughout the southeastern United States and U.S. Territories in the Caribbean.

“Among the first of those who responded to the [9/11] attacks in New York City were members of the National Guard,” Air Force Maj Gen Donald P. Dunbar, Wisconsin’s adjutant general, said. “Since that day, the National Guard has shown that it is ready and capable of meeting our Nation’s needs at home and abroad. Today, as we help our fellow citizens in Florida recover from a natural disaster, is no different.”

Florida Governor Rick Scott issued a state of emergency on Labor Day – six days before the storm made landfall – anticipating Irma’s destruction to the State. The following day, he began deploying members of the Florida National Guard. On Sept. 6, approximately 1,000 Guard members were activated, and the remaining Soldiers of the Florida National Guard were activated by Sept. 8.

Irma made landfall on Sept. 10 in the Florida Keys as a Category 4 hurricane with winds of 130 mph. The hurricane caused massive damage and led to at least 80 deaths throughout the Caribbean and the United States. While States as far north as Georgia and as far west as Mississippi felt the impact of Irma, Florida was hit the hardest. Some Florida Army National Guard Soldiers were assigned to help victims in the Soldiers’ own neighborhoods and communities.

“About 80 percent of our Soldiers didn’t have power back home,” said SSG Jesse Powell with the 3-116th Forward Support Company. “[But] we were happy to be serving the Florida community.”

“These men and women are putting themselves in harm’s way to save the lives of their fellow Floridians while many of their own Families are evacuating,” Governor Scott said. “I am proud of their commitment to keeping our families safe.”

Guard Soldiers assisted in relief efforts by providing shelter support, setting up distribution pods and responding to emergencies in real time. Soldiers worked alongside local paramedics to secure and transport injured civilians to emergency rooms. As shelters and emergency rooms filled, Soldiers and paramedics devised plans for the best methods to transfer people to the appropriate level of care. SSG Powell recalls working with paramedics to transport civilians. “Everyone handled the pressure well,” said SSG Powell. “We worked together and had a plan. We were just happy to get people to facilities that were still taking people in as the storm moved closer.”

SGT Kim Leonard, with the 3-116th Forward Support Company, said she used the communications skills she developed while serving as an MP to assure civilians that they were safe and that the National Guard would be there to help.

“Our first mission was in an Orlando community comprised of the elderly,” said SGT Leonard. “Our job was to make everyone feel safe. My communications skills as an MP definitely came into play in keeping everyone calm.”

Whether helping to provide shelter, emergency transportation, or simply a sense of safety, the unwavering presence of the Army National Guard brought hope to the communities dealing with the effects of Irma.

“Some people could not bathe or change clothes and didn’t even have shoes on when they came to the shelter,” said SPC Kenneth Anthony of the 3-265th Air Defense Artillery. “We made sure everyone was comfortable and safe. On our last night, we got with the cafeteria, passed out cookies and let everyone know we were there to help. I was glad to put a smile on someone’s face despite the storm brewing around us.” 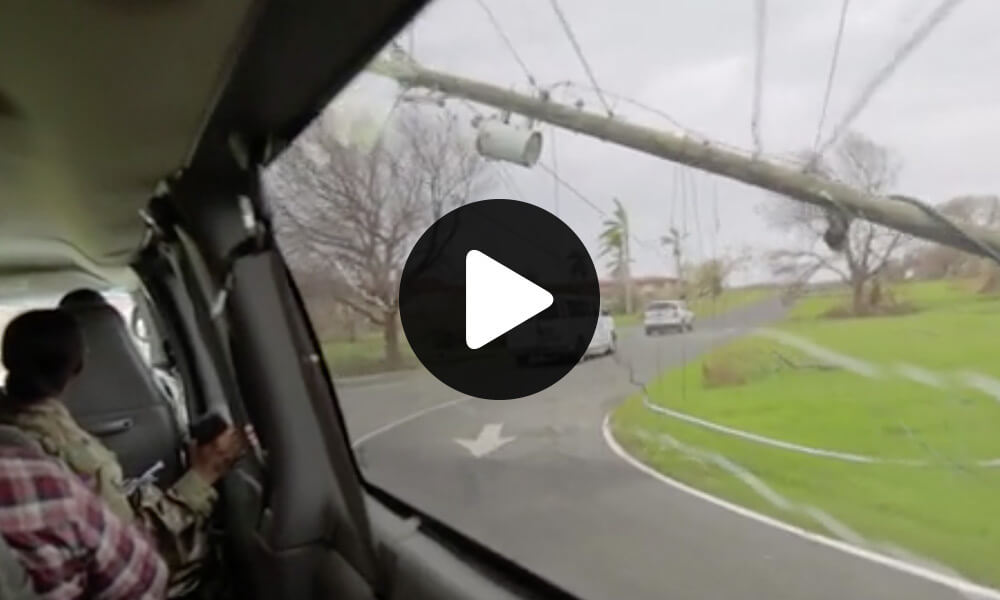