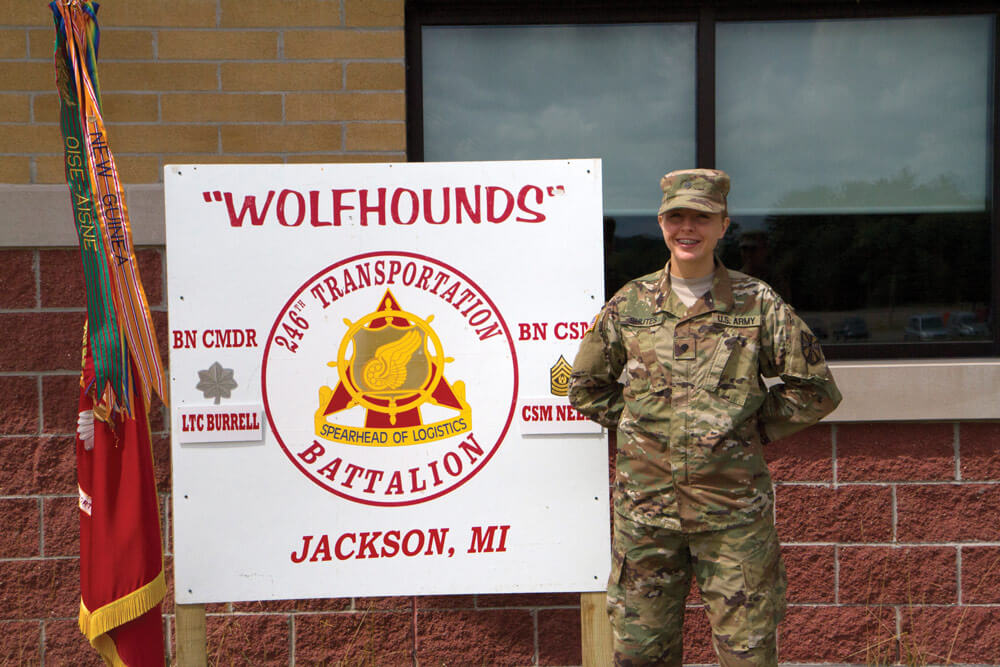 From being one of the first three women in the state of Michigan to complete the Soldier of the Year competition in its entirety, to running marathons in her spare time, it seems there’s nothing SPC Anna Shutes can’t do.

SPC Shutes enlisted into the Michigan Army National Guard in August of 2013 and has spent her career as a Human Resources Specialist, impressing everyone she’s worked with at the 246th Transportation Battalion. 2LT Alex Kraft says,

“As a brand new Second Lieutenant coming into a totally new branch, it’s really reassuring for me to have Soldiers like SPC Shutes on my team. She’s always looking for things she can accomplish as well as ways to improve herself both as a leader and a Soldier. She has done great things for this organization so far.”

In 2015, SPC Shutes participated in the Governor’s Twenty. This was her first experience outside of drill and her first opportunity to spend time at Camp Grayling. “It is what motivated me to increase my level of involvement in the Guard,” she said.

SPC Shutes has gone above and beyond the standard in every aspect of her career and is being rewarded for her hard work. This year, SPC Shutes was awarded the Rasmus Hanson Award, which is given once a year to the most outstanding Soldier in the Michigan Army National Guard who holds the rank of specialist/corporal up to staff sergeant. Mr. Hanson donated the original piece of land that is now known as Camp Grayling and, in tribute, the Michigan Army National Guard selects a Soldier to receive the award every year. Nominees are reviewed by a board of senior NCOs and officers to assess the nominee’s contributions to their community and the National Guard.

During Northern Strike 17, SPC Shutes supported the subordinate units of the 246th with their Human Resources needs. She also put together storyboards and took pictures to show off the accomplishments of the units in support of Northern Strike.

When SPC Shutes isn’t with the Guard, she works at PNC Bank in Kalamazoo and is a Nursing student at Kalamazoo Valley Community College. She spends most of her free time either running or at the gym.