When 25,000 Soldiers from over 20 different nations come together for one mission, one might expect difficulties to arise. From language barriers to varying learning tactics, there are many challenges for Soldiers. But at the annual Saber Guardian training exercise, Guard Soldiers thrived in the high-intensity, multinational environment.

This summer, over 25,000 military personnel from 22 countries participated in Saber Guardian, the largest of 18 training exercises held in the Black Sea Region. The training exercise included 14,000 Soldiers hailing from Army National Guard units from around the country working alongside active duty Soldiers in various exercises throughout Bulgaria, Hungary and Romania.

Saber Guardian was co-hosted by the Bulgarian, Hungarian and Romanian land force components. Held since 2013, Saber Guardian assures U.S. allies and partners of our commitment to the collective defense and prosperity of the Black Sea Region. Many prepared for the exercise by training online, as well as readying equipment and their state of mind.

“I started preparing for this mission late 2015 at our annual training held in Indiana,” said Georgia Army National Guard Fire Support Specialist SPC Christopher Gyening. “I learned a lot from my leadership; I feel like I have one of the best sections!”

For Georgia Army National Guard Human Resource Specialist SFC Cashina Smith, being personally prepared, along with helping to prepare fellow Soldiers, was a crucial part of her training for Saber Guardian. After receiving intel and training in 2015, SFC Smith felt ready for the exercise.

“I had to prepare myself mentally, but more so I was making sure Soldiers were prepared,” SFC Smith said. “We did get photos of Romania from our S1 section [Advanced Echelon] so we knew what to expect. Our annual training in 2015 at Camp Atterbury was a big part of the preparation.”

Saber Guardian consisted of a command post exercise, computer-assisted exercise, an air defense artillery live fire exercise, several river crossings and a mass casualty exercise. Thanks to the preparation, training and their ability to work together, the Soldiers successfully executed their missions.

“We were responsible for making sure there was a river crossing,” said Specialist Abdoulaye Sidibe, who is a Chemical, Biological, Radiological, Nuclear and Explosives (CBRNE) Specialist. “The mission was complete.”

The exercise was significant in its ability to bring together military personnel from different nations and skill sets over a common goal.

“It was awesome to be a part of it [Saber Guardian 2017]. We represented the Guard very well.”

One might think Soldiers would find it difficult to work simultaneously with military personnel from various cultures. However, many were impressed by their ability to work together.

“This group was better than anything I’ve ever experienced before,” SSG Robinson said. “They requested information and they asked a lot of questions.”

SSG Robinson loved being surrounded by diverse cultures and different locals. Soldiers had the opportunity to go into town for a meet and greet, which turned out to be SSG Robinson’s favorite moment.

“We got the opportunity to go into the town and meet people [while] wearing our civilian clothes,” SSG Robinson said. “You had everybody from all walks of life wanting to take a picture with you just because you are military. People were everywhere. It was a huge crowd of all ages, and they just loved us.”

SSG Robinson stated he was unsure how the locals and other Soldiers would react to their presence. He was pleasantly surprised by the warm welcome they received.

“Every army we worked with was happy to have us there,” SSG Robinson said. “I didn’t expect that upfront, to tell you the truth. From the youngest kid to the oldest person, they were so happy to see us.”

For many of the individual Soldiers, training in Europe was a first-time and potentially once-in-a-lifetime experience.

“It’s just a great opportunity to do something that you probably wouldn’t be able to do on your own dime and on your own time,” Public Affairs SFC Helen Miller, with the 46th MP Command, said. “To get away for a whole month and do this type of training just isn’t something everybody gets to do. I am just glad we are able to do these types of things.”

It was an especially unique opportunity for Guard Soldiers, as they do not often get the chance to participate in long-term exercises overseas.

“For the 648th, it provided the first MEB to participate in this type of exercise in this type of environment,” COL John Gentry, Georgia Army National Guard 648th MEB Brigade Commander, said. “No MEB has had that opportunity until now.”

The exercise was the first time SPC Sidibe had left the country, and he highly recommends the experience.

“It was a very interesting feeling,” SPC Sidibe said. “I would do it again. I would tell any Soldier to go and experience another culture.”

Exercises like Saber Guardian open up opportunities for Soldiers to develop their skills and themselves. Some Soldiers were pleasantly surprised by the incredible experiences the exercise provided.

“At first, I didn’t want to go, but I’m glad I did,” SSG Robinson said. “I learned how to do other people’s jobs and learned other systems. We multitasked and we all helped each other. If someone was out or sick, we could cover down. I ended up learning a lot and doing other jobs that weren’t my own. It was amazing.”

“One of my favorite aspects was getting to know new Soldiers,” SFC Miller said. “Just learning how they do things differently than we do and saying ‘oh maybe that’s a better way of doing it’ or they would say the same to us. That’s always great.”

The diverse setting of Saber Guardian fostered an environment where Soldiers could learn from and celebrate each other’s differences.

“There were so many nations in one area, from Macedonian, Latvian, U.S. Active Army and National Guard,” SFC Miller said. “Everyone was just happy to be there and happy to work and train together. Everyone has the same vision and the same focus. Language is not an issue. We make it work. And you would be amazed at how others learn English so well. Soldiers from other nations end up learning English because of these exercises.”

Some Soldiers came out of the experience feeling more connected to the Guard and eager to serve. “Every time I go on these exercises, it renews my faith in the Guard and in the military,” SFC Miller said. “Every time I come back home from one of them, I’m like ‘oh my gosh that was awesome! Let’s do it again! I’ll stay another six years!’ I get renewed energy from going on these types of missions.”

As a Public Affairs Specialist, Saber Guardian served as a way for SFC Miller to dive back into her basic skills and remind herself that she was still capable.

“I’m not an Infantry Soldier, but I sure did a lot of infantry stuff while I was there,” SFC Miller said. “Just being able to get out there and get back to the basic Soldier skills that everybody has to do; you don’t always get to do that when you are just doing your drill weekend.”

Getting back into those basic skills turned out to be a personal challenge for SFC Miller. Though she’s served for over 30 years, she encountered new experiences (like traveling for five days straight with limited sleep and becoming quite familiar with MREs).

“I probably ate more MREs in that month than I have in my entire career,” SFC Miller said. “But that’s what you do when you are on this type of mission.”

According to SFC Miller, it was comforting to know that this was a new experience for many of the other Soldiers as well.

The support and excitement shown by the local civilians proved to be a source of encouragement for many of the Soldiers.

“As you are traveling through these nations in your HMMWVs and convoys, sometimes you’d have to stop or sometimes there was a breakdown. There would be people on the side of the road, families, children, everybody and they were always so happy – waving, wanting a picture and wanting to talk,” SFC Miller said. “They were really happy to just have us there. Those things just make you smile and feel so proud about wearing this uniform and being in the service. You have to sacrifice and leave your Family so this makes you feel really good about what you are doing.”

“Every time I go on these exercises, it renews my faith in the Guard and in the military…”

SPC Gyening compared the experience to being a celebrity after learning the lengths civilians went to just to see Soldiers in action.

For SFC Miller, being able to work beside the Soldiers she usually would just photograph made the exercise even more remarkable.

“I basically was embedded with them,” SFC Miller said. “I wore all the same gear, wore face camo, I did everything they did. But then I was also there to document their story.”

She continued, “I get to make great stories of these Soldiers. When you cover a unit and you come back and give them a video or a slideshow, they get to see themselves. Of course, they want to see that because they don’t have time to take [photos]. They are so happy when they get back and can say ‘oh yeah, we did this’ and they love it.”

Undoubtedly, the most important part of Saber Guardian is the collaboration between the U.S. and its allies. It provides an environment where the U.S. can strengthen relationships with our allies and partners while allowing Soldiers to witness the collaboration firsthand.

“These kinds of things are just so important to build relationships with the other Soldiers and nations,” SFC Miller said. “If things happen, we know that we have allies and that they have our backs and we have theirs. Just working with other nations like that, it’s amazing to see how easy it is to make things work because we all have the same goal.”

Opportunities to build camaraderie between U.S. and allied Soldiers were present throughout the exercise. Soldiers had the chance to not only meet their allies, but also to train and learn from them.

“I think it makes the Soldiers feel better when they go and train with them [allies],” SFC Miller said. “So instead of just saying to them ‘oh you have allies,’ they actually get to meet them and work with them. It makes it more personal.”

SFC Smith concluded, “It was awesome to be a part of it [Saber Guardian 2017]. We represented the Guard very well.”

END_OF_DOCUMENT_TOKEN_TO_BE_REPLACED 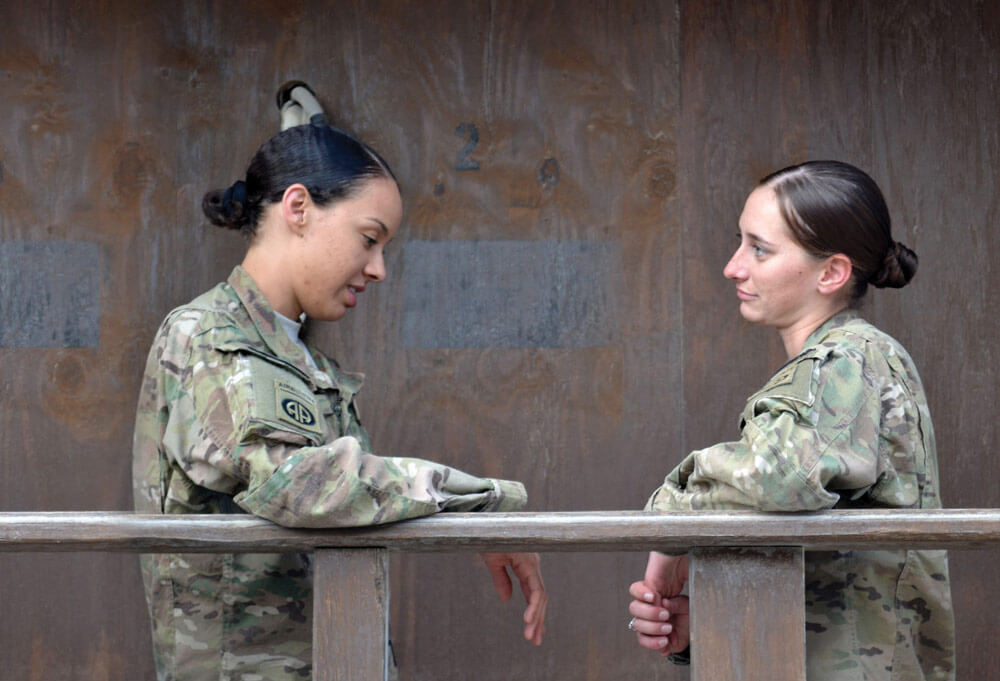