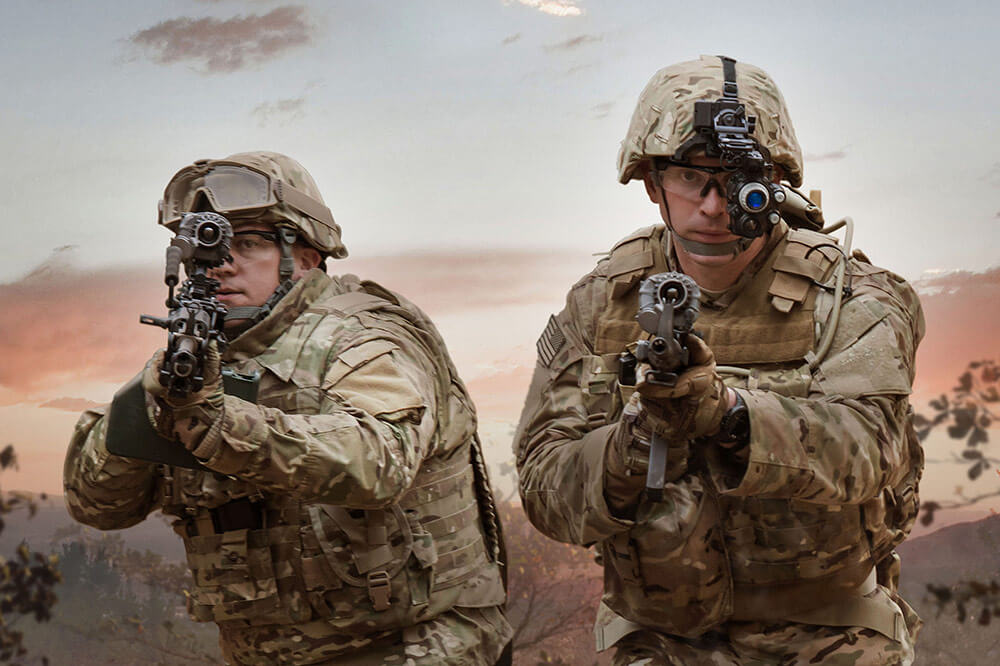 When operating downrange, the ability for Soldiers to quickly and accurately lock onto their targets is crucial. This is especially true in dense urban areas where targets are often obscured by surrounding buildings or objects and during nighttime operations when visibility may be low. 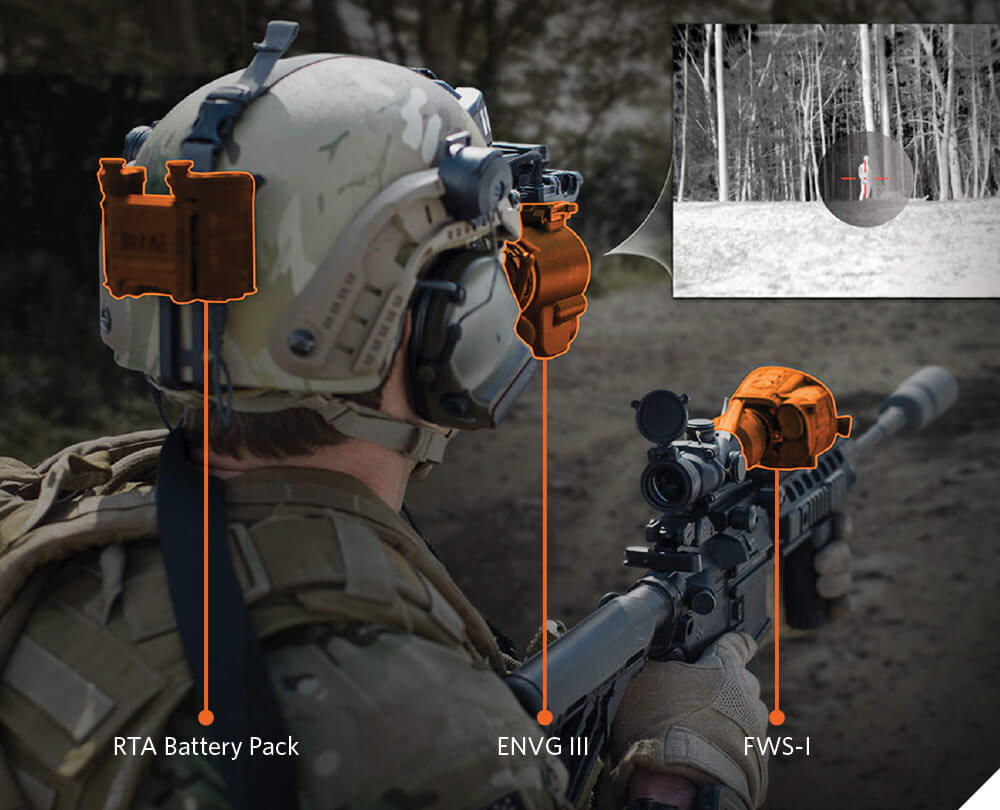 The two technologies currently used to aid in increasing situational awareness – thermal weapon sight for identifying obscured targets, and night vision goggles for vision at night and in low light situations – are being combined by BAE Systems into one revolutionary device.

“I believe in our operational testing our Soldiers were hitting over 75 percent shooting from the hip,” said Joey Jayachandran, senior program manager for the ENVG II/FWS-I system at BAE Systems.

The weapon sight portion of the system, the FSW-I, employs a wireless camera positioned on the rifle that transmits to the goggle real-time images of the object at which the rifle is aimed.

Jayachandran also reported that residual heat signatures are visible with the goggles thermal feature for up to 1.5 minutes after the target has moved, giving Soldiers a heightened sense of when enemy combatants may be in the area. 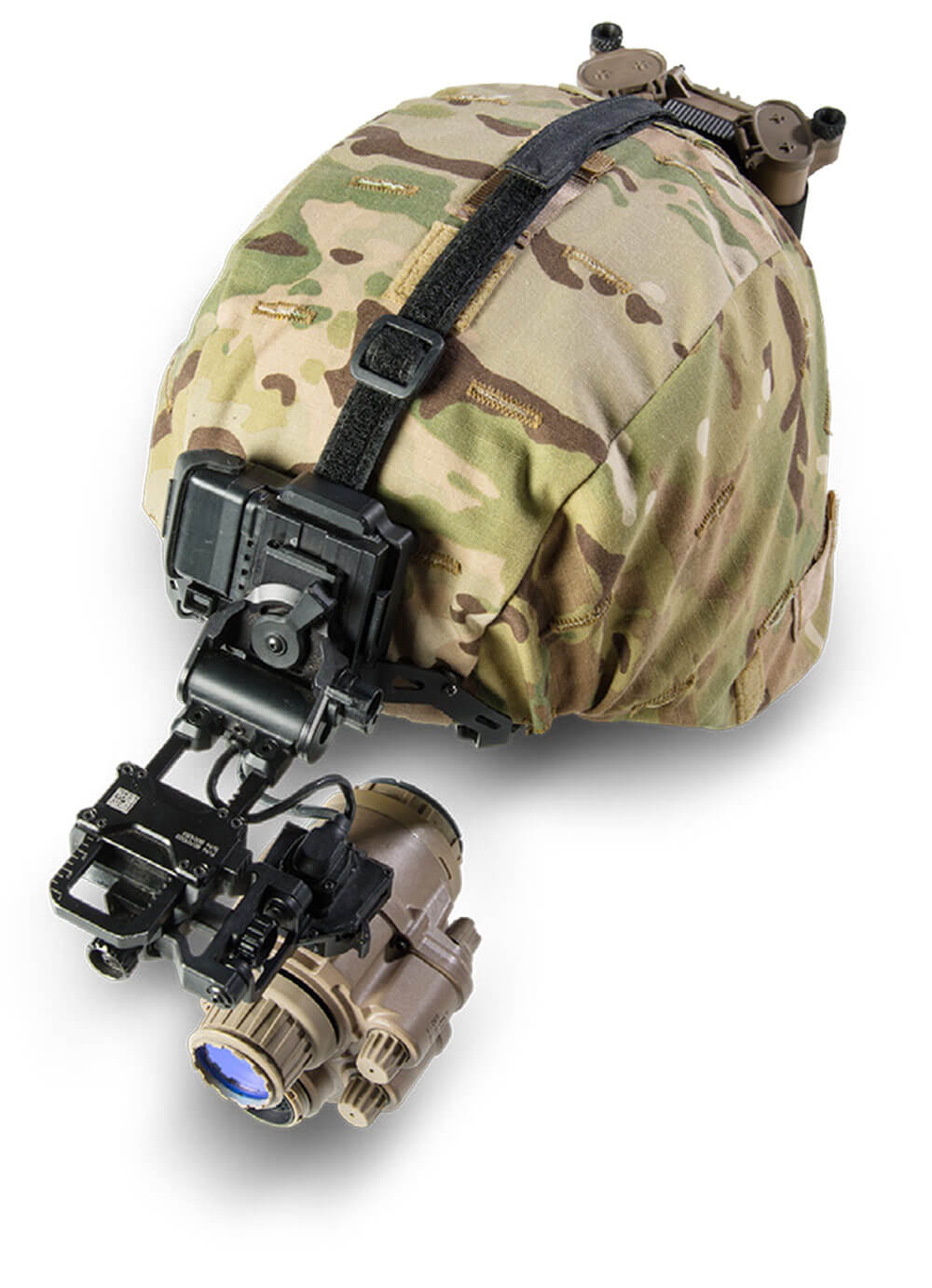 Rapid Target Acquisition technology allows Soldiers to simultaneously display the weapon sight imagery and aim point in the goggle, thus removing the need to shoulder the weapon to aim. Soldiers can locate and engage enemy targets from any location and virtually any position. This feature enables Soldiers to more quickly adapt to challenging terrains, potentially giving them the ability to see and shoot around a corner without being exposed.

“The biggest advantage is it’s a weapons system that helps protect the warfighter,” explained Jayachandran. “[Soldiers] don’t have to expose their head in the line of fire. To aim you can just expose your rifle and your hands around corners in close combat or over an armored vehicle. This is the first time you can actually do that and fire from that same position.”

Additionally, because the FSW-I is provided as a clip-on, there is no need to adjust the site every time it is taken on or off the weapon, said Dave Smialek, director of business development for BAE Systems’ Precision Guidance & Sensing Solutions.

“The capability gap that we were tasked with [closing] by developing this technology was the rapid target acquisition capability,” said LTC Anthony Douglas, product manager for Soldier Maneuver Sensors at Program Executive Office (PEO) Soldier. “We are allowing the Soldier to actually see what is on their weapons sight, saving them time from having to bring the weapon to his eye.”

Soldiers can switch view modes with the simple push of a button. The system provides image overlay, scope-only and picture-in-picture modes, allowing Soldiers to see in their goggles only the image from the ENVG III, only the image from the FWS-I, or a combination of the two with the view from the weapon site camera in a 19-degree bubble that overlaps the main ENVG III image when looking through the goggle. The ENVG III and FWS-I can also be used independently of each other.

Twelve-micron thermal technology provides the goggles with sharp image quality in both the day and night. With the traditional night vision goggles, targets tend to blend into the background. With the ENVG III/FWS-I, targets that may have once been obscured are now fully visible. Dean Kissinger, electronics engineer with PEO Soldier, said that the contrast created by the night vision equipment really causes targets to “pop out.”

“In the case of the goggle, if you look at it compared to the ENVG-II, it’s a significant size and weight improvement, but it’s the dual-sensor capability – the [night vision] and the thermal – that is a big improvement,” noted Smialek.

During a 2017 reliability growth test with the 4th Infantry Division (ID) based at Fort Carson, Colorado, Soldiers rated the thermal imaging as a particularly advantageous feature, as it allowed them to see through smoke when using it.

The new FWS-I comes in at under a pound and is less than half the size of previous versions. BAE Systems engineers reduced the weight by cutting the optic size in half, thus lightening the load Soldiers carry into combat.

The ENVG III/FWS-I system is optimized for minimal power consumption giving it the ability to run longer on a smaller battery. In mild temperatures battery life for the system is 10 hours, while in extreme conditions the battery will run five hours without charging.

MAJ Kevin Smith, assistant product manager for Soldier Maneuver Sensors at PEO Soldier, explained that there is a steep learning curve on the system for most Soldiers.

“We just got through with the tests with the 4th Infantry Division back in June,” he said. “We only spent about 40 hours of in-classroom training, but we also spent about a week on the range or so. That’s where the Soldiers were really starting to get it, understand it and feel it on the range.”

The new night vision mobility and targeting system may have been challenging to grasp at first, but once the Soldiers of the 4th ID got the hang of it, they were generally all-in on the new technology.

“One Soldier, a noncommissioned officer who didn’t like [the system] at first, later asked me, ‘When are we getting this fielded?’” MAJ Smith commented. “He said he wanted it [right away].”

Fielding of both pieces of the ENVG III/FWS-I system is expected to begin in 2019, with dismounted Soldiers being the first in line to receive the new equipment.