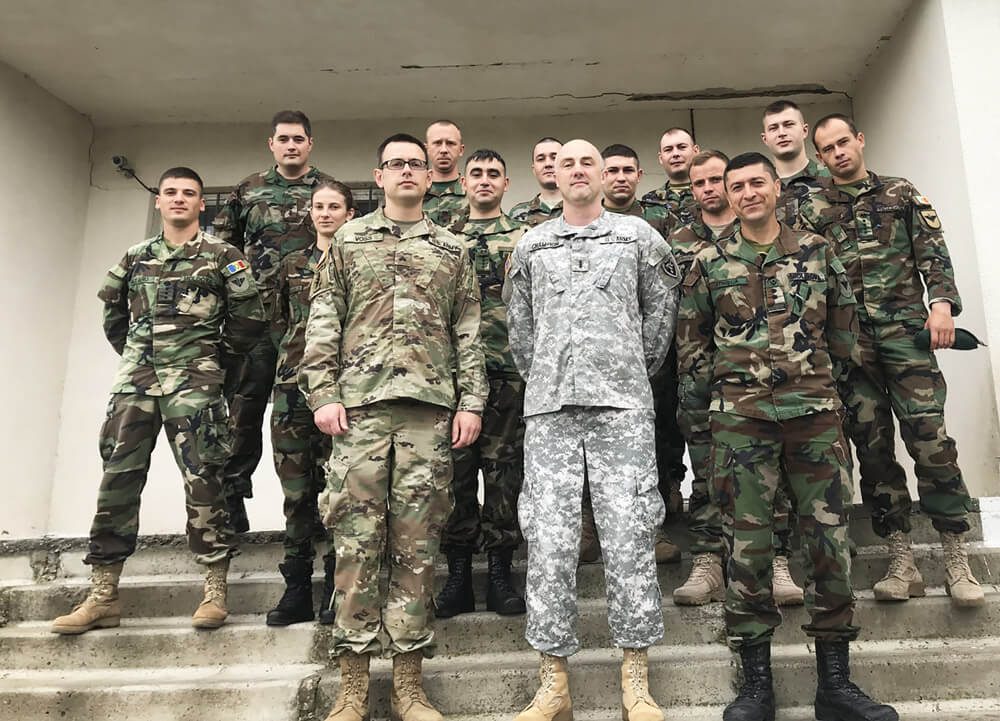 FRONT ROW, FROM LEFT: SGT Jacob Voss and CW4 Donald Champion,, both of the North Carolina National Guard’s Joint Force Headquarters, stand with soldiers of the Moldovan Armed Forces who participated in a cyber defense course taught by CW4 Champion and SGT Voss as part of the National Guard’s State Partnership Program.

“What we’re doing is teaching them how to fish,” said CW4 Donald Champion, senior information systems officer of the North Carolina Army National Guard’s Joint Force Headquarters (JFHQ) as he described the goals of the joint-training initiative.

The nation of Moldova has had more than its share of cyberattacks. With Russia—a country notorious for its use of aggressive cyber warfare—as its neighbor, the tiny nation is under constant threat of attack.

“Just looking at their position, with them being near Russia, they are right in the heart of a large, large cyber threat,” CW4 Champion explained. “So, they are mostly concerned with the government-side threats, but then the business [threats] as well.”

The young nation of Moldova, with a gross domestic product of only $8 billion and a total population of only 3.5 million people, has limited resources to address the problem. Enter the North Carolina Army National Guard. North Carolina is State partners with the nation of Moldova through the National Guard’s State Partnership Program (SPP). The two groups have been partners since 1996, just five years after the country became an independent republic following the dissolution of the Soviet Union in 1991. The North Carolina National Guard has been running this current series of cyber training for the last three years. The July 2018 training was the fourth in a series of trips undertaken by North Carolina Soldiers to help their Eastern European partner stand up a capable cyber defense force.

“We are limited in what we can share with them. Everything has to be open source. So, a lot of what we are doing is teaching them how to fish versus giving them fish for a day. We are there for a couple weeks a year. Then we leave them with a list of resources to use and they take advantage of it,” said CW4 Champion.

He went on to share that what the Moldovan military lacks in resources, it makes up for in its dedication to meeting a challenge.

“They are so hungry for knowledge, and that’s why I continue to volunteer for these exercises,” he said.

A chief information security officer for a research company and a part-time university professor in his civilian career, CW4 Champion speaks as someone who knows what enthusiasm for learning technology looks like. He described the level of motivation displayed by the Moldovans as “encouraging.”

“They pay attention and ask smart questions,” he said. “They come back each day with questions based on the things we talked about the day before. Even out of class, they’re learning and wanting to learn more. Whenever we have an audience that wants to be there, it just makes the whole experience that much easier.”

CW4 Champion and fellow North Carolina JFHQ Soldier SGT Jacob Voss together conducted table-top exercises with 20 of Moldovia’s soldiers. Because the Moldovan National Army is still ramping up its cyber resources, table-top exercises that require only a whiteboard and critical thinking skills have been the preferred training format for the SPP interactions thus far. That is expected to change, though. The Moldovans have plans to procure hardware that will allow them to execute their own hands-on-keyboards exercises. For now, they are making considerable progress using the means currently available, said CW4 Champion.

“It’s good to see that the work that we’ve done on the previous engagements [is] reflected in how they’re progressing,” he said. “Their cyber capabilities now are definitely in a better place than when we started with them three years ago.”

Using the preferred format of whiteboard, table-top exercises, the pair of North Carolina Soldiers kicked off the training with the introduction of a scenario revolving around an email containing malicious coding. That scenario acted as the catalyst for a series of decisions participants were required to make concerning how to react and mitigate the situation including:

“We had this whole mix of managerial and technical pieces that played on to this bigger scenario,” CW4 Champion explained. “It starts off with a simple email, but the scope then expands greatly. You see where they go and sometimes have to nudge them in the right direction if they don’t get there themselves.”

CW4 Champion loosely compared this process to the old “Choose-Your-Own-Adventure” book series, where readers would choose an action for their character to take at the end of a chapter and it would direct them to a page that explained the consequences in the storyline.

CW4 Champion went on to note that the Moldovan teams have learned the basics well enough using this approach, but they expect to accelerate pace and level of training once the Moldovan National Army acquires its new hardware.

“The hardware purchases they just made are going to be a great step for them where they can start to really practice,” CW4 Champion said. “This is definitely a perishable skill. If you are not doing it all the time, you will definitely lose something. Once they get a lab where they can have their guys train a normal cadence, that’s going to help.”

There may also be bigger engagements on the horizon. The North Carolina Army National Guard plans to do two more cyber training events with the Moldovan National Army in 2019. Multinational cyber conferences could also be in the works, where cyber forces from around Eastern Europe will practice, share and perfect training and operational techniques with one another.

CW4 Champion said that ideally the North Carolina Army National Guard would participate in these conferences alongside their State partners, which could enhance interoperability between all the involved nations.

He also noted his enthusiasm for a sustained and productive cyber partnership with Moldova.

“I think it’s only going to continue to grow throughout the years as their capabilities increase and our ability to share what we are doing with them increases as well,” he affirmed.

END_OF_DOCUMENT_TOKEN_TO_BE_REPLACED

When the hacktivist group Hacktovia caused significant disruptions to the World Peace Conference at the Hynes Convention Center in Boston, Massachusetts, Army National Guard Soldiers from the New...