Tennessee Adjutant General MG Terry Haston was stationed near the Berlin Wall in 1989, when the wall came tumbling down. He said his State’s current presence in Eastern Europe is not the same as it was for the American military in 1989, but it serves a similar purpose—to deter Russian aggression.

“I believe that our people are a visual deterrent,” said MG Haston. “Sometimes, a big dog chained up in the backyard has a tendency to keep the burglars away. I think that’s what this deployment is.” 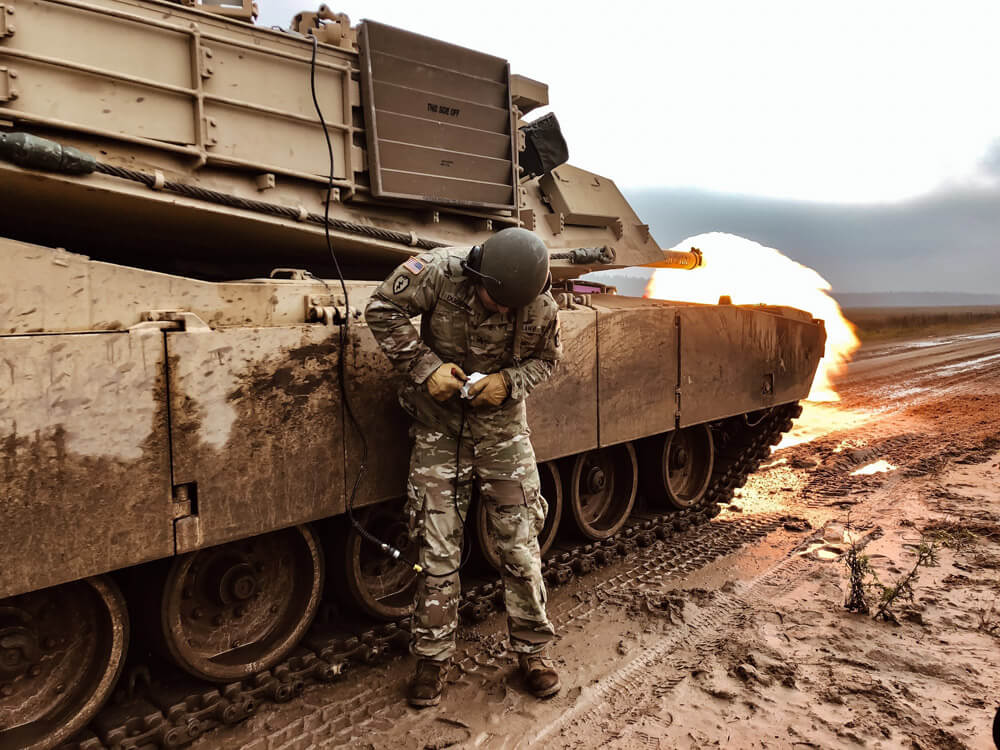 Task Force Raider assumed control of BGPOL in September of 2018. In doing so, the unit is the first U.S. armored task force to provide a military presence along the eastern border of Poland while working under NATO.

“Our presence strengthens the defensive capability within Poland,” said LTC Donny Hebel, commander of the Tennessee Army National Guard’s 2nd Squadron, 278th Armored Cavalry Regiment (Task Force Raider), during an interview with Army reporters, “[It] is evidence of continued U.S. commitment to NATO, as well as to the deterrence of [foreign] aggression. 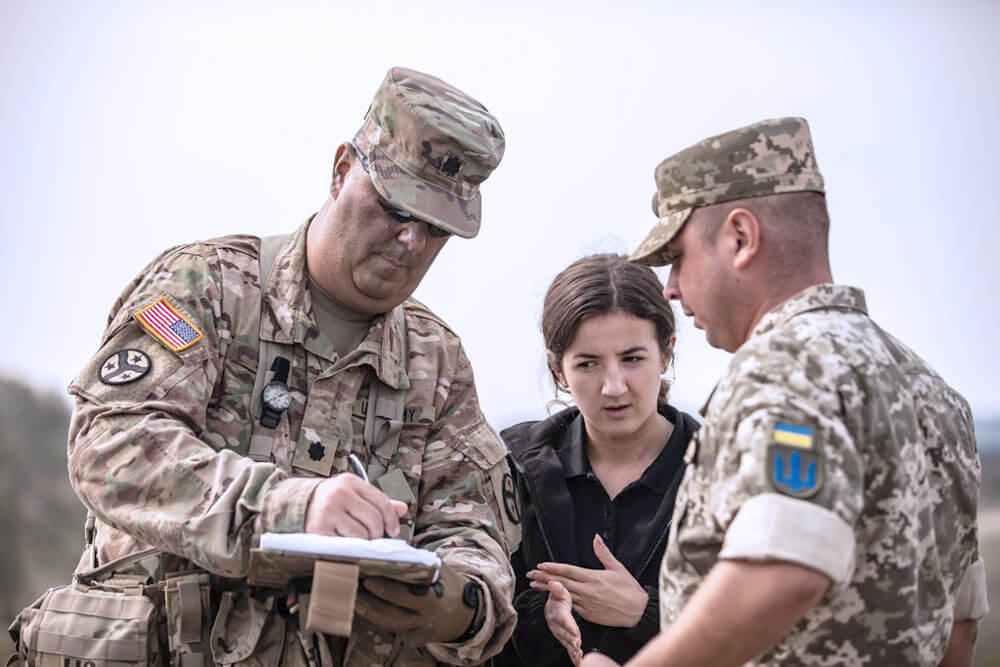 BGPOL is comprised of soldiers from Croatia, Romania, the United Kingdom and the United States, all serving with the Polish 15th Mechanized Brigade as a unified defense and deterrence force in northeast Poland.

“The United States has not had heavy forces this far [into] Europe since November of 1989,” emphasized MG Haston at the 278th’s transition ceremony when they took command of BGPOL last September. “We are bringing a lot of disciplined firepower here to Poland. This mission shows that we have not taken our eye off of our Eastern European allies. We are here in defense and deterrence against Russian provocation; it simply will not be taken lightly.”

Soldiers on the ground offered a similar sentiment when speaking about the deployment. SPC Graham Binkley, a Dismounted Team Leader with Third Platoon, E Company of the 278th, echoed MG Haston’s remarks and noted a secondary objective. 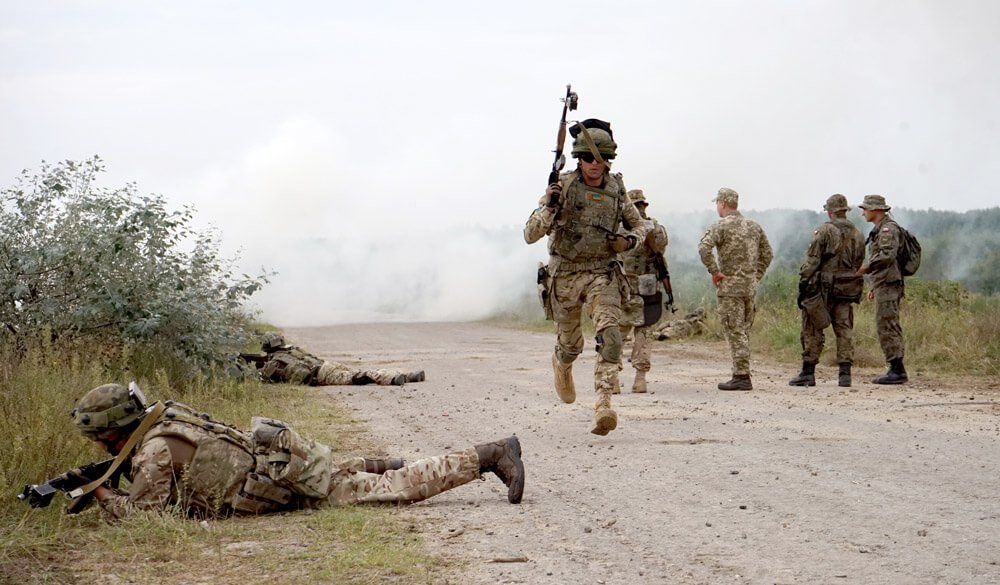 “Our primary mission here is to be a deterrent,” he said. “Unfortunately, it’s difficult to measure what doesn’t happen, but I’m confident our presence makes any potential aggressors think twice. Our secondary mission is to continue to honor our NATO commitment and continue to foster goodwill.”

Increasing interoperability is a major initiative on the agenda. “Every deployment results in not one, but two gains for the Joint Force,” said Chief of the National Guard Bureau Gen Joseph Lengyel during a visit with the 278th last Christmas season at BGPOL. “The obvious gain is the mission gets accomplished. But also, with each deployment, we build readiness and lethality, a key objective of our National Defense Strategy.”

As far as training goes, MG Haston said, it comes close to being an ideal situation. “While they’re training, it’s been a very valuable experience,” he commented. “I’ve talked to several leaders there, and they say this is the best training we’ve ever had. It’s like what Soldiering should be.”

In Ukraine, the 278th is assisting in the military training of Ukrainian forces as part of Joint Multinational Training Group-Ukraine (JMTG-U). This multilateral group is led by the Combat Training Center (CTC) branch, which is comprised of units from Canada, Lithuania, Poland, Ukraine and the United States. JMTG-U is working to build up the training capabilities of the Yavoriv Combat Training Center. Over the years, several Army National Guard units have helped man JMTG-U, including troops from California, New York, Oklahoma and currently, Tennessee.

“All international units stationed in Ukraine are tasked with enhancing the capabilities of the training site, with the purpose of assisting the Ukraine military to create a sustainable training program for combat units,” said the 278th’s 2LT Richard Mayfield, who is serving as a mentor while stationed at the Yavoriv CTC. 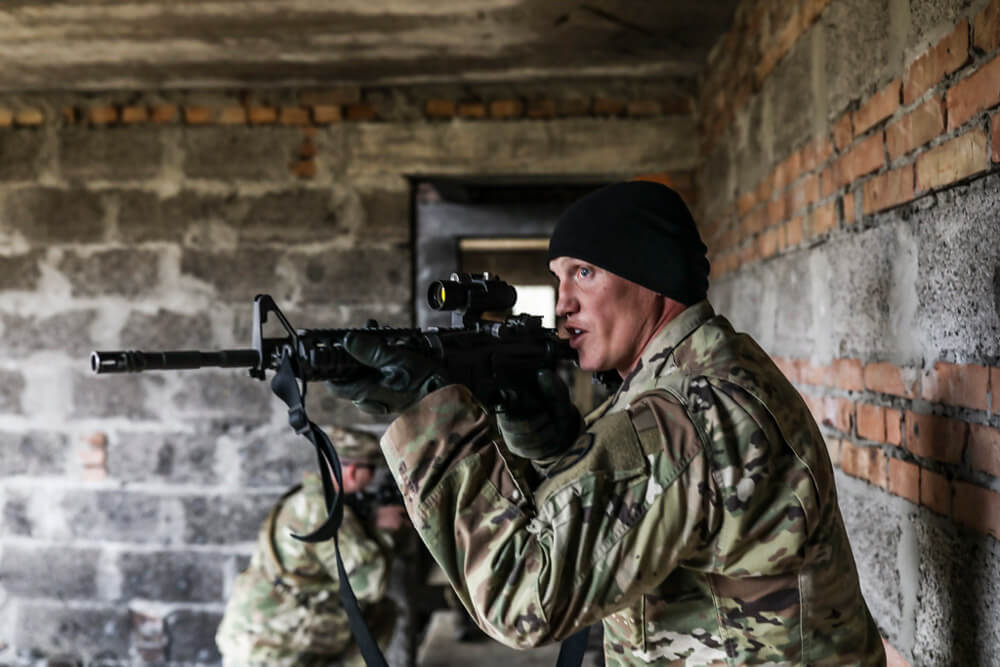 At the CTC, a team of Ukrainian observer controller-trainers (OC-Ts) lead the training of rotational brigades of Ukrainian soldiers. The international Soldiers serve as mentors to the Ukrainian OC-Ts.

“The Ukraine military looks to us as an important support to what they are trying to do. We assist by means of coaching and teaching standards and best practices,” noted 2LT Mayfield. “A lot of our current focus is on troop leading procedures, orders production and military standards. I have always wanted to be in a position to teach and coach, and this is certainly a chance to do that.”

While it may be the U.S. Soldiers who are responsible for the day-to-day training of the OC-Ts, the benefits of the resulting interoperability are as significant for those mentors as they are for the Ukrainian student-Soldiers. 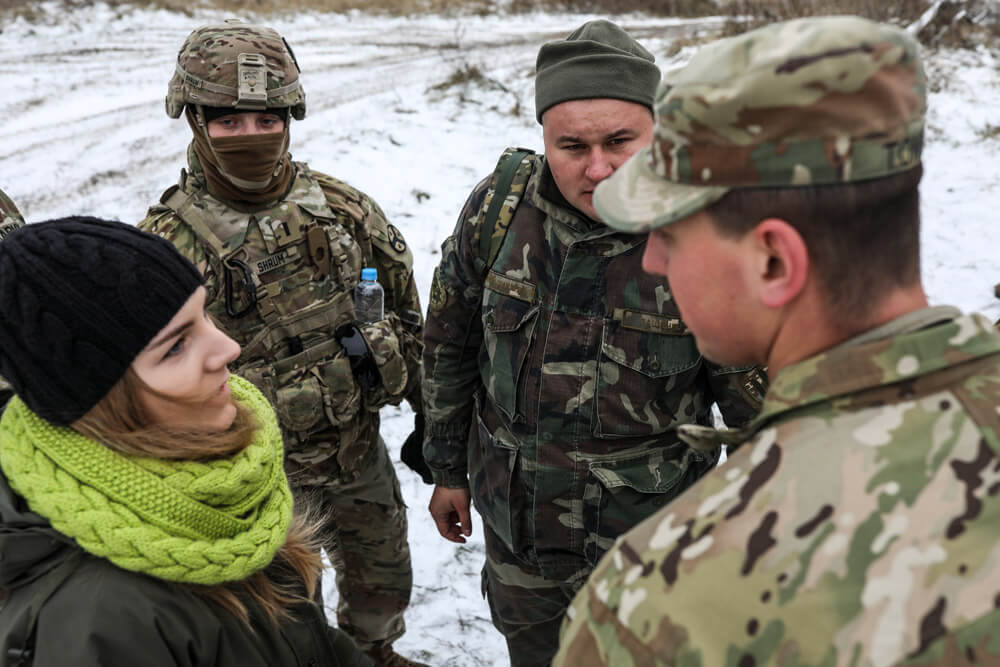 “Whether the Ukrainian OC-Ts are riding atop mechanized vehicles or walking alongside the training units during their tactical movements, you can usually find a U.S. mentor right there with them, regardless of rain, sleet or snow,” said 1LT Logan Shrum of the 278th, who is also assigned as a mentor at the Yavoriv CTC.

“They say that adversity tends to build comradery,” 1LT Shrum continued. “The adverse conditions under which the Ukrainian forces train certainly show that to be true. I consider many of Ukraine’s OC-Ts, whom we work closely with, to be valued friends and partners.”

Last fall, the members of the 278th stationed at the Yavoriv CTC assisted in the multilateral training, Exercise Rapid Trident. Held at the International Peacekeeping and Security Center, also located in Yavoriv, Rapid Trident is an annual, two-week exercise that was created to enhance joint combined interoperability across allied and partner nations of Ukraine. The event primarily concentrates on defensive operations including command post and field training exercises. 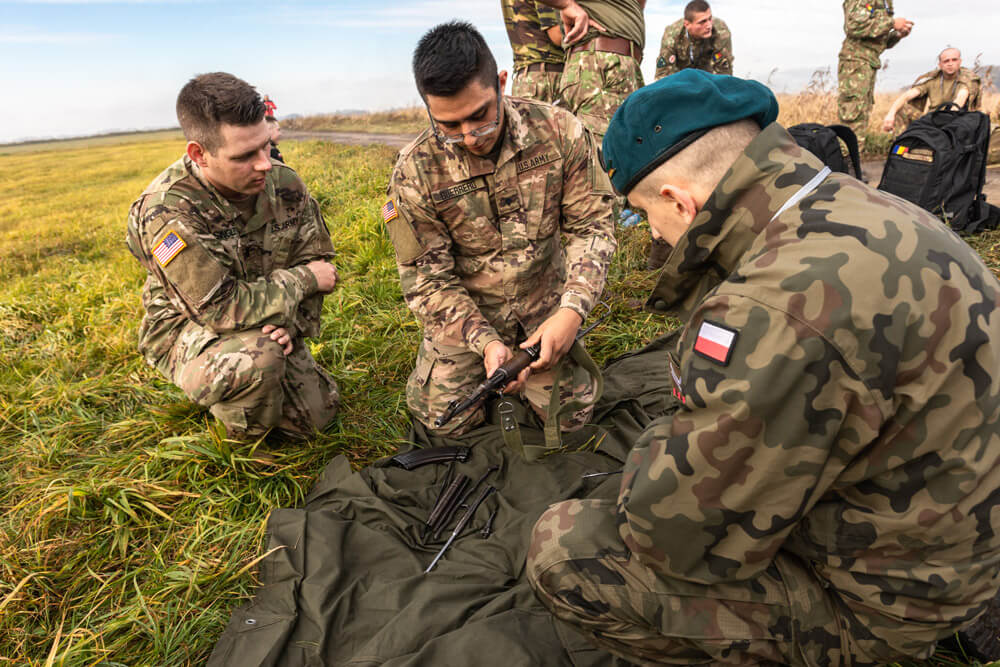 “During the exercise, units will have to overcome the opposing forces, time, the elements and their own tendencies in order to be victorious. In a world of constant conflict, nations are not alone, and Rapid Trident affirms this fact with 13 guest nations participating at all levels of the exercise from opposing forces to instructors and observers.”

Rapid Trident also serves as the validation exercise for Ukrainian units that have completed a rotation at the Yavoriv CTC. During the event, exercises are completed only by the Ukrainian troops who are being observed for validation, while the international troops serve in support roles to include trainers, observers and mentors. The 2018 event hosted 2,200 participants from 14 nations— Azerbaijan, Bulgaria, Canada, Denmark, Georgia, Germany, Lithuania, Moldova, Poland, Romania, Turkey, Ukraine, the United Kingdom and the United States. Training events included a brigade-level computer-assisted command post exercise, situational training lanes and a live-play field training exercise. 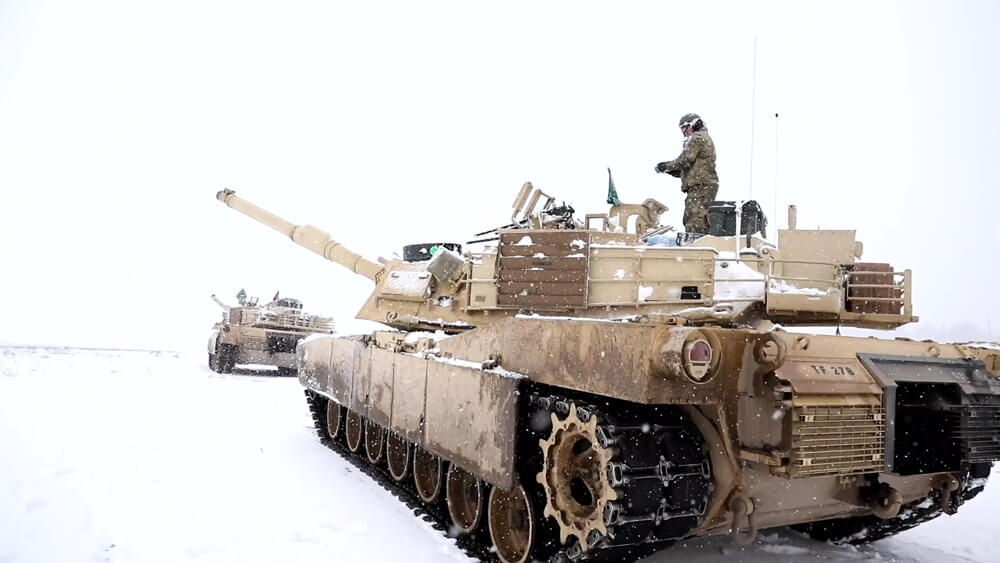 “There is a tremendous amount of benefit for National Guard units to come over to Europe,” said U.S. Army Europe’s Army National Guard Deputy Commanding General MG John Gronski during a visit to the 2018 iteration of Rapid Trident. “First, it’s important to develop those strong relationships with our allies and partners. Second, when National Guard units come to Europe and participate in exercises, they build a tremendous amount of readiness and it gives them an opportunity like no other training area does to train alongside allies and partners.”

The work being done by Tennessee Army National Guard troops as part JMTG-U, BGPOL and at exercises such as Rapid Trident all point to the fact that the United States remains committed to the defense of Eastern Europe. It is a commitment that has existed since World War II and remains strong today. 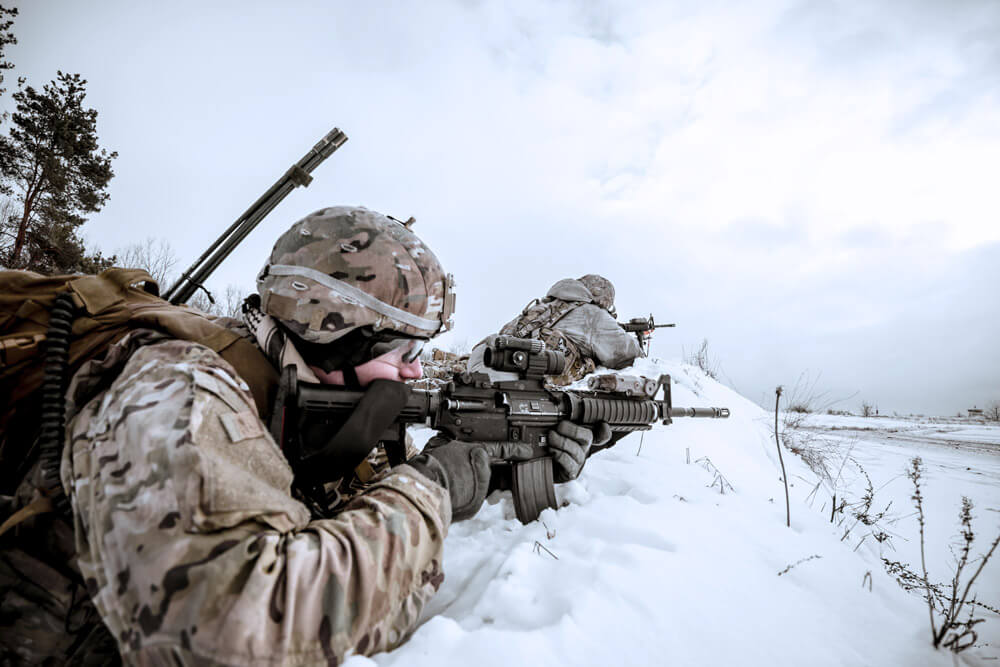 “You can’t pay for the kind of relationships being built soldier-to-soldier right here,” Gen Lengyel said. “This is the kind of exchange that cements enduring partnerships with our allies at the deepest level, through individual relationships at every rank.”