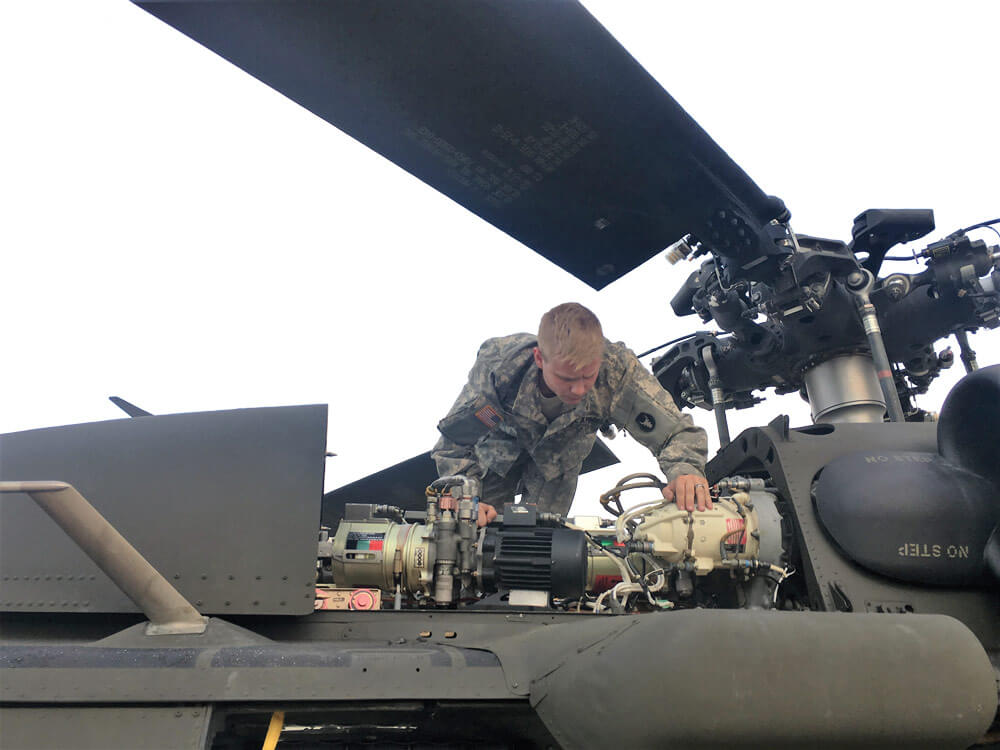 SGT Wilson inspects his aircraft prior to a training flight

Showtime for the flight was scheduled for 1800, and UH-60 A/L Black Hawk crew chief SGT Marcus Wilson is already 30 minutes into his second shift of the day. He is finishing his review of the aircraft’s logbook as the flight’s pilots and other crew chiefs arrive.

SGT Wilson is looking for maintenance faults or anything that could affect the aircraft’s mission. The log keeps track of flight hours, upcoming inspections and scheduled maintenance.

“You don’t want to fly into an inspection,” he says, explaining that he’s reviewing the maintenance schedule and comparing it to the aircraft’s flight hours to ensure an inspection won’t be required during the flight.

He talks briefly with the pilot-in-command of tonight’s flight, CW4 Walker Craig, and the other crew chiefs to discuss that night’s mission and training objectives.

CW4 Craig confirms what tasks must be completed for the crew chiefs to progress.

“I FIGURED IT WAS MY TURN”

SGT Wilson has served in the Idaho Army National Guard for four years. He enlisted three days after his 17th birthday, wasting no time getting started in what he hopes will be at least a 20-year career.

His grandfather was in the U.S. Army and served in Vietnam. “I figured it was my turn,” SGT Wilson says. “I joined because I love my country; I wanted to do my duty.”

Three weeks earlier, SGT Wilson was hired as a federal technician to work full-time as a Black Hawk mechanic. As a technician, he maintains the same helicopters in which he flies as a traditional Idaho Army National Guard Soldier. Though he wears the same uniform for both jobs at Gowen Field, he has two separate positions.

As a crew chief, he must meet semi-annual minimum requirements to stay current on the aircraft. Every six months, SGT Wilson must fly at least 12 hours, including five hours with night vision goggles and an hour of flying unaided (without night vision goggles) at night.

While crew chiefs can come close to reaching their flight hours training requirements during drill weekends, flight crews are allocated additional flight training periods to help them meet the requirements.

Before he got the full-time position, SGT Wilson was largely limited to flying during drill weekends because of the commute from his home in Emmett, Idaho, to Gowen Field. Tonight, he will fly for the third time in as many weeks.

But before he and the rest of the crew can lift off, there’s still a lot of work that must be done on the ground.

SGT Wilson stops by his locker and grabs his flight bag on his way to the helicopter.

“Crew chiefs are responsible for everything back of the pilots’ seats,” he says as he starts to unload the contents of his flight bag onto his seat.

“This is the most expensive piece of equipment I own,” he says, pulling out his flight helmet. He also unloads a pair of gloves and a cable long enough to let him communicate with the crew from outside the aircraft.

SGT Wilson has been a Black Hawk crew chief for almost a year. He was an AH-64D Apache Longbow crew chief before the 1-183rd Aviation Regiment (Assault Battalion) transitioned to Black Hawks in 2016. SGT Wilson prefers the Black Hawk over the Apache for a simple reason. “I actually get to fly now,” he says.

Apaches have just two seats, with room only for the pilots. Black Hawks hold two pilots, two crew chiefs and up to 11 passengers.

“There definitely has to be unit cohesion,” SGT Wilson says. “Pilots don’t see the sling load. That’s all on the crew chiefs to put the helicopter where it needs to be.”

SGT Gilman joins SGT Wilson a few minutes later to assist him with getting the aircraft ready to fly. He’s brought the crew’s night vision goggles and radios. They load the equipment and run through the pre-flight checklist together.

Weather caused earlier flights to be canceled, so it’s the aircraft’s first flight of the day. Everything must be inspected, and SGT Gilman takes extra care to make sure the windshields are clean so dust isn’t magnified through the crew’s night vision goggles.

The pilots walk out to the Black Hawk as the crew chiefs finish their inspections. They are joined by SGT Tom Barber, the crew chief flight instructor for the flight. He will oversee SGT Wilson’s and SGT Gilman’s progression to Readiness Level II.

The three crew chiefs are the same rank, but rank doesn’t matter in the aircraft. Experience and qualification levels determine the crew’s roles and responsibilities, and when it comes to safety, everyone is on equal ground.

“If anyone is uncomfortable with something that is happening during the flight, then they can ask that it stop – and we are supposed to stop doing whatever we are doing,” SGT Wilson says.

CW4 Craig and the flight’s other pilot, CW2 Thomas Budge, perform their own pre-flight check on the aircraft. While the crew chiefs wait, SGT Barber instructs SGT Gilman to brief the flight’s passenger.

When the pilots finish their check, CW4 Craig runs the pre-flight crew brief. He spot-checks the crew while offering his own insight as he makes his way through his checklist. Drawing from decades of experience – he’s flown Black Hawks for the Idaho Army National Guard since 1998 – he’ll continue to coach and mentor the crew throughout the flight.

CW4 Craig briefs the crew on the route and tasks for the flight. The crew will fly to Ontario, Ore., return to Gowen Field and then practice landing on slopes outside the base while wearing night vision goggles. The two-hour flight has been scheduled to give the crew one hour of flight time during daylight and one hour at night.

The pilots take their seats and go through their run-up checklist. SGT Wilson sits on the right side of the Black Hawk, where the lead crew chief typically sits. SGT Gilman sits on the left side, and SGT Barber sits where he can observe both Soldiers.

SGT Wilson and SGT Gilman exit the helicopter before the pilots start the engine. They visually inspect specific movements the pilots make with the engine control levers. After ensuring the rotor system and engines are operating properly, SGT Wilson grabs the wheel chocks and climbs into his seat through his window.

The helicopter taxis down the runway. The pilots check the brakes and perform a health indicator test on the engines before making a final call to flight operations to get the all-clear to fly. CW2 Budge lifts the aircraft approximately 10 feet into the air and does a hover power check before heading to Ontario.

SGT Wilson and SGT Gilman watch for other aircraft and birds during the flight. Other than a few jokes among the crew and occasional talk between the pilots, things are pretty quiet once the Black Hawk is finally in the air.

It takes the crew about 25 minutes to reach Ontario. After the crew calculates how much fuel the Black Hawk is burning per hour, there isn’t much for the crew chiefs to do on the flight back. That changes quickly once the helicopter lands in Boise.

The sun is down by the time CW2 Budge lands the helicopter just east of Gowen Field. The crew quickly puts on night vision goggles, and the crew chiefs are ready to work.

For the next hour, CW2 Budge lands the aircraft on uneven terrain. He relies on SGT Wilson to his right and SGT Gilman on his left to let him know how far he is from the ground as he lands. Each crew chief puts his head outside the Black Hawk and verbally assists the pilot to the ground, one side at a time.

SGT Barber reminds each crew chief what to look for, and CW2 Budge lifts the helicopter up and down several times to let the crew chiefs practice.

“You don’t want to get fixated on one spot because your depth perception goes out the window,” SGT Wilson says. “You could be touching the ground and have no idea.”

CW2 Budge flies around to give the crew chiefs new landing spots and alternates landing on the left and right side of the aircraft. Helping land the Black Hawk on slopes isn’t the only task the crew chiefs must perform to progress, but it’s one of the most difficult tasks each must demonstrate during the flight.

While the Black Hawk is in the air, CW4 Craig tells CW2 Budge there is a simulated fire in the engine. CW2 Budge runs through his checklist and lands the helicopter as quickly as possible. The scenario accomplishes major training objectives for both CW2 Budge and the crew chiefs.

Like SGT Wilson, CW2 Budge has transferred from the AH-64 Apache to the Black Hawk. He’s still getting used to having help with landing his helicopter.

“I’m used to clearing my own aircraft,” CW2 Budge says. “With crew chiefs, I have the ability to clear the aircraft, but it’s with the help of the crew chief on the same side. He can see the whole area and can look behind the aircraft. As a new Black Hawk pilot, I just have to slow down a little bit and give them the chance to do so.”

After an hour of flying in the dark and landing the Black Hawk in dirt, CW2 Budge lands the Black Hawk on Gowen Field’s runway and taxis back to where the crew started the flight. After the pilots shut down the aircraft, SGT Wilson and SGT Gilman unload the radios and night vision goggles.

All five members of the crew help chain down the Black Hawk and store their flight bags in their lockers. Once back in the flight operations center, CW4 Craig and SGT Barber log the other crew members’ flight hours.

It’s been almost an hour since CW2 Budge landed the Black Hawk at Gowen Field for the final time, but the crew members don’t seem to be in a hurry to leave. They spend several minutes joking with each other and asking about each other’s families. Pilots and crew chiefs from other flights filter in and join the conversation.

After CW4 Craig and CW2 Budge head home, SGT Barber lets SGT Wilson and SGT Gilman know they both passed their progression flights. He gives them both additional feedback on their performance before SGT Wilson leaves for the night.

It’s after 2300 and SGT Wilson will have to be back to work in the morning. But first, he’ll make a stop on his way home for dinner.