In late March of 2018, then-SSG Natalie Wamsley was finishing up warrant officer candidate school (WOCS), maxing her last Army Physical Fitness Test and taking another successful step in her 16-year military career. On April 6, she learned she had cancer.

While at WOCS, she felt a lump, but disregarded it as muscle soreness from the intense physical fitness. A couple weeks after she returned home, and many sleepless nights later, she went to her doctor. After an ultrasound and a biopsy, she was called into her doctor’s office. 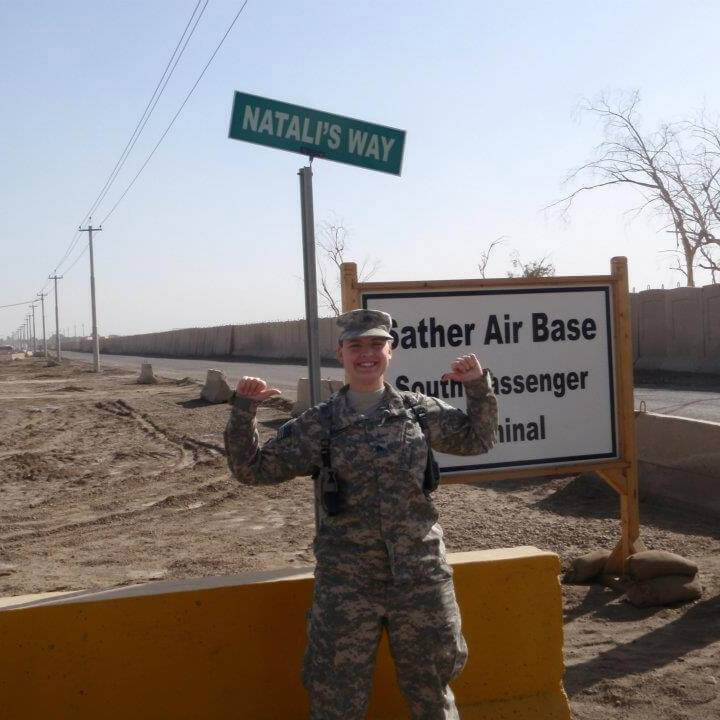 “I knew immediately what that meant,” she said. “All they would tell me was I had cancer, not how bad, how big, nothing like that. When you don’t know facts, your mind tends to spin out of control.”

What SSG Wamsley did know was how tortuous the week was before speaking with a surgeon. She was told she had an aggressive form of cancer that had spread to her lymph nodes and that it had developed three months prior.

“I thought, ‘I am too young for this.’  I have a lot more life to live.  I have a husband and two very small children. I have a lot to live for,” she said.  “But he said I was curable, so I continued to stay positive.”

Thanks to recent developments in science, doctors said she had a fighting chance. And fight she did. 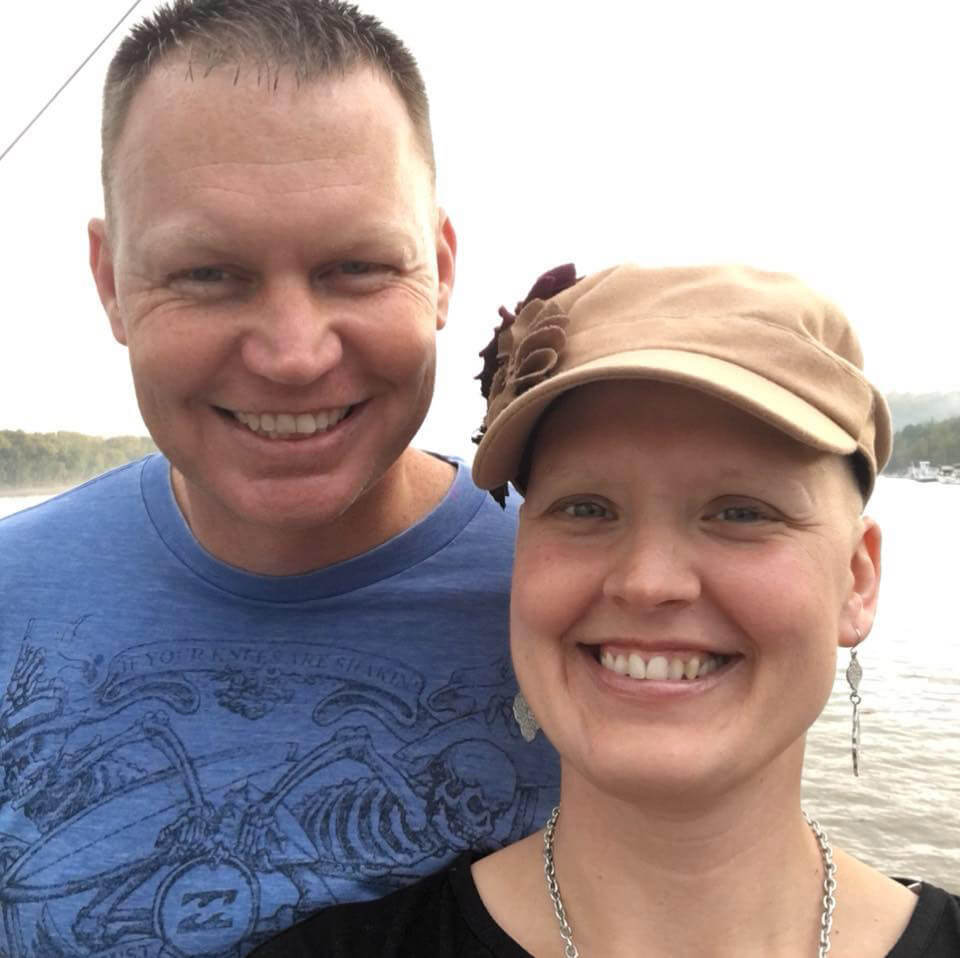 SSG Wamsley enlisted in the Guard while she was still in high school in 2003. She joined because of her grandfather’s military service and her involvement in Junior ROTC. She comes from a long line of Veterans, but was the first female to join. She served as a human resources specialist at the company and brigade level, including a deployment to Iraq in 2011.

“She was already looked upon as an expert in her field,” CWO Larry Arnett said. “She has excellent physical training (PT) scores and shows good leadership skills.”

SSG Wamsley said that mentorship and the desire to be a better version of herself drove her to the warrant officer path.

“I hope that I can be a role model for my children one day and show them they can do anything if you work hard and have the right people to guide you.”

That aggressive nature runs through SSG Wamsley in all she does. Less than two weeks after learning she had cancer, she started a high-dose chemotherapy.

After six rounds, however, the doctors were not satisfied with her progress, so a more intense regimen began. 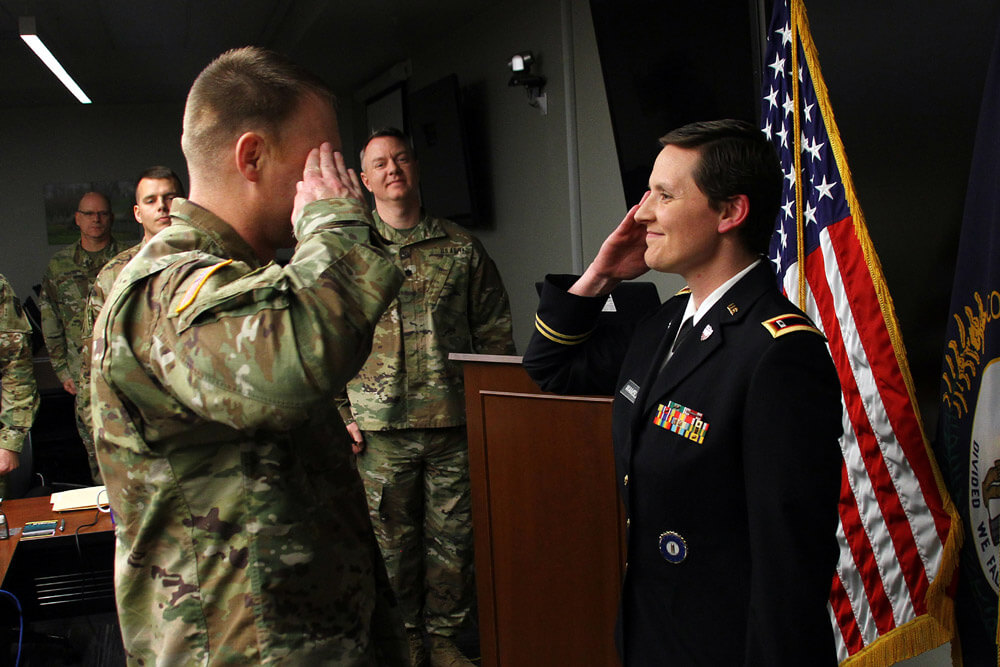 Then eight more rounds of chemo. Then surgery.

“I was told I had a ‘stubborn’ cancer, and the surgery didn’t get it all,” she said. “So they decided on more rounds of chemo.”

There were good days and not so good ones. Laughter and tears. Mentally she remained strong, but physically, she said, was a different story. Days when she could not pick her children up broke her heart, but not her determination.

“I was so scared I would lose her,” CW2 Wamsley said. “But we focused on one thing at a time. She made things so much easier by being so resilient.”

“She would apologize to me because she was too sick to help with the kids, but I said ‘Don’t worry about it, I got this.’ When she lost her hair, it didn’t even phase her. She still went to work and didn’t even cover up her hair loss. She always maintained a positive attitude.”

SSG Wamsley was then prescribed radiation therapy, which she is currently receiving five days a week. She went through all this while still preparing to be commissioned as a warrant officer.

“I was unsure how my appointment would go.  I kept telling myself, if it is not my time, it’s not my time.  There will be other opportunities,” she said. “But working out throughout my treatments helped my spirit, along with the strength and love of my husband, children and my Guard family.” 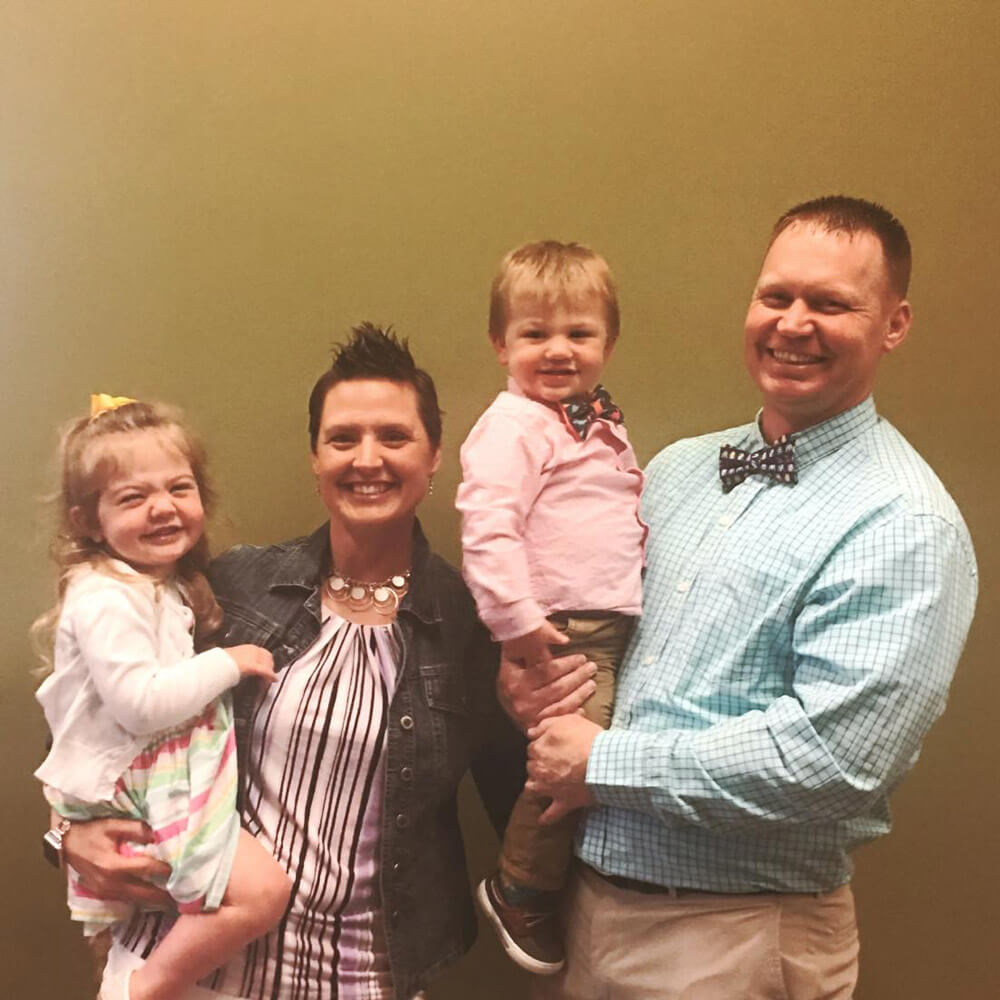 SSG Wamsley came off chemotherapy Jan. 30, and immediately came off profile early in order to take an Army Physical Fitness Test (APFT) in order to commission. She passed, impressing herself with her score. She was commissioned March 19 in front of a large crowd of friends and colleagues, all inspired by the woman standing in front of them.

She was pinned by CW2 Ronald Wamsley, who said he had never been more proud to be her husband. Together, they are the only warrant officer husband-wife pair in the Kentucky Guard. Both remain so grateful for the support they have received from their Guard family.

When you ask those friends, Guardsmen and civilians, you get “hero,” “fighter,” or “inspiration,” as immediate words describing WO1 Natalie Wamsley. CW2 Ronald Wamsley called her a beast for her consistently solid PT scores.  She, however, does not see or think of herself as a hero at all and said, “Everyone has their battles—this is just part of my fight and my story.”

LTC Travis Carpenter, deputy director of personnel for the Kentucky National Guard said a hero is someone who you wish to emulate and someone who has attributes you wish you had, like superpowers.

“Everyone has their idea of a hero,” he said. “Sergeant Wamsley is a personal hero of mine.”

“She’s gone through a lot of adversity lately, but comes to work every day with a smile on her face. She not only succeeded in a time of adversity, she excelled in a time that others may not.”

CWO Jennifer Maggard works with WO1 Natalie Wamsley in the G1. WO1 Wamsley said she has looked up to CWO Maggard as a mentor and as one of the few female warrant officers in Kentucky. CWO Maggard said it is actually CWO Wamsley who is the real role model.

“One word to describe Warrant Officer Wamsley would be inspiration,” CWO Maggard said. “She has always been an inspiration even before the battle with cancer. She is a natural leader who always goes above and beyond with her no quit, no excuse attitude. She inspires me to be better every single day in every part of life.”

WO1 Wamsley said her mantra during treatment became, “Your illness does not define you—your strength and courage does.”

“Everyone has their own fight, it’s how you come out of the fight.  I hope that I am a better person going through this and I hope through my story I can encourage someone to fight, because this life is worth living.”

END_OF_DOCUMENT_TOKEN_TO_BE_REPLACED

END_OF_DOCUMENT_TOKEN_TO_BE_REPLACED
Teammates in the Guard – Competitors in the Sky
CitizenSoldier 2017-10-27 December 3, 2018
Always Ready