At just 16 years old, CW3 Albert Thiem joined the Vermont Army National Guard and began on a winding path of unexpected career endeavors. After close to 38 years of dedicated service in the Army National Guard, CW3 Thiem stands as a shining example of how Soldiers can take advantage of the many different avenues of opportunities offered by the Guard to propel them­selves to a long, diverse and successful career. It is quite an impressive story for someone who originally joined the Guard on a whim. 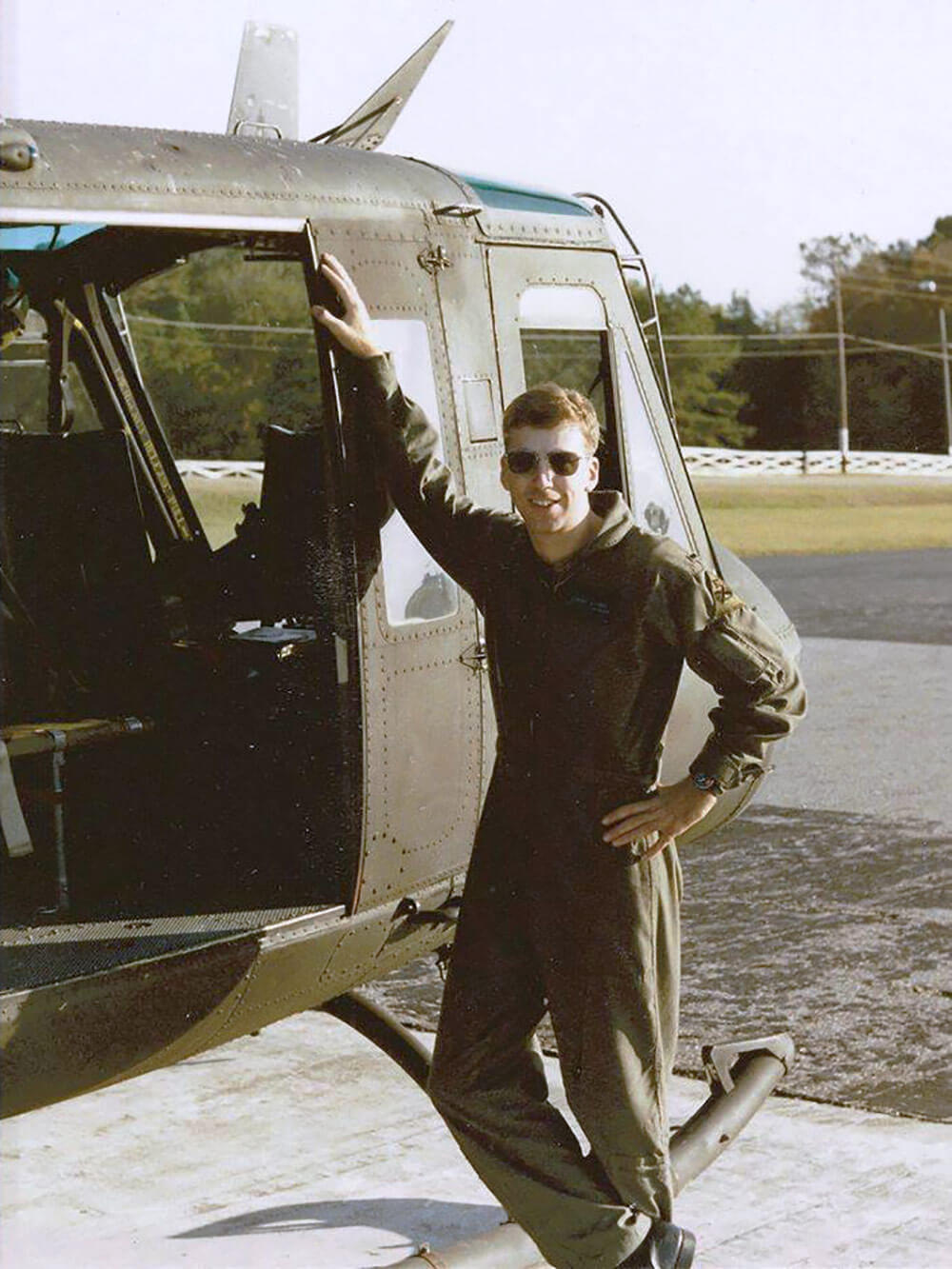 “Essentially, I had no idea what I wanted to do,” CW3 Thiem explained. “I didn’t have much money and needed a break between high school and college. I was still rather young, too, so I thought I would try something different.”

He enlisted in the Vermont Army National Guard on June 6, 1981, the Remembrance Day of D-Day. He went off to basic training at Fort McClellan, Alabama, and became a chemical operations specialist for the 2nd Battalion, 172nd Armor. While still active with the 172nd, he enrolled at Castleton State College in Vermont. During his sophomore year, then-SPC Thiem joined ROTC under the Simultaneous Membership Program (SMP), a program that allows Soldiers to serve in the Guard and their college’s ROTC program at the same time.

“I had some time in, so I was able to become a junior in the ROTC program,” CW3 Thiem explained. “Since I had prior service, I was actually commissioned during my junior year of college.” 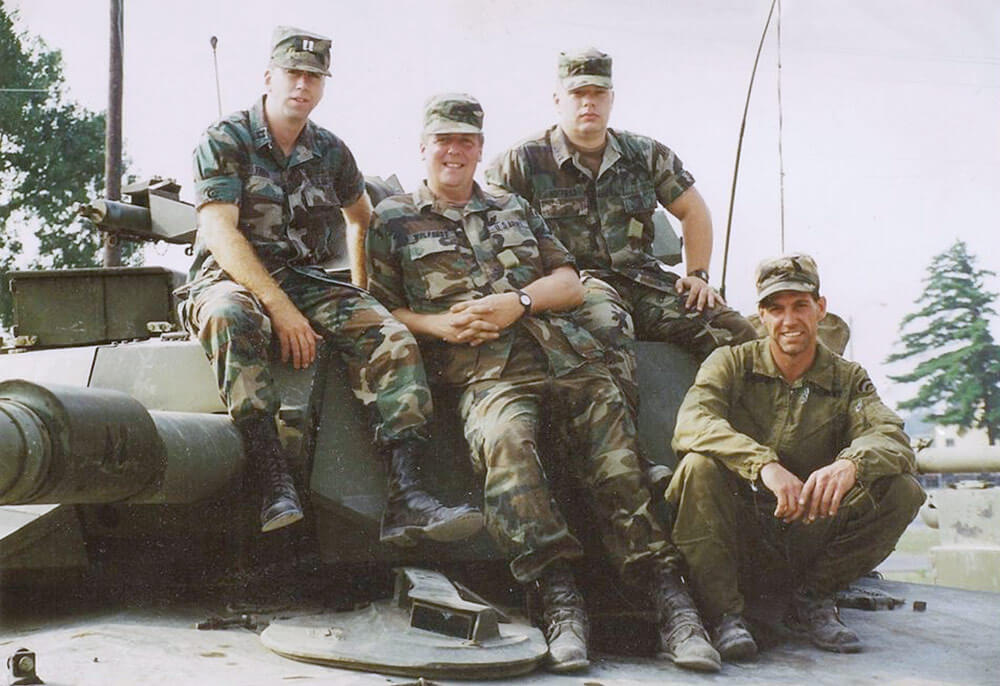 At this point, CW3 Thiem had his sights set on aviation. However, his path to aviation would not be a straight one.

“My hopes and dreams then were aviation,” he recalled. “I found out that I was branched armor and I became an armor officer after completing college. Armor wasn’t initially what I wanted, but I embraced it and went forward with it. The caveat to that was I had to complete my officer basic upon completion [of school] so I completed my armor officer basic course at Fort Knox, Kentucky, during the summer of 1986.” 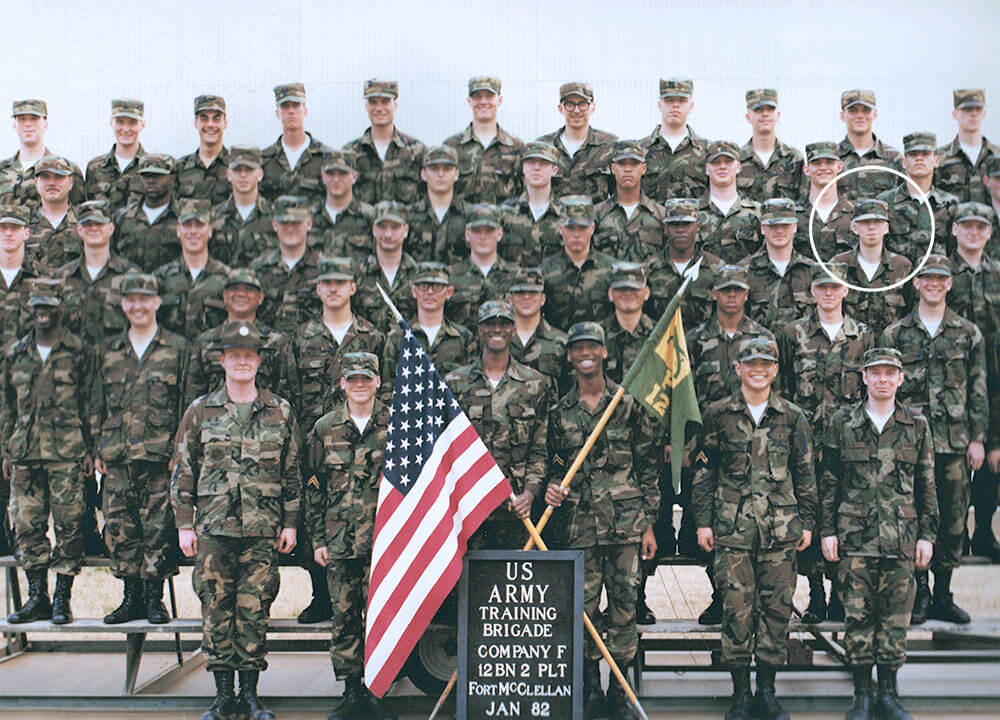 From there, CW3 Thiem was assigned to the brigade headquarters of 2nd Battalion, 172nd Armor. Still passionate about aviation, he had his name put on a waiting list for flight school. In 1987, his name was selected.

“I was thrilled once the aviation opportunity came to be,” he noted.

CW3 Thiem attended flight school at Fort Rucker, Alabama. After graduating in 1989, he became a pilot and an aviation platoon leader for the 1-126th General Support Aviation Company in Burlington, Vermont, until June of 1991.

He was then assigned as Detachment Commander of the 150th Air Traffic Control Platoon. As he was living in the neighboring State of New York, CW3 Thiem’s three-hour commute from his hometown in Troy to his Guard unit in Burlington, Vermont, was becoming burdensome for both himself and his Family. After serving with the 150th for two years, he learned of a position with the New York Army National Guard’s 42nd Infantry Division, which was based just 30 minutes from his home. CW3 Thiem jumped at the opportunity. 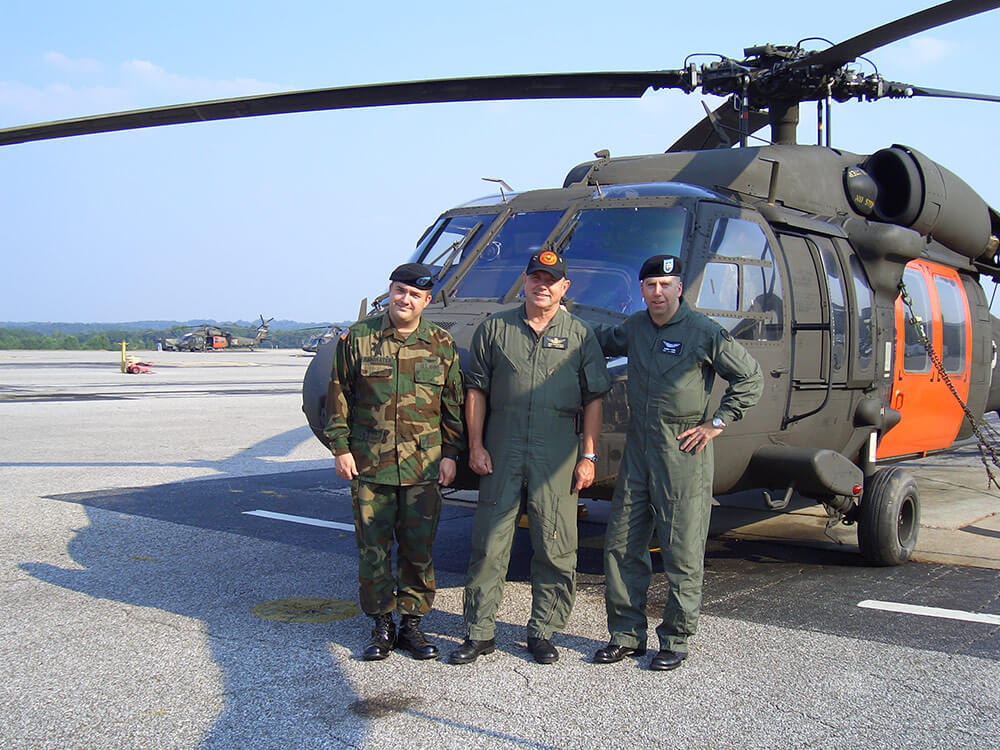 CW3 Thiem was chosen for the Assistant G3 Air position with the 42nd Infantry Division in 1993. After serving in that position for two years, another opportunity emerged in June of 1995 that allowed him to get back to his roots and utilize his experience in armor.

“An opportunity came up for another command, but it was in armor,” said CW3 Thiem. “From June of 1995 through June of 1998 I [went back to armor and] was an armor company commander. I used my experience in the two branches [armor and aviation] to my advantage, jumping from one to another.”

After his role as an armor company commander for the 101st Cavalry Regiment, CW3 Thiem returned to the 42nd Infantry Division in June 1998 as the assistant air operations and planning officer (G3-Air). In 2000, he became the G3-Air and held that role for four years. 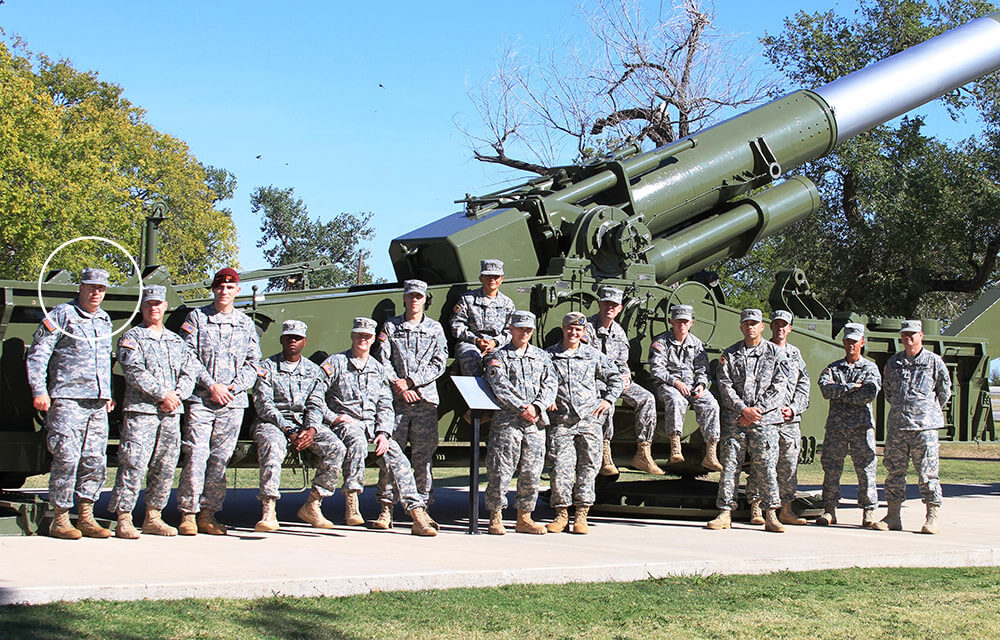 It was in 2004, while CW3 Thiem was serving as the G3-Air, that he deployed to Iraq in support of Operation Iraqi Freedom. He worked in the 42nd Division Main Headquarters in one of Saddam Hussein’s former palaces in Tikrit, Iraq. Following that deployment, CW3 Thiem remained with the 42nd Infantry Division until he was approaching his mandatory retirement date (MRD) in June of 2013. When he looked towards retirement and back on his tremendous service, he realized he was not ready to leave it all behind.

“I had held various staff positions up to that point and thought to myself that at the age of 49, I wasn’t ready to get out,” he explained. “I felt I had more to do and more that I could [offer]. The thought of leaving the uniform and the duty after so many years was very hard.”

To find an alternative route, CW3 Thiem spoke with a warrant officer recruiter who had reverted from an officer to a warrant officer. While the transition was unusual, it was possible. The New York Army National Guard was in need of electronic warfare officers, and while CW3 Thiem did not have direct experience, his technical abilities, top secret security clearance and willingness to dedicate his time to the role made him a perfect candidate.

“I had a pretty good depth of experience, so it was a good fit for both parties,” said CW3 Thiem. “It allowed me to continue on and serve in the Guard like I’ve enjoyed doing for so many years.” 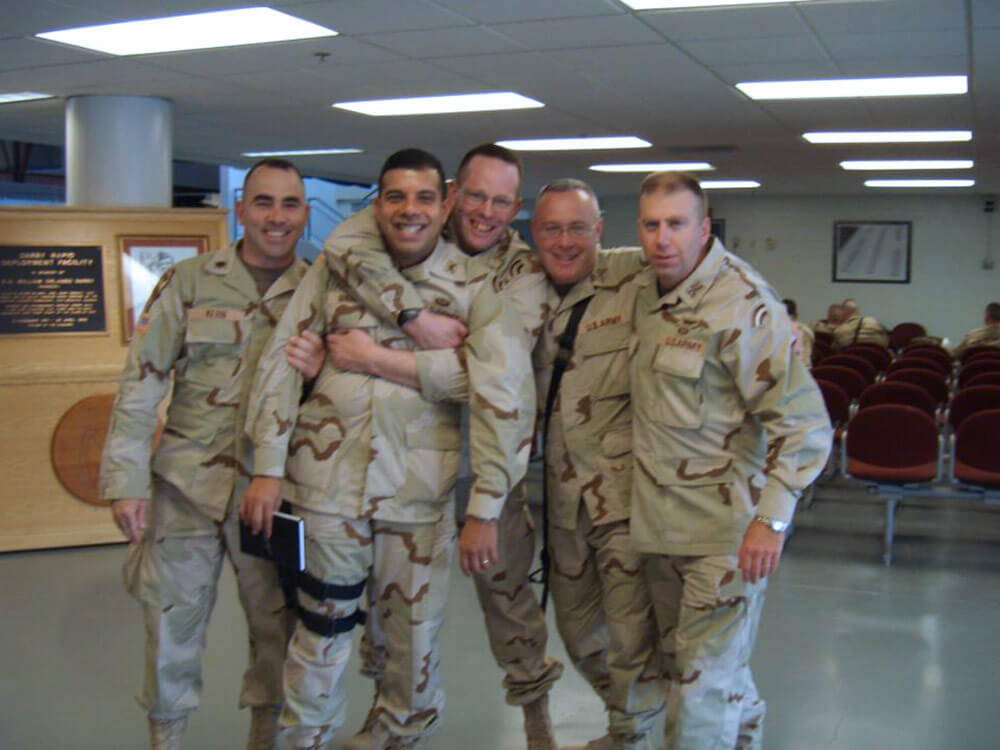 In 2014, CW3 Thiem graduated from the Electronic Warfare Warrant Officer Basic Course at Fort Sill, Oklahoma, and returned to the 42nd Infantry Division as an electronic warfare technician. That type of transition is rare and can be difficult for Soldiers to complete. CW3 Thiem attributes his success in the transition to his supportive peers and his easy-going temperament.

“For me, it was easy transitioning to warrant,” CW3 Thiem said. “I still worked with the same people that I worked with before. In some cases, the people I worked for that I rated, they rated me later. That part was awkward. But I don’t carry an ego or anything like that. I’m a pretty low-key kind of person as far as personality, so I had zero issues with the transition.” 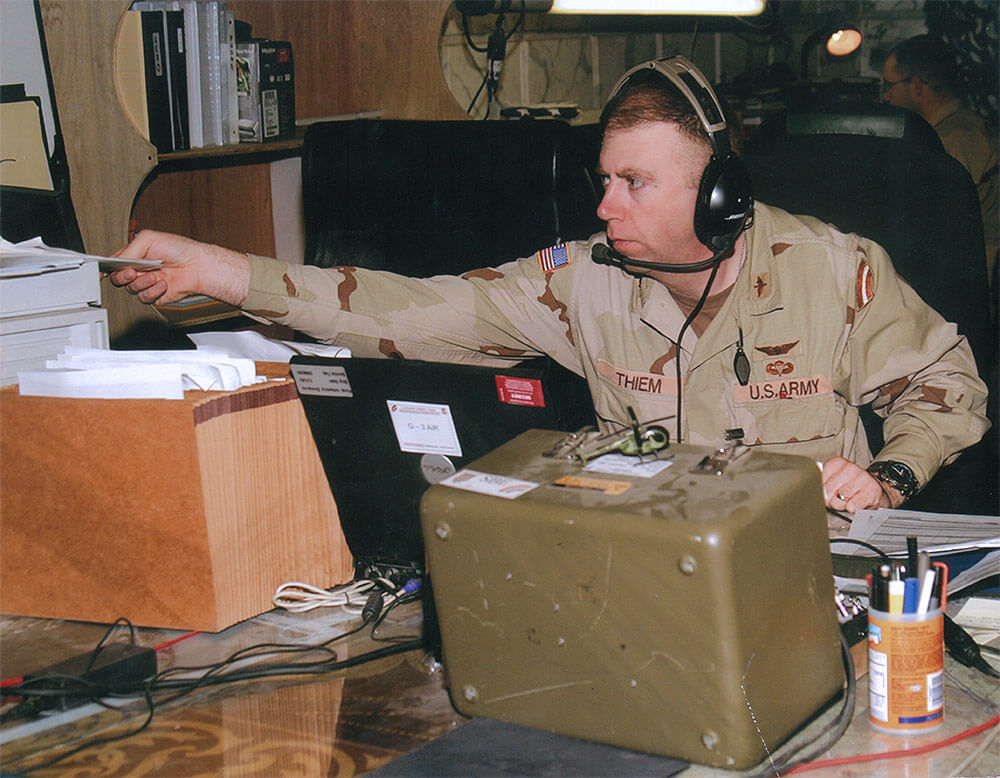 Since his transition, CW3 Thiem has participated in four Warfighter exercises—a two-week command and control exercise that tests and evaluates a headquarters reaction and methods of battle—two at division level, two at brigade level, as well as a Joint Readiness Training Center rotation. He is now deployed to Fort Meade, Maryland, as part of Task Force Echo, a cyber unit focused on supporting cyber operations and carrying out the defense of the Army network, until the spring of 2019.

With a career spanning close to four decades, CW3 Thiem has accumulated a host of awards and decorations, including the Bronze Star, the Global War on Terrorism Expeditionary Medal and eight Army Reserve Component Achievement Medals. His time in the Guard has encompassed responding to ice storms, hurricanes, the 9/11 attacks and more. He has experienced the equivalent of multiple military careers within his years of service. From enlisted, to officer, to warrant officer, CW3 Thiem’s unique career is characterized by his willingness to adjust, adapt and revel in the opportunities presented to him.

“My purpose initially in the Guard was to buy a little time, get a little experience and to help with education, but it led to so much more than that,” he commented. “I never imagined this [career] in my wildest dreams.” 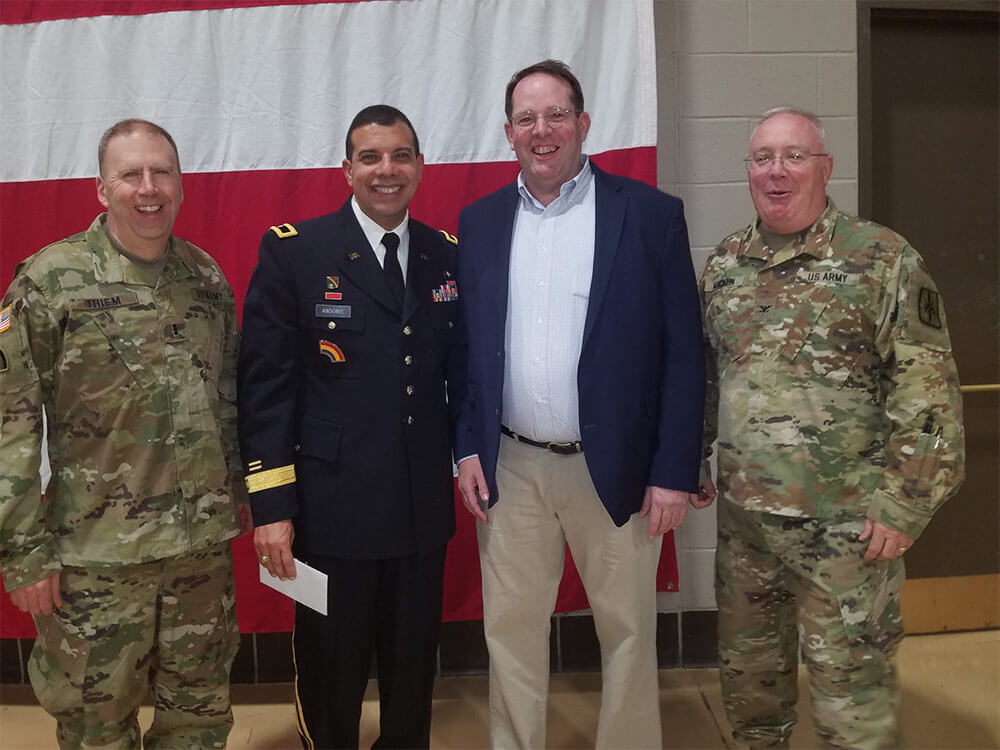 For Soldiers looking to grow their careers by leveraging the same approach and opportunities as CW3 Thiem, he recommends staying active and hands on when it comes to looking for new opportunities.

“Every Soldier needs to be their own manager of their career, because you can’t depend on other people to manage it for you,” he noted. “It is something that you need to take hold of and [do] for yourself.”

He also emphasized the importance of persistence and passion for your service, in addition to accepting help from others. 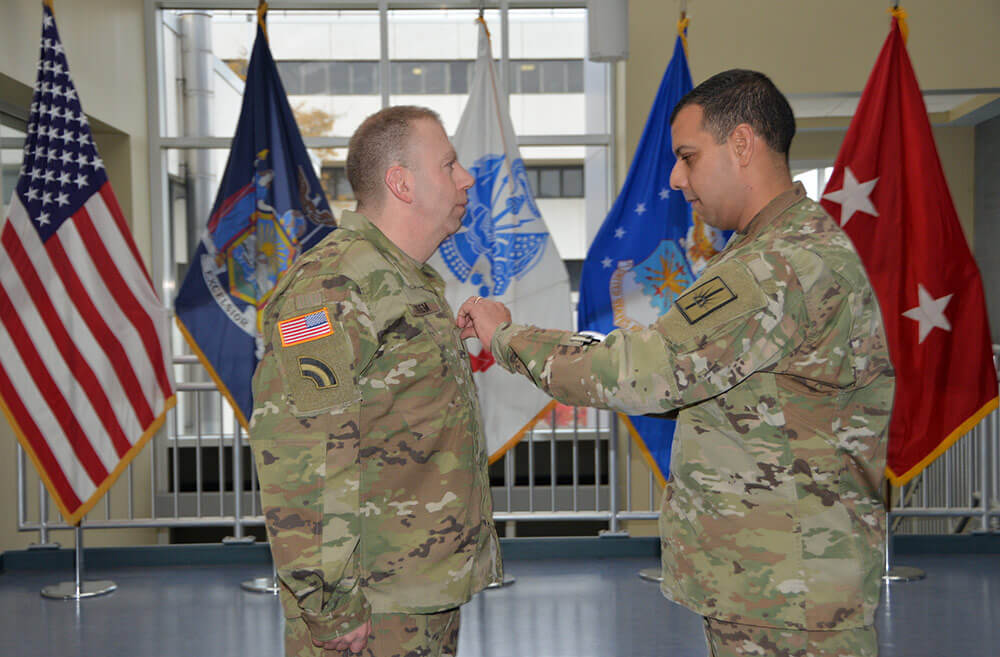 “The key thing is, if it’s something you enjoy and love, it’s all about perseverance and dedication,” he said. “There’s going to be some rough times before there are good times and vice versa. Sometimes, you can’t see the forest through the trees when you’re at the lower grade.

“But there are people who will help you along the way,” he continued. “An important lesson I’ve learned is to trust your fellow Soldiers, peers and subordinates because 99 percent of the time they will try to do the right thing [to help you].”

As retirement approaches again for CW3 Thiem, he can finally see himself retiring from military service. It is safe to say, however, that CW3 Thiem is in no rush to end his incredible career and plans on making the most of his final years in the Guard. 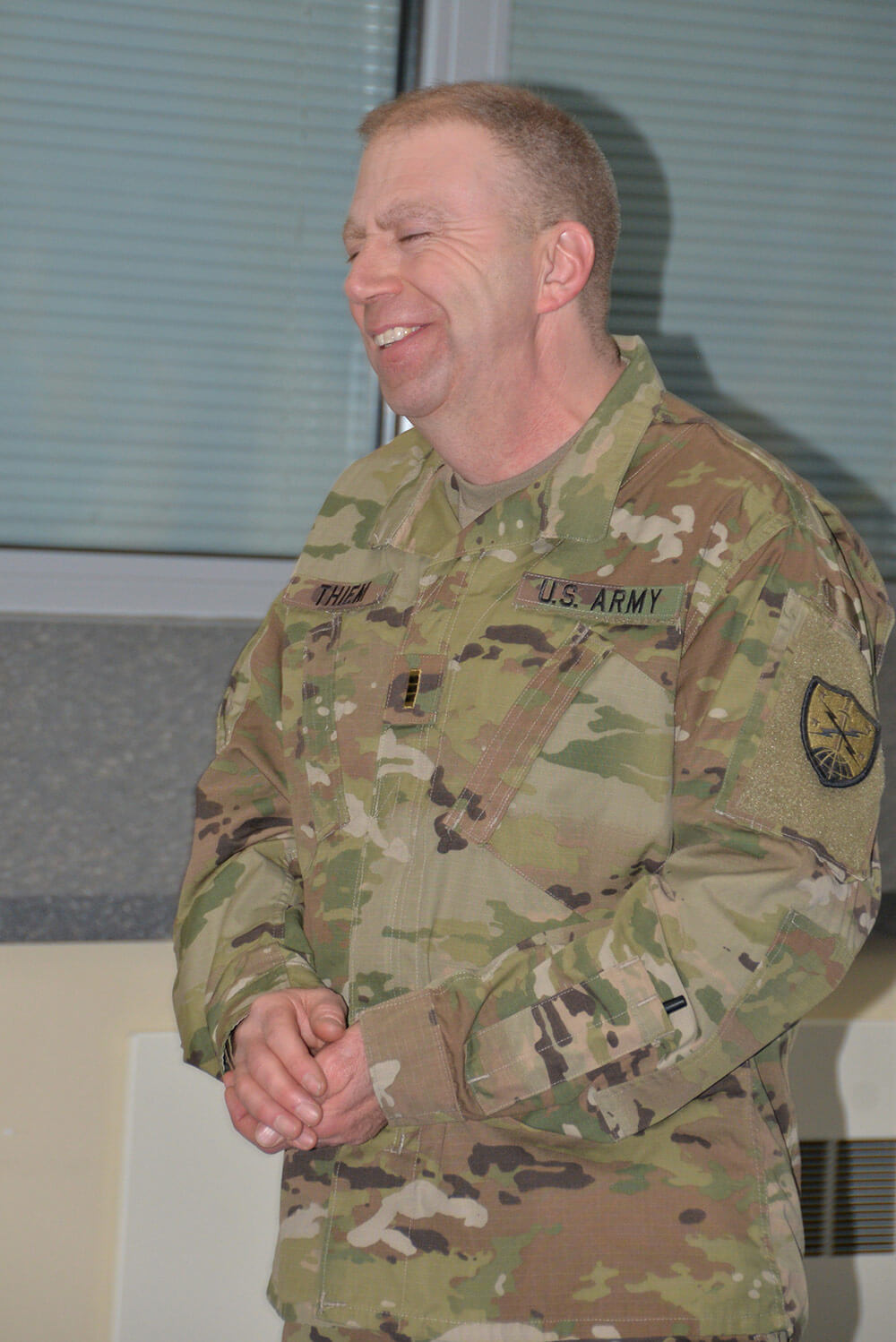 “I could stay for four more years and most likely, I will stay until that point when I can earn my retirement pay,” he explained. “After this [Task Force Echo] deployment, I think the age of 59 is my goal for retirement. I can go until that day, and possibly have another deployment during that time. We’ll see how it shakes out.”

END_OF_DOCUMENT_TOKEN_TO_BE_REPLACED

END_OF_DOCUMENT_TOKEN_TO_BE_REPLACED
Teammates in the Guard – Competitors in the Sky
CitizenSoldier 2017-10-27 December 3, 2018
Always Ready